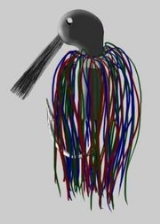 Encyclopedia
Jigging is the practice of fishing
Fishing
Fishing is the activity of trying to catch wild fish. Fish are normally caught in the wild. Techniques for catching fish include hand gathering, spearing, netting, angling and trapping....
with a jig, a type of fishing lure
Fishing lure
A fishing lure is an object attached to the end of a fishing line which is designed to resemble and move like the prey of a fish. The purpose of the lure is to use movement, vibration, and colour to catch the fish's attention so it bites the hook...
. A jig consists of a lead sinker with a hook molded into it and usually covered by a soft body to attract fish. Jigs are intended to create a jerky, vertical motion, as opposed to spinnerbait
Spinnerbait
A Spinnerbait refers to any one of a family of fishing lures that get their name from one or more metal blades shaped so as to spin like a propeller when the lure is in motion, creating varying degrees of flash and vibration that mimics small fish or other prey...
s which move through the water horizontally. The jig is very versatile and can be used in both salt and fresh water. Many species are attracted to the lure which has made it popular amongst anglers for years.

For successful jigging, the jigger needs to use a rod which is good for feeling a strike, and needs to stay in contact with the lure and get it to where the fish are. Most fish caught by jigs are on or near the bottom. 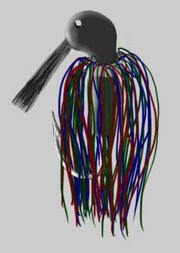 The head of a jig can consist of many different shapes and colors along with different features. The most common is the round head, but others include fish head shaped, coned shaped, or any number of varieties. The three most popular jighead shapes in bass fishing are the flipping jighead (pictured above), the football jighead, and the grass jighead. These heads come in many different weights usually ranging from 1/80th of an ounce to nearly a pound for large saltwater bottomfish. They can also be found in a wide array of colors and patterns. The hooks also vary. These variances can be on the hook type, color, angle of the hook or the material of the hook. Some jig heads even offer a weed guard.

There is a wide array of bodies for jigs. The most common is made out of rubber
Rubber
Natural rubber, also called India rubber or caoutchouc, is an elastomer that was originally derived from latex, a milky colloid produced by some plants. The plants would be ‘tapped’, that is, an incision made into the bark of the tree and the sticky, milk colored latex sap collected and refined...
or silicone
Silicone
Silicones are inert, synthetic compounds with a variety of forms and uses. Typically heat-resistant and rubber-like, they are used in sealants, adhesives, lubricants, medical applications , cookware, and insulation....
. These come in many shapes and can resemble a grub, frog shaped, fish shaped, paddle tail, lizards, or different insects. The colors of these can range from bright yellow to a transparent brown with silver and red flakes. Also during summer months look at colors for the heat such as browns, or blue with black hair. Many others catch fish like smallmouth bass and largemouth bass.

Other, more traditional types use dyed or natural whitetail deer tail hair on the outside. Called a bucktail jig, they are widely used in the northern and midwestern United States, where many are still hand tied by anglers.

Other types of materials are also used in constructing jig bodies, such as a Chenille wrap on the hook shaft, various feather hackle, hairs or other fur, marabou, Flashabou, and other materials. Construction is often similar to the process of Fly tying
Fly tying
Fly tying is the process of producing an artificial fly to be used by anglers to catch fish via means of fly fishing. Probably the most concise description of fly tying is the one by Helen Shaw, a preeminent American professional fly tyer in Fly-Tying....
. Some jigs are constructed identically to their artificial fly counterparts, one example a "Wooly Bugger" fly but tied on a jig head.

Bodies can be either brightly colored or subdued. They are often designed to mimic local prey fish or large local insects.