Encyclopedia
The Jerusalem Trail, is a hiking path that extends the Israel National Trail
Israel National Trail
The Israel National Trail, is a hiking path that crosses the entire country of Israel. Its northern end is at Dan, near the Lebanese border in the far north of the country, and it extends to Eilat at the southernmost tip of Israel on the Red Sea, a length of approximately 940 km...
into Jerusalem. The trail
Trail
A trail is a path with a rough beaten or dirt/stone surface used for travel. Trails may be for use only by walkers and in some places are the main access route to remote settlements...
is almost a complete circuit, and can be extended to a full loop by following Israel National Trail marks. The length is approximately 42 km (26mi). The trail is marked with a gold line between two blue lines and takes an average of two days to complete. It was opened to the public in 2006.

The trail combines cultural and historical places with national parks around Jerusalem. It goes to many museums, the Knesset
Knesset
The Knesset is the unicameral legislature of Israel, located in Givat Ram, Jerusalem.-Role in Israeli Government :The legislative branch of the Israeli government, the Knesset passes all laws, elects the President and Prime Minister , approves the cabinet, and supervises the work of the government...
, the City of David, Mahane Yehuda Market
Mahane Yehuda Market
Mahane Yehuda Market , often referred to as "The Shuk", is an outdoor marketplace in Jerusalem, Israel. Popular with locals and tourists alike, the market's more than 250 vendors sell fresh fruits and vegetables; baked goods; fish, meat and cheeses; nuts, seeds, and spices; wines and liquors;...
, Sataf
Sataf
Sataf was an Arab village in the District of Jerusalem depopulated during the 1948 Arab–Israeli War. It is located 10 km west of Jerusalem, with Sorek riverbed bordering the east....
, the Hebrew University of Jerusalem
Hebrew University of Jerusalem
The Hebrew University of Jerusalem ; ; abbreviated HUJI) is Israel's second-oldest university, after the Technion – Israel Institute of Technology. The Hebrew University has three campuses in Jerusalem and one in Rehovot. The world's largest Jewish studies library is located on its Edmond J...
and numerous other sites. 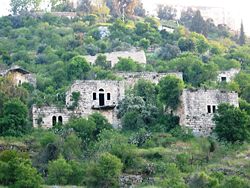