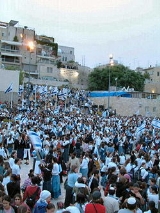 Encyclopedia
Jerusalem Day is an Israeli national holiday commemorating the reunification of Jerusalem and the establishment of Israeli control over the Old City in June 1967. The Chief Rabbinate of Israel
Chief Rabbinate of Israel
The Chief Rabbinate of Israel is recognized by law as the supreme halakhic and spiritual authority for the Jewish people in Israel. The Chief Rabbinate Council assists the two chief rabbis, who alternate in its presidency. It has legal and administrative authority to organize religious...
declared Jerusalem Day a minor religious holiday to thank God for victory in the Six-Day War
Six-Day War
The Six-Day War , also known as the June War, 1967 Arab-Israeli War, or Third Arab-Israeli War, was fought between June 5 and 10, 1967, by Israel and the neighboring states of Egypt , Jordan, and Syria...
and for answering the 2,000-year-old prayer of "Next Year in Jerusalem".

The day is marked by state ceremonies, memorial services for soldiers who died in the battle for Jerusalem, parades through downtown Jerusalem, reciting the Hallel
Hallel
Hallel is a Jewish prayer—a verbatim recitation from Psalms 113–118, which is used for praise and thanksgiving that is recited by observant Jews on Jewish holidays.-Holy days:...
prayer with blessings in synagogues, and saying the Pesukei Dezimra of Sabbath and High Holidays. There are also lectures on Jerusalem-related topics, singing and dancing, and special television programming. Schoolchildren throughout the country learn about the significance of Jerusalem, and schools in Jerusalem hold festive assemblies. The day is also marked in Jewish schools around the world. 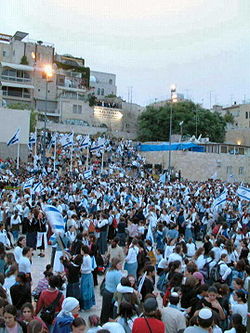 Under the 1947 UN Partition Plan
1947 UN Partition Plan
The United Nations Partition Plan for Palestine was created by the United Nations Special Committee on Palestine in 1947 to replace the British Mandate for Palestine with "Independent Arab and Jewish States" and a "Special International Regime for the City of Jerusalem" administered by the United...
, which proposed the establishment of two states in the British Mandate of Palestine—a Jewish state and an Arab state—Jerusalem was to be an international city, neither exclusively Arab nor Jewish for a period of ten years, at which point a referendum would be held by Jerusalem residents to determine which country to join. The Jewish leadership accepted the plan, including the internationalization of Jerusalem, but the Arabs rejected the proposal.

This state of affairs changed in 1967 as a result of the Six-Day War
Six-Day War
The Six-Day War , also known as the June War, 1967 Arab-Israeli War, or Third Arab-Israeli War, was fought between June 5 and 10, 1967, by Israel and the neighboring states of Egypt , Jordan, and Syria...
. Before the start of the war, Israel sent a message to King Hussein of Jordan saying that Israel would not attack Jerusalem or the West Bank as long as the Jordanian front remained quiet. Urged by Egyptian pressure and based on deceptive intelligence reports, Jordan began shelling civilian locations in Israel to which Israel responded on June 6 by opening the eastern front. The following day, June 7, 1967 (28 Iyar 5727), Israel captured the Old City of Jerusalem.

Later that day, Defense Minister Moshe Dayan
Moshe Dayan
Moshe Dayan was an Israeli military leader and politician. The fourth Chief of Staff of the Israel Defense Forces , he became a fighting symbol to the world of the new State of Israel...
declared what is often quoted during Yom Yerushalayim:
The war ended with a ceasefire on June 11, 1967.

On May 12, 1968, the government proclaimed a new holiday—Jerusalem Day—to be celebrated on the 28th of Iyar, the Hebrew date
Hebrew calendar
The Hebrew calendar , or Jewish calendar, is a lunisolar calendar used today predominantly for Jewish religious observances. It determines the dates for Jewish holidays and the appropriate public reading of Torah portions, yahrzeits , and daily Psalm reading, among many ceremonial uses...
on which the divided city of Jerusalem became one. On March 23, 1998, the Knesset passed the Jerusalem Day Law, making the day a national holiday.

One of the themes of Jerusalem Day, based on a verse from the Book of Psalms, is "Ke'ir shechubra la yachdav"—"Built-up Jerusalem is like a city that was joined together" (Psalm
Psalms
The Book of Psalms , commonly referred to simply as Psalms, is a book of the Hebrew Bible and the Christian Bible...
122:3).

Although most Haredim are averse to observing days associated with the modern State of Israel, Yom Yerushalayim is an exception and some will observe it in various ways. This is because it marks the time from which Jews could once again pray at the Western Wall
Western Wall
The Western Wall, Wailing Wall or Kotel is located in the Old City of Jerusalem at the foot of the western side of the Temple Mount...
.

The slogan for Jerusalem Day 2007, marking the 40th anniversary of the reunification of Jerusalem, was "Mashehu Meyuhad leKol Ehad" , punning on the words "meyuhad" (special) and "me'uhad" (united). To mark the anniversary, the approach to Jerusalem on the Jerusalem-Tel Aviv highway was illuminated with decorative blue lighting which remained in place throughout the year.