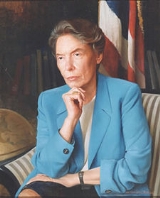 She is known for her "Kirkpatrick Doctrine
Kirkpatrick Doctrine
The Kirkpatrick Doctrine was the doctrine expounded by United States Ambassador to the United Nations Jeane Kirkpatrick in the early 1980s based on her 1979 essay, "Dictatorships and Double Standards". The doctrine was used to justify the U.S...
," which advocated U.S. support of anticommunist governments around the world, including authoritarian
Authoritarianism
Authoritarianism is a form of social organization characterized by submission to authority. It is usually opposed to individualism and democracy...
dictatorships, if they went along with Washington's aims—believing they could be led into democracy by example.

"When our Marines, sent to Lebanon on a multinational peacekeeping mission with the consent of the United States Congress, were murdered in their sleep, the "blame America first crowd" didn't blame the terrorists who murdered the Marines, they blamed the United States. But then, they always blame America first. . . . The American people know better." : Speech delivered at the 1984 Republican National Convention

"No idea holds greater sway in the minds of educated Americans that the belief that it is possible to democratize governments anytime and anywhere under any circumstances ." :Dictatorship and Double Standards, Commentary (New York, Nov. 1979), quoted in The Economist , 23 December 2006:131

"Decades, if not centuries are normally required for people to acquire the necessary disciplines and habits. (for democracy) In Britain, the road to (democratic government) took seven centuries to traverse ." :Dictatorship and Double Standards, Commentary (New York, Nov. 1979), quoted in The Economist , 23 December 2006:131