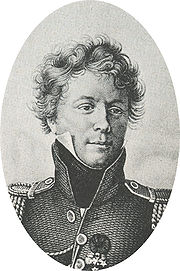 Jean Baptiste Bory de Saint-Vincent (6 July 1778 – 22 December 1846) was a French
France
The French Republic , The French Republic , The French Republic , (commonly known as France , is a unitary semi-presidential republic in Western Europe with several overseas territories and islands located on other continents and in the Indian, Pacific, and Atlantic oceans. Metropolitan France...
naturalist
Natural history
Natural history is the scientific research of plants or animals, leaning more towards observational rather than experimental methods of study, and encompasses more research published in magazines than in academic journals. Grouped among the natural sciences, natural history is the systematic study...
. (His personal name is variously reported, including "Jean Baptiste Marcellin" and "Jean Baptiste George Marie".)

He was born at Agen
Agen
Agen is a commune in the Lot-et-Garonne department in Aquitaine in south-western France. It lies on the river Garonne southeast of Bordeaux. It is the capital of the department.-Economy:The town has a higher level of unemployment than the national average...
. He was sent as naturalist with Captain Nicolas Baudin
Nicolas Baudin
Nicolas-Thomas Baudin was a French explorer, cartographer, naturalist and hydrographer.Baudin was born a commoner in Saint-Martin-de-Ré on the Île de Ré. At the age of fifteen he joined the merchant navy, and at twenty joined the French East India Company...
's expedition to Australia
Australia
Australia , officially the Commonwealth of Australia, is a country in the Southern Hemisphere comprising the mainland of the Australian continent, the island of Tasmania, and numerous smaller islands in the Indian and Pacific Oceans. It is the world's sixth-largest country by total area...
in 1798, but left the vessel at Mauritius
Mauritius
Mauritius , officially the Republic of Mauritius is an island nation off the southeast coast of the African continent in the southwest Indian Ocean, about east of Madagascar...
, and spent two years in exploring Réunion
Réunion
Réunion is a French island with a population of about 800,000 located in the Indian Ocean, east of Madagascar, about south west of Mauritius, the nearest island.Administratively, Réunion is one of the overseas departments of France...
and other islands in the Indian Ocean
Indian Ocean
The Indian Ocean is the third largest of the world's oceanic divisions, covering approximately 20% of the water on the Earth's surface. It is bounded on the north by the Indian Subcontinent and Arabian Peninsula ; on the west by eastern Africa; on the east by Indochina, the Sunda Islands, and...
. Joining the army on his return, he was present at the battle of Ulm
Battle of Ulm
The Battle of Ulm was a series of minor skirmishes at the end of Napoleon Bonaparte's Ulm Campaign, culminating in the surrender of an entire Austrian army near Ulm in Württemberg....
and battle of Austerlitz
Battle of Austerlitz
The Battle of Austerlitz, also known as the Battle of the Three Emperors, was one of Napoleon's greatest victories, where the French Empire effectively crushed the Third Coalition...
, and in 1808 went to Spain
Spain
Spain , officially the Kingdom of Spain languages]] under the European Charter for Regional or Minority Languages. In each of these, Spain's official name is as follows:;;;;;;), is a country and member state of the European Union located in southwestern Europe on the Iberian Peninsula...
with Marshal Soult.

In 1815, he supported Napoleon and opposed the Bourbons
House of Bourbon
The House of Bourbon is a European royal house, a branch of the Capetian dynasty . Bourbon kings first ruled Navarre and France in the 16th century. By the 18th century, members of the Bourbon dynasty also held thrones in Spain, Naples, Sicily, and Parma...
. Consequently he was proscribed after the Bourbon restoration. But after several years of exile, he was allowed to return quietly to Paris
Paris
Paris is the capital and largest city in France, situated on the river Seine, in northern France, at the heart of the Île-de-France region...
in 1820. In 1829 he headed a scientific expedition to the Peloponnese
Peloponnese
The Peloponnese, Peloponnesos or Peloponnesus , is a large peninsula , located in a region of southern Greece, forming the part of the country south of the Gulf of Corinth...
, and in 1839 he had charge of the exploration of Algeria
Algeria
Algeria , officially the People's Democratic Republic of Algeria , also formally referred to as the Democratic and Popular Republic of Algeria, is a country in the Maghreb region of Northwest Africa with Algiers as its capital.In terms of land area, it is the largest country in Africa and the Arab...
.

He was editor of the Dictionnaire classique d'histoire naturelle (Classical Dictionary of Natural History).
His own publications include: