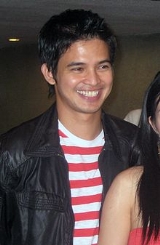 Abalos is a member of ABS-CBN
ABS-CBN
ABS–CBN Corporation is a Philippine-based media conglomerate. It is the Philippines' largest media and entertainment conglomerate. The corporation was the merger of Alto Broadcasting System which at that time owned by James Lindenberg and Antonio Quirino, and the Chronicle Broadcasting Network ...
's circle of homegrown talents named Star Magic
Star Magic
Star Magic, Inc., , is ABS-CBN's training and management program for its contract talents. It was designed to assist young talent in the Philippines...
. He was discovered after joining Star Circle Quest
Star Circle Quest
Star Circle Quest was a reality-based talent search in where at least 10 teen-aged contestants, called as "Questors", will undergo talent training, physical enhancement and different challenges to test their talent skills. Every week, one will be eliminated and the last Questor who will remain...
, a reality show in search of new actors.

Abalos, 26, on August 7, 2008, won Best Performance by Male or Female, Adult or Child, Individual or Ensemble in Leading or Supporting Role award in the Young Critics Circle Annual Citation held at the Faculty Center Conference (Pulungang Recto, Bulwagang Rizal) Hall of the University of the Philippines Diliman, Quezon City. The award was for his role in the indie film “Adela,” directed by Adolf Alix, Jr. and starring Anita Linda
Anita Linda
Anita Linda is a two-time FAMAS award-winning and Gawad Urian award-winning Filipino film actress. A romantic lead in her youth, she later gained critical acclaim for her portrayals in maternal or elderly roles...
(in the 2008 Cinemalaya Independent Film Festival
Cinemalaya Independent Film Festival
The Cinemalaya Philippine Independent Film Festival is a film festival in the Philippines held annually in the month of July at the Cultural Center of the Philippines. Its aim is the development and promotion of Filipino independent film...
).

On October 1, 2008, Abalos won the Best Actor in the 2008 Gawad Urian Awards
Gawad Urian Awards
The Gawad Urian Awards are annual film awards in the Philippines held since 1977. It is given by the Manunuri ng Pelikulang Pilipino and is currently regarded as the counterpart of the United States' New York Film Critics Circle....
for “Endo.”

He presently studies at UST
UST
UST is a three letter acronym that may refer to:* Equatorial Guinea Workers' Union* Hong Kong University of Science and Technology * Northeast Florida Regional Airport in St...
.