Japanese battleship Iwami was one of eight Russia
Russia
Russia or , officially known as both Russia and the Russian Federation , is a country in northern Eurasia. It is a federal semi-presidential republic, comprising 83 federal subjects...
n pre-dreadnought
Pre-dreadnought
Pre-dreadnought battleship is the general term for all of the types of sea-going battleships built between the mid-1890s and 1905. Pre-dreadnoughts replaced the ironclad warships of the 1870s and 1880s...
battleship
Battleship
A battleship is a large armored warship with a main battery consisting of heavy caliber guns. Battleships were larger, better armed and armored than cruisers and destroyers. As the largest armed ships in a fleet, battleships were used to attain command of the sea and represented the apex of a...
s captured by the Imperial Japanese Navy
Imperial Japanese Navy
The Imperial Japanese Navy was the navy of the Empire of Japan from 1869 until 1947, when it was dissolved following Japan's constitutional renunciation of the use of force as a means of settling international disputes...
during the Russo-Japanese War
Russo-Japanese War
The Russo-Japanese War was "the first great war of the 20th century." It grew out of rival imperial ambitions of the Russian Empire and Japanese Empire over Manchuria and Korea...
of 1904–1905. It was built as the Russian battleship Oryol , and was commissioned into the Imperial Russian Navy
Imperial Russian Navy
The Imperial Russian Navy refers to the Tsarist fleets prior to the February Revolution.-First Romanovs:Under Tsar Mikhail Feodorovich, construction of the first three-masted ship, actually built within Russia, was completed in 1636. It was built in Balakhna by Danish shipbuilders from Holstein...
's Baltic Fleet
Baltic Fleet
The Twice Red Banner Baltic Fleet - is the Russian Navy's presence in the Baltic Sea. In previous historical periods, it has been part of the navy of Imperial Russia and later the Soviet Union. The Fleet gained the 'Twice Red Banner' appellation during the Soviet period, indicating two awards of...
. Some naval architects regard the Borodino-class as being among the worst battleships ever built (Preston 2002). The design was based on the French
France
The French Republic , The French Republic , The French Republic , (commonly known as France , is a unitary semi-presidential republic in Western Europe with several overseas territories and islands located on other continents and in the Indian, Pacific, and Atlantic oceans. Metropolitan France...
built battleship , which was constructed with a tumblehome
Tumblehome
In ship designing, the tumblehome is the narrowing of a ship's hull with greater distance above the water-line. Expressed more technically, it is present when the beam at the uppermost deck is less than the maximum beam of the vessel....
hull. The tumblehome design resulted in a high centre of gravity, which was magnified
Magnified
-Personnel:*Ken Andrews – vocals, guitar, bass*Greg Edwards – bass guitar, guitar, drums*John Dargahi - drums...
by overloading. 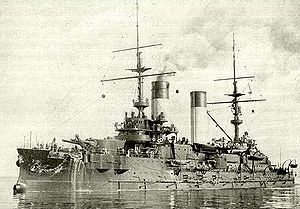 The Oryol was the only modern Russian battleship to survive the Battle of Tsushima
Battle of Tsushima
The Battle of Tsushima , commonly known as the “Sea of Japan Naval Battle” in Japan and the “Battle of Tsushima Strait”, was the major naval battle fought between Russia and Japan during the Russo-Japanese War...
, becoming part of naval history
Naval history
Naval history is the area of military history concerning war at sea and the subject is also a sub-discipline of the broad field of maritime history....
's last surrender
Surrender (military)
Surrender is when soldiers, nations or other combatants stop fighting and eventually become prisoners of war, either as individuals or when ordered to by their officers. A white flag is a common symbol of surrender, as is the gesture of raising one's hands empty and open above one's head.When the...
of a battle fleet on the high seas, when on the morning after the battle, Admiral
Admiral
Admiral is the rank, or part of the name of the ranks, of the highest naval officers. It is usually considered a full admiral and above vice admiral and below admiral of the fleet . It is usually abbreviated to "Adm" or "ADM"...
Nikolai Nebogatov
Nikolai Nebogatov
Nikolai Ivanovich Nebogatov was a Rear-Admiral in the Imperial Russian Navy, noted for his role in the final stages of the Russo-Japanese War of 1904-1905.-Biography:...
surrendered her and the remains of the Russian Battle Fleet to Admiral Togo. The ships captain Nikolay Yung
Nikolay Yung
Nikolay Viktorovich Yung was a career officer in the Imperial Russian Navy, noted for his participation in the Battle of Tsushima in the Russo-Japanese War as captain of the battleship -Biography:...
was seriously wounded and died on 29 May.

She was substantially rebuilt after her capture by the Japanese, reducing her top weight and removing the smaller guns, and commissioned into the Imperial Japanese Navy as the battleship Iwami, taking her name from an ancient Japanese province, of Iwami
Iwami Province
was an old province of Japan in the area that is today the western part of Shimane Prefecture. It was sometimes called . Iwami bordered Aki, Bingo, Izumo, Nagato, and Suō provinces.In the Heian era the capital was at modern-day Hamada....
now part of Shimane prefecture
Shimane Prefecture
is a prefecture of Japan located in the Chūgoku region on Honshū island. The capital is Matsue. It is the second least populous prefecture in Japan, after its eastern neighbor Tottori. The prefecture has an area elongated from east to west facing the Chūgoku Mountain Range on the south side and to...
. The name Iwami was chosen as this province was geographically the closest to the location of the Battle of Tsushima.

On 28 August 1912, the Iwami was re-classified as a 1st class Coastal Defense Vessel.

Under the terms of the Washington Naval Agreement, Japan agreed to scrap the Iwami. She was decommissioned on 9 May 1923, and expended as a target, sunk by aircraft launched from Jogashima
Jōgashima
is a Japanese island of the municipality of Miura, Kanagawa Prefecture, Japan, off the southernmost and western tip of Miura Peninsula, facing Sagami Bay.It is home to the Jōgashima Lighthouse, the fourth oldest western style lighthouse to be built in Japan....
island (near Yokosuka) on 10 July 1924.
The source of this article is wikipedia, the free encyclopedia.  The text of this article is licensed under the GFDL.