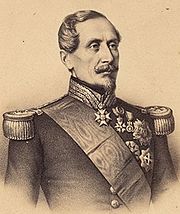 Armand-Jacques Leroy de Saint-Arnaud (August 20, 1801 – September 29, 1854) was a French
France
The French Republic , The French Republic , The French Republic , (commonly known as France , is a unitary semi-presidential republic in Western Europe with several overseas territories and islands located on other continents and in the Indian, Pacific, and Atlantic oceans. Metropolitan France...
soldier and Marshal of France
Marshal of France
The Marshal of France is a military distinction in contemporary France, not a military rank. It is granted to generals for exceptional achievements...
during the 19th century. He served as French Minister of War until the Crimean War
Crimean War
The Crimean War was a conflict fought between the Russian Empire and an alliance of the French Empire, the British Empire, the Ottoman Empire, and the Kingdom of Sardinia. The war was part of a long-running contest between the major European powers for influence over territories of the declining...
when he became Commander-in-chief of the army of the East.

Born in Paris, he entered the army in 1817, but after ten years of garrison service, he still held only the lowest commissioned grade. He then resigned, led a life of adventure in several lands and returned to the army at the age of thirty as a sub-lieutenant. He took part in the suppression of the Vendée émeute, and was for a time on the staff of General (Marshal) Bugeaud
Thomas Robert Bugeaud de la Piconnerie
Thomas Robert Bugeaud, marquis de la Piconnerie, duc d'Isly was a Marshal of France and Governor-General of Algeria.-Early life:...
. However, his debts and the scandals of his private life compelled him to go to Algeria
Algeria
Algeria , officially the People's Democratic Republic of Algeria , also formally referred to as the Democratic and Popular Republic of Algeria, is a country in the Maghreb region of Northwest Africa with Algiers as its capital.In terms of land area, it is the largest country in Africa and the Arab...
as a captain in the French Foreign Legion
French Foreign Legion
The French Foreign Legion is a unique military service wing of the French Army established in 1831. The foreign legion was exclusively created for foreign nationals willing to serve in the French Armed Forces...
. There he distinguished himself on numerous occasions, and after twelve years had risen to the rank of maréchal de camp (major general).

In 1848 Saint Arnaud commanded a brigade during the revolution in Paris. On his return to Africa
Africa
Africa is the world's second largest and second most populous continent, after Asia. At about 30.2 million km² including adjacent islands, it covers 6% of the Earth's total surface area and 20.4% of the total land area...
, possibly because Louis Napoleon considered him a suitable military head of a potential coup d'état
Coup d'état
A coup d'état state, literally: strike/blow of state)—also known as a coup, putsch, and overthrow—is the sudden, extrajudicial deposition of a government, usually by a small group of the existing state establishment—typically the military—to replace the deposed government with another body; either...
, an expedition took place into Little Kabylia, in which Saint Arnaud showed his prowess as a commander-in-chief and provided his superiors with the pretext for bringing him home as a general of division (July 1851).

He succeeded Marshal Magnan
Bernard Pierre Magnan
Bernard Pierre Magnan was a Marshal of France.Magnan started his career as an enlisted soldier of the 66th Line in 1809. Promoted to sergeant in 1810, the next year he entered the officers ranks and was successively promoted 2nd lieuteneant, 1st lieutenant and captain. From 1810 to 1813 Magnan...
as minister of war and superintended the military operations of the coup d'état
French coup of 1851
The French coup d'état on 2 December 1851, staged by Prince Louis-Napoléon Bonaparte , ended in the successful dissolution of the French National Assembly, as well as the subsequent re-establishment of the French Empire the next year...
of December 2, 1851, which placed Louis Napoleon on the throne as Napoleon III. A year later he became a Marshal of France
Marshal of France
The Marshal of France is a military distinction in contemporary France, not a military rank. It is granted to generals for exceptional achievements...
and a senator, remaining at the head of the war office till 1854, when he set out to command the French forces in the Crimean War
Crimean War
The Crimean War was a conflict fought between the Russian Empire and an alliance of the French Empire, the British Empire, the Ottoman Empire, and the Kingdom of Sardinia. The war was part of a long-running contest between the major European powers for influence over territories of the declining...
, alongside his British
United Kingdom
The United Kingdom of Great Britain and Northern IrelandIn the United Kingdom and Dependencies, other languages have been officially recognised as legitimate autochthonous languages under the European Charter for Regional or Minority Languages...
colleague Lord Raglan. He died on board ship, shortly after commanding at the Battle of the Alma
Battle of Alma
The Battle of the Alma , which is usually considered the first battle of the Crimean War , took place just south of the River Alma in the Crimea. An Anglo-French force under General St...
(20 September 1854). His body, returned to France, lies buried in Les Invalides
Les Invalides
Les Invalides , officially known as L'Hôtel national des Invalides , is a complex of buildings in the 7th arrondissement of Paris, France, containing museums and monuments, all relating to the military history of France, as well as a hospital and a retirement home for war veterans, the building's...
.

The town of St Arnaud, Victoria, Australia was named after Jaques and has a commemorative statue of him in the towns botanical gardens on Napier Street. Another town located in Algeria, was called Saint Arnaud under French rule
French rule in Algeria
French Algeria lasted from 1830 to 1962, under a variety of governmental systems. From 1848 until independence, the whole Mediterranean region of Algeria was administered as an integral part of France, much like Corsica and Réunion are to this day. The vast arid interior of Algeria, like the rest...
, currently, its name is El Eulma
El Eulma
El Eulma is a city in Algeria, located some 210 miles east of the capital Algiers. It is the second-largest city in Sétif Province with a population of 105,130 . In the French colonial period the city was known as Saint Arnaud after Marshal Jacques Leroy de Saint Arnaud.-External links:...
. The Saint Arnaud Range
Saint Arnaud Range
The Saint Arnaud Range is a mountain range in the central north of New Zealand's South Island. It lies between Lake Rotoiti and the upper reaches of the Wairau River, and marks the eastern boundary of Nelson Lakes National Park....
and the nearby locality of Saint Arnaud
Saint Arnaud, New Zealand
Saint Arnaud is a small alpine village located in the north of New Zealand's South Island, west of the mountains of the Saint Arnaud Range and 90 kilometres southwest of Nelson near the historic Tophouse Settlement...
in New Zealand
New Zealand
New Zealand is an island country in the south-western Pacific Ocean comprising two main landmasses and numerous smaller islands. The country is situated some east of Australia across the Tasman Sea, and roughly south of the Pacific island nations of New Caledonia, Fiji, and Tonga...
both derive their name from him.