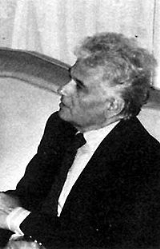 Overview
Jacques Derrida was a French philosopher, born in French Algeria
French Algeria
French Algeria lasted from 1830 to 1962, under a variety of governmental systems. From 1848 until independence, the whole Mediterranean region of Algeria was administered as an integral part of France, much like Corsica and Réunion are to this day. The vast arid interior of Algeria, like the rest...
. He developed the critical theory
Critical theory
Critical theory is an examination and critique of society and culture, drawing from knowledge across the social sciences and humanities. The term has two different meanings with different origins and histories: one originating in sociology and the other in literary criticism...
known as deconstruction
Deconstruction
Deconstruction is a term introduced by French philosopher Jacques Derrida in his 1967 book Of Grammatology. Although he carefully avoided defining the term directly, he sought to apply Martin Heidegger's concept of Destruktion or Abbau, to textual reading...
and his work has been labeled as post-structuralism
Post-structuralism
Post-structuralism is a label formulated by American academics to denote the heterogeneous works of a series of French intellectuals who came to international prominence in the 1960s and '70s...
and associated with postmodern philosophy
Postmodern philosophy
Postmodern philosophy is a philosophical direction which is critical of the foundational assumptions and structures of philosophy. Beginning as a critique of Continental philosophy, it was heavily influenced by phenomenology, structuralism and existentialism, including writings of Georg Wilhelm...
. His output of more than 40 published books, together with essays and public speaking, has had a significant impact upon the humanities
Humanities
The humanities are academic disciplines that study the human condition, using methods that are primarily analytical, critical, or speculative, as distinguished from the mainly empirical approaches of the natural sciences....
, particularly on literary theory
Literary theory
Literary theory in a strict sense is the systematic study of the nature of literature and of the methods for analyzing literature. However, literary scholarship since the 19th century often includes—in addition to, or even instead of literary theory in the strict sense—considerations of...
and continental philosophy
Continental philosophy
Continental philosophy, in contemporary usage, refers to a set of traditions of 19th and 20th century philosophy from mainland Europe. This sense of the term originated among English-speaking philosophers in the second half of the 20th century, who used it to refer to a range of thinkers and...
. Perhaps Derrida's most quoted and famous assertion, which appears in an essay on Rousseau
Jean-Jacques Rousseau
Jean-Jacques Rousseau was a Genevan philosopher, writer, and composer of 18th-century Romanticism. His political philosophy influenced the French Revolution as well as the overall development of modern political, sociological and educational thought.His novel Émile: or, On Education is a treatise...
in his book Of Grammatology
Of Grammatology
De la grammatologie is a book by French philosopher Jacques Derrida, first published in 1967 by Les Éditions de Minuit. Of Grammatology, the English translation by Gayatri Chakravorty Spivak, was first published in 1976 by Johns Hopkins University Press...
(1967), is the statement that "there is nothing outside the text" (il n'y a pas de hors-texte), meaning that there is nothing outside context.

The end of man (as a factual anthropological limit) is announced to thought from the vantage of the end of man (as a determined opening or the infinity of a telos). Man is that which is in relation to his end, in the fundamentally equivocal sense of the word. Since always.

Translation: There is nothing outside the text (alternatively and possibly more accurately this can be translated as 'there is no outside to the text')
More
x