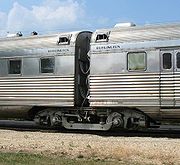 Jacobs bogies are a type of rail
Rail transport
Rail transport is a means of conveyance of passengers and goods by way of wheeled vehicles running on rail tracks. In contrast to road transport, where vehicles merely run on a prepared surface, rail vehicles are also directionally guided by the tracks they run on...
vehicle bogie
Bogie
A bogie is a wheeled wagon or trolley. In mechanics terms, a bogie is a chassis or framework carrying wheels, attached to a vehicle. It can be fixed in place, as on a cargo truck, mounted on a swivel, as on a railway carriage/car or locomotive, or sprung as in the suspension of a caterpillar...
commonly found on articulated railcar
Railcar
A railcar, in British English and Australian English, is a self-propelled railway vehicle designed to transport passengers. The term "railcar" is usually used in reference to a train consisting of a single coach , with a driver's cab at one or both ends. Some railways, e.g., the Great Western...
s and tram
Tram
A tram is a passenger rail vehicle which runs on tracks along public urban streets and also sometimes on separate rights of way. It may also run between cities and/or towns , and/or partially grade separated even in the cities...
way vehicles.

Instead of being underneath a piece of rolling stock, Jacobs bogies are placed between two carbody sections. The cars on either side spread their weight on one half of the Jacobs bogie.

Vehicles featuring Jacobs bogies include the TGV
TGV
The TGV is France's high-speed rail service, currently operated by SNCF Voyages, the long-distance rail branch of SNCF, the French national rail operator....
and Eurostar
Eurostar
Eurostar is a high-speed railway service connecting London with Paris and Brussels. All its trains traverse the Channel Tunnel between England and France, owned and operated separately by Eurotunnel....
trains, the Spanish Talgo series since 1955, the Talent
Talent (train)
The Talent is a multiple unit railcar manufactured by Bombardier that was developed by Waggonfabrik Talbot in Aachen shortly before the company was acquired by Bombardier in 1995...
series of multiple units, the LINT41
Alstom LHB Coradia LINT
The Alstom Coradia LINT is a diesel single-unit or two-unit articulated passenger railcar manufactured by Alstom. The acronym LINT is short for the German "Leichter Innovativer Nahverkehrstriebwagen"...
, the Class 423
DBAG Class 423
The Class 423 EMU is a light-weight articulated electric railcar for S-Bahn commuter networks in Germany. The train has similar dimensions to its predecessor, the Class 420 EMU, but is significantly lighter and has one large passenger compartment, while that of the 420 is divided into three parts...
S-Bahn
S-Bahn
S-Bahn refers to an often combined city center and suburban railway system metro in Austria, Germany, Switzerland and Denmark...
vehicles, the Canadian CN Turbo-Trains, several FLIRT trains, and the Škoda ForCity
Škoda 15 T
Škoda 15T is a 100% low floor tram developed by Škoda for the Transport Company of Prague in the years 2005-2008. The order and subsequent construction was influenced by experiences with operation of the Škoda 14 T in the Prague tram network...
tram. A disadvantage of vehicles using Jacobs bogies is they are semi-permanently coupled and can only be separated in the workshop
Workshop
A workshop is a room or building which provides both the area and tools that may be required for the manufacture or repair of manufactured goods...
.

In the United States
United States
The United States of America is a federal constitutional republic comprising fifty states and a federal district...
, such configurations have been used throughout the twentieth century with some success on early streamlined
Streamliner
A streamliner is a vehicle incorporating streamlining in a shape providing reduced air resistance. The term is applied to high-speed railway trainsets of the 1930s to 1950s, and to their successor "bullet trains". Less commonly, the term is applied to fully faired recumbent bicycles...
passenger trainsets, such as the Chicago, Burlington and Quincy Railroad
Chicago, Burlington and Quincy Railroad
The Chicago, Burlington and Quincy Railroad was a railroad that operated in the Midwestern United States. Commonly referred to as the Burlington or as the Q, the Burlington Route served a large area, including extensive trackage in the states of Colorado, Illinois, Iowa, Kentucky, Missouri,...
's Pioneer Zephyr
Pioneer Zephyr
The Pioneer Zephyr is a diesel-powered railroad train formed of railroad cars permanently articulated together with Jacobs bogies, built by the Budd Company in 1934 for the Chicago, Burlington and Quincy Railroad , commonly known as the Burlington...
and Union Pacific Railroad
Union Pacific Railroad
The Union Pacific Railroad , headquartered in Omaha, Nebraska, is the largest railroad network in the United States. James R. Young is president, CEO and Chairman....
's M-10000
M-10000
The Union Pacific Railroad's M-10000, delivered to the railroad on February 12, 1934, at a cost of $230,997, was the first internal combustion engine, lightweight streamlined express passenger train in the United States. The carbodies and interior fittings were built by Pullman-Standard...
. Dallas Area Rapid Transit rail
DART Light Rail
DART Light Rail is a light rail system in Dallas, Texas and its suburbs owned by the Dallas Area Rapid Transit. The system comprises between its three lines — the , the and the . Its 72 miles of track make it the largest light rail system in the United States. It has a daily ridership of...
trains originally used a center bogie in a two unit car but are being modified to add a lower center section for handicapped level entry making a 3 unit car with two Jacobs bogies.

In Australia
Australia
Australia , officially the Commonwealth of Australia, is a country in the Southern Hemisphere comprising the mainland of the Australian continent, the island of Tasmania, and numerous smaller islands in the Indian and Pacific Oceans. It is the world's sixth-largest country by total area...
, Jacobs bogies were first used on the B class Melbourne tram
B class Melbourne tram
The B class are a two-section, three-bogie articulated tram that operates in Melbourne, Victoria. Following the introduction of two B1-class trams in 1984 and 1985, a total of 130 B2-class trams were ordered by the Victorian Government and built by Comeng in Dandenong, Victoria...
in 1987 on two tram-converted former suburban railways.

The Jacobs bogie can be found in streetcars, like Tatra K2
Tatra K2
The Tatra K2 was the first production articulated tramcar built by ČKD Tatra between 1966 and 1983, following the failure of the experimental K1 which never entered production. It was noted that the main problem with the K1 was with the new electrical equipment, and therefore the same electrical...
and Oslo's SL79
SL79
SL79 is a class of 40 articulated trams operated by the Oslo Tramway of Norway. The trams were a variation of the Duewag trams that had been developed by the German manufacturer since the 1950s. The six-axle vehicles are unidirectional with four doors on the right side. The trams can seat 77...
. The only 100% low floor tram with pivoting bogies Škoda ForCity
Škoda 15 T
Škoda 15T is a 100% low floor tram developed by Škoda for the Transport Company of Prague in the years 2005-2008. The order and subsequent construction was influenced by experiences with operation of the Škoda 14 T in the Prague tram network...
also uses Jacobs bogies.

On this remarkable crossover between the tram (streetcar) and the high-speed train
High-speed rail
High-speed rail is a type of passenger rail transport that operates significantly faster than the normal speed of rail traffic. Specific definitions by the European Union include for upgraded track and or faster for new track, whilst in the United States, the U.S...
, Jacobs bogies occurred on the latest equipment of any significance, the two Electroliner
Electroliner
The Electroliners were a pair of electric passenger train sets operated by the Chicago North Shore and Milwaukee Railroad, which ran between Chicago, Illinois, and Milwaukee, Wisconsin. These streamlined electric multiple unit interurban trains were built by St. Louis Car Company in 1941. Each...
trains (1941–76). They were suited both for streets with tight curves, and running through the countryside at approximately 140 km/h. They served the Chicago–Milwaukee line and later the Philadelphia area.