Jacket lapels are the folded flaps of cloth on the front of a jacket
Jacket
A jacket is a hip- or waist-length garment for the upper body. A jacket typically has sleeves, and fastens in the front. A jacket is generally lighter, tighter-fitting, and less insulating than a coat, which is outerwear...
or coat
Coat (clothing)
A coat is a long garment worn by both men and women, for warmth or fashion. Coats typically have long sleeves and are open down the front, closing by means of buttons, zippers, hook-and-loop fasteners, toggles, a belt, or a combination of some of these...
, and are most commonly found on formal clothing and suit jackets. Usually they are formed by folding over the front edges of the jacket or coat and sewing them to the collar, an extra piece of fabric around the back of the neck, as shown in the image.

There are three basic forms of lapels: notched, peaked and shawl. Notched lapels, the most common, are usually seen on business suits. Peaked lapels are more formal
Formal wear
Formal wear and formal dress are the general terms for clothing suitable for formal social events, such as a wedding, formal garden party or dinner, débutante cotillion, dance, or race...
, and nearly always used on double breasted jackets or coats. Shawl lapels are usually carried by dinner jackets.

The notched lapel (American English), step lapel or step collar (British English) is sewn to the collar at an angle, creating a step effect. This is the standard on single breasted suits, and is used on nearly all suit
Suit (clothing)
In clothing, a suit is a set of garments made from the same cloth, consisting of at least a jacket and trousers. Lounge suits are the most common style of Western suit, originating in the United Kingdom as country wear...
jackets, blazer
Blazer
A blazer is a type of jacket. The term blazer occasionally is synonymous with boating jacket and sports jacket, two different garments. A blazer resembles a suit coat cut more casually — sometimes with flap-less patch pockets and metal buttons. A blazer's cloth is usually durable , because it is an...
s, and sports jackets. The size of the notch can vary, and a small notch is called fishmouth.

The peaked lapel (American English), double breasted style lapel or pointed lapel (British English), is the most formal, featuring on double-breasted
Double-breasted
In clothing, the term double-breasted refers to a coat or jacket with wide, overlapping front flaps and two parallel columns of buttons or snaps; by contrast, a single-breasted coat has a narrow overlap and only one column of buttons. In most modern double-breasted coats, one column of buttons is...
jackets, and is now always worn with all formal coats such as a tailcoat
Tailcoat
A tailcoat is a coat with the front of the skirt cut away, so as to leave only the rear section of the skirt, known as the tails. The historical reason coats were cut this way was to make it easier for the wearer to ride a horse, but over the years tailcoats of varying types have evolved into forms...
or morning coat, and also commonly with a dinner jacket (both single and double breasted). In the late 1920s and 1930s, the single breasted peaked lapel jacket was considered a very stylish design. The feature was carried into day clothing by the increasing popularity of the peaked dinner jacket. This has gone in and out of vogue periodically, made popular once again during the 1970s by designers such as Armani, and is currently a trending style in the 2010s. The ability to properly cut peak lapels on a single-breasted suit is one of the most challenging tailoring tasks, even for very experienced tailors.

The shawl lapel, roll collar, or shawl collar is a continuous curve. Originally seen on the Victorian
Victorian fashion
Victorian fashion comprises the various fashions and trends in British culture that emerged and grew in province throughout the Victorian era and the reign of Queen Victoria, a period which would last from June 1837 to January 1901. Covering nearly two thirds of the 19th century, the 63 year reign...
smoking jacket
Smoking jacket
A smoking jacket is an overgarment designed to be worn while smoking tobacco, usually in the form of pipes and cigars, or for domestic leisure.-Design:The classic smoking jacket is a mid thigh-length jacket made from velvet or silk, or both...
, it is now most common on the dinner jacket (tuxedo). This similarly began as informal eveningwear, and was then made in both more and less formal versions, depending on the situation in which it was to be used.

There are also other variations, such as the Nehru jacket
Nehru jacket
The Nehru jacket is a hip-length tailored coat for men or women, created in India in the 1940s. The jacket essentially blends the collar of the achkan, historically the royal court dress of Indian nobles, with the Western suit jacket...
, with no lapel.

Lapels have a buttonhole
Buttonhole
Buttonholes are holes in fabric which allow buttons to pass through, securing one piece of the fabric to another. The raw edges of a buttonhole are usually finished with stitching. This may be done either by hand or by a sewing machine. Some forms of button, such as a Mandarin button, use a loop...
on the left, which is intended to hold a boutonnière
Boutonniere
A boutonnière is a floral decoration worn by men, typically a single flower or bud. The word comes from the French word for buttonhole, which is the British term....
, a decorative flower. These are now only commonly seen at more formal events. To hold the flower properly, a loop is fixed to the back of the lapel. For symmetry, double breasted suits often have a button hole on each lapel.

A lapel pin
Lapel pin
A lapel pin is a small pin often worn on the lapel of a dress jacket. Lapel pins can be purely ornamental or can indicate the wearer's affiliation with an organization or cause; for example, American Flag lapel pins became very popular in the United States, especially among politicians, following...
is also sometimes worn, and in punk fashion
Punk fashion
Punk fashion is the clothing, hairstyles, cosmetics, jewelry, and body modifications of the punk subculture. Punk fashion varies widely, ranging from Vivienne Westwood designs to styles modeled on bands like The Exploited. The distinct social dress of other subcultures and art movements, including...
, the lapels of leather jacket
Leather jacket
A leather jacket is a type of clothing—a jacket-length coat—usually worn on top of other apparel, and made from the tanned hide of various animals. The leather material is typically dyed black, or various shades of brown, but a wide range of colors is possible...
s are often adorned with various button
Button
In modern clothing and fashion design, a button is a small fastener, most commonly made of plastic, but also frequently of seashell, which secures two pieces of fabric together. In archaeology, a button can be a significant artifact. In the applied arts and in craft, a button can be an example of...
s and pin
Pin
A pin is a device used for fastening objects or material together.Pin may also refer to:* Award pin, a small piece of metal or plastic with a pin attached given as an award for some achievement...
s, usually sporting typical punk images and popular punk band logos.

The width of the lapel is a widely varying aspect of suits, and has changed widely over the years. Some designers maintain however that most stylish lapel width does not change, and that the lapel "should extend to just a fraction less than the halfway mark between the collar and shoulder line." The 1930s and 1970s featured an exceptionally wide lapel width, whereas during the late 1950s and most of the 1960s suits with very narrow lapels — often only about an inch wide — were in fashion. The 1980s saw mid-size lapels with a low gorge (the point where the jacket lapel and collar meet). In the 2000s, trends were towards a narrower lapel and higher gorge. 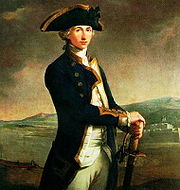 The usual style of lapel (the notched lapel) originated in older types of jacket or coat that buttoned to the neck, by unbuttoning and turning back the upper part of the closure at an angle indoors or in hot weather, and then removing the upper buttons. The upper points are derived from the end corners of the collar. This can be duplicated by similarly turning back the closure in a modern button-to-the-neck garment such as an outdoor coat or a boilersuit. Sometimes when caught outside in bad weather in a lapelled jacket and nothing over it, its wearer may unfold the lapels and hold them that way to temporarily reproduce the ancestral to-the-neck closure.

As tailcoat
Tailcoat
A tailcoat is a coat with the front of the skirt cut away, so as to leave only the rear section of the skirt, known as the tails. The historical reason coats were cut this way was to make it easier for the wearer to ride a horse, but over the years tailcoats of varying types have evolved into forms...
s evolved rapidly among the wealthy during the Regency period, various styles of closure saw popularity, from fastenings at the top, the middle, or even hanging open. The turn-down collar popular on earlier garments like the frock
Frock
Frock has been used since Middle English as the name for an article of clothing for men and women .- History of the frock :...
was succeeded by long lapels folded down to below the waist (fashionably tightly nipped in). Invariably, there were long rows of buttons down the front, most of which did not fasten; in fact even into the late Victorian era
Victorian era
The Victorian era of British history was the period of Queen Victoria's reign from 20 June 1837 until her death on 22 January 1901. It was a long period of peace, prosperity, refined sensibilities and national self-confidence...
, all frock coats had a long row of button holes on the lapel, long since obsolete. As buttoning styles changed, the loosely folded front of the coat correspondingly shifted shape, and the V then formed by the meeting of the fold and the collar continues now in the traditional shape of notched and peaked lapels, both of which originate from that period.

Once double breasted frock coats were established, lapels were sharply creased and their form was more static, varying only in details such as height, since they were buttoned nearly to the neck by the Edwardians, then lengthened to the classic three-button shape, the two-button jacket being a further American innovation. The other significant change over that period was the use of the revers in the construction of the lapel, as the Victorians used elaborate three-part patterns to cut a fold of cloth from the lining into the front of the lapel, a universal consideration of frock coats and dress coats of the period, but abandoned in favour of our current single-piece lapels at the same time as the switch to morning coats and lounge suits. Modern lapels are largely identical in form to their 1930s counterparts.

Some historians of dress such as Bernard Rudofsky have ridiculed the evolution of jacket lapels into "vastly unnecessary flaps" and "decorative rudiments," while others have celebrated the transformation of lapels into "fetishes" as part and parcel of fashion as expression.
The source of this article is wikipedia, the free encyclopedia.  The text of this article is licensed under the GFDL.