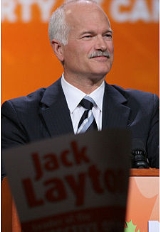 Overview
John Gilbert "Jack" Layton, PC
Queen's Privy Council for Canada
The Queen's Privy Council for Canada ), sometimes called Her Majesty's Privy Council for Canada or simply the Privy Council, is the full group of personal consultants to the monarch of Canada on state and constitutional affairs, though responsible government requires the sovereign or her viceroy,...
(July 18, 1950 – August 22, 2011) was a Canadian social democratic
Social democracy
Social democracy is a political ideology of the center-left on the political spectrum. Social democracy is officially a form of evolutionary reformist socialism. It supports class collaboration as the course to achieve socialism...
politician and the Leader of the Official Opposition. He was the leader of the New Democratic Party
New Democratic Party
The New Democratic Party , commonly referred to as the NDP, is a federal social-democratic political party in Canada. The interim leader of the NDP is Nycole Turmel who was appointed to the position due to the illness of Jack Layton, who died on August 22, 2011. The provincial wings of the NDP in...
from 2003 to 2011, and previously sat on Toronto City Council
Toronto City Council
The Toronto City Council is the governing body of the city of Toronto, Ontario, Canada.Members represent wards throughout the city, and are known as councillors....
, serving at times during that period as acting mayor and deputy mayor of Toronto
Toronto
Toronto is the provincial capital of Ontario and the largest city in Canada. It is located in Southern Ontario on the northwestern shore of Lake Ontario. A relatively modern city, Toronto's history dates back to the late-18th century, when its land was first purchased by the British monarchy from...
. He was the Member of Parliament for the constituency of Toronto—Danforth
Toronto—Danforth
Toronto—Danforth is a federal electoral district in Ontario, Canada, that has been represented in the Canadian House of Commons since 1979. It lies to the east of Downtown Toronto....
from 2004
Canadian federal election, 2004
The Canadian federal election, 2004 , was held on June 28, 2004 to elect members of the Canadian House of Commons of the 38th Parliament of Canada. The Liberal government of Prime Minister Paul Martin lost its majority, but was able to form a minority government after the elections...
until his death.

How do you feel about Nuclear Energy?
More

I think if you
More
x