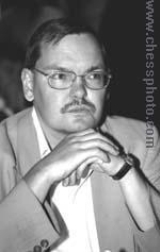 Encyclopedia
Jaan Ehlvest
Jaan Ehlvest (born 14 October 1962 is a chess
Chess
Chess is a two-player board game played on a chessboard, a square-checkered board with 64 squares arranged in an eight-by-eight grid. It is one of the world's most popular games, played by millions of people worldwide at home, in clubs, online, by correspondence, and in tournaments.Each player...
player, who was awarded the title of Grandmaster
International Grandmaster
The title Grandmaster is awarded to strong chess players by the world chess organization FIDE. Apart from World Champion, Grandmaster is the highest title a chess player can attain....
by FIDE in 1987 and was named Estonian sportsman of the year in 1987 and 1989. Since 2006, he has represented the United States of America.

Ehlvest studied psychology at Tartu
Tartu
Tartu is the second largest city of Estonia. In contrast to Estonia's political and financial capital Tallinn, Tartu is often considered the intellectual and cultural hub, especially since it is home to Estonia's oldest and most renowned university. Situated 186 km southeast of Tallinn, the...
State University. In 2004, Ehlvest published his autobiography, The Story of a Chess Player. In 2006, unsatisfied with the lack of support from the Estonian Chess Federation, Ehlvest decided to move to the United States; since then, he has been a member of the USCF
United States Chess Federation
The United States Chess Federation is a non-profit organization, the governing chess organization within the United States, and one of the federations of the FIDE. The USCF was founded in 1939 from the merger of two regional chess organizations, and grew gradually until 1972, when membership...
and competed internationally for the USA.

In March 2007, Ehlvest accepted an invitation to play an unusual eight-game match against the chess program Rybka
Rybka
Rybka is a computer chess engine designed by International Master Vasik Rajlich. , Rybka is one of the top-rated engines on chess engine rating lists and has won many computer chess tournaments...
, one of the strongest chess programs in existence. He was playing Black in all games, but was given pawn odds (Rybka was playing each game a pawn down; different white pawn was removed in each game). He lost the match by 2.5:5.5 (+1−4=3). In a following rematch, the pawn odds were removed, Ehlvest was given White in every game, twice the time on the clock, and significant computational handicaps were placed on the machine. Ehlvest lost decisively, 1.5:4.5.