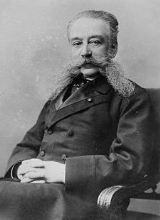 Encyclopedia
Ivan Logginovitch Goremykin (8 November 1839 24 December 1917) was a Russia
Russia
Russia or , officially known as both Russia and the Russian Federation , is a country in northern Eurasia. It is a federal semi-presidential republic, comprising 83 federal subjects...
n prime minister
Prime minister
A prime minister is the most senior minister of cabinet in the executive branch of government in a parliamentary system. In many systems, the prime minister selects and may dismiss other members of the cabinet, and allocates posts to members within the government. In most systems, the prime...
during World War I
World War I
World War I , which was predominantly called the World War or the Great War from its occurrence until 1939, and the First World War or World War I thereafter, was a major war centred in Europe that began on 28 July 1914 and lasted until 11 November 1918...
and politician with extremely conservative
Conservatism
Conservatism is a political and social philosophy that promotes the maintenance of traditional institutions and supports, at the most, minimal and gradual change in society. Some conservatives seek to preserve things as they are, emphasizing stability and continuity, while others oppose modernism...
political views.

After serving in the Ministry of Justice until 1891 he moved to the Ministry of the Interior, becoming Minister from 1895-1899. A self-described "man of the old school" who viewed the Tsar
Tsar
Tsar is a title used to designate certain European Slavic monarchs or supreme rulers. As a system of government in the Tsardom of Russia and Russian Empire, it is known as Tsarist autocracy, or Tsarism...
as the "anointed one, the rightful sovereign", Goremykin was a loyal supporter of Nicholas II
Nicholas II of Russia
Nicholas II was the last Emperor of Russia, Grand Prince of Finland, and titular King of Poland. His official short title was Nicholas II, Emperor and Autocrat of All the Russias and he is known as Saint Nicholas the Passion-Bearer by the Russian Orthodox Church.Nicholas II ruled from 1894 until...
as autocrat and accordingly pursued conservative policy. He was apparently well liked by the Empress Alexandra
Alexandra Fyodorovna of Hesse
Alix of Hesse and by Rhine later Alexandra Feodorovna Romanova , was Empress consort of Russia as spouse of Nicholas II, the last Emperor of the Russian Empire...
.

While heading the Interior Ministry he submitted a proposal to the Tsar advocating administrative reform and the expansion of the zemstvo
Zemstvo
Zemstvo was a form of local government that was instituted during the great liberal reforms performed in Imperial Russia by Alexander II of Russia. The idea of the zemstvo was elaborated by Nikolay Milyutin, and the first zemstvo laws were put into effect in 1864...
program and representation within the existing Zemstvos. Faced with opposition to the program, he left the position. He succeeded Sergei Witte
Sergei Witte
Count Sergei Yulyevich Witte , also known as Sergius Witte, was a highly influential policy-maker who presided over extensive industrialization within the Russian Empire. He served under the last two emperors of Russia...
as Chairman of the Council of Ministers (Prime Minister) in May, 1906. His unwaivering opposition to the political reform demanded by the First Duma left him unable to work with that body and he resigned in July 1906. He was replaced by his Minister of Interior, the younger and more forceful Peter Stolypin
Pyotr Stolypin
Pyotr Arkadyevich Stolypin served as the leader of the 3rd DUMA—from 1906 to 1911. His tenure was marked by efforts to repress revolutionary groups, as well as for the institution of noteworthy agrarian reforms. Stolypin hoped, through his reforms, to stem peasant unrest by creating a class of...
. 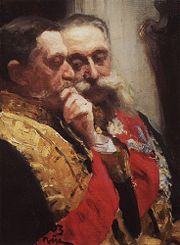 Called back to service by the Tsar, he again served as Chairman of the Council of Ministers (Prime Minister) from 1914 to 1916. The hostility expressed toward him by members of both the State Duma and the Council of Ministers greatly impaired the effectiveness of his government. When Nicholas II decided to take direct command of the army, Goremykin urged the Council to endorse the decision. When they refused, he told the Tsar that he (Goremykin) was "not fitted for my position" and asked to be replaced with "a man of more modern views". His wish for retirement was granted at the beginning of February 1916, when he was replaced by another conservative, Boris Stürmer
Boris Stürmer
Baron Boris Vladimirovich Stürmer was a Russian statesman. He served as Prime Minister, Foreign Minister, and Interior Minister of the Russian Empire for several months during 1916.- Biography :...
.

Goremykin's conservatism and inability to function in a semi-parliamentary system made him largely unsuitable for the position of head of government during the last years of Imperial Russia. Despised by parliamentarians and revolutionaries, and personally desiring only to retire, the ineffectiveness of his last government contributed to the instability and ultimate downfall of the Romanov dynasty.