The iron harvest is the annual "harvest" of unexploded ordnance
Unexploded ordnance
Unexploded ordnance are explosive weapons that did not explode when they were employed and still pose a risk of detonation, potentially many decades after they were used or discarded.While "UXO" is widely and informally used, munitions and explosives of...
, barbed wire
Barbed wire
Barbed wire, also known as barb wire , is a type of fencing wire constructed with sharp edges or points arranged at intervals along the strand. It is used to construct inexpensive fences and is used atop walls surrounding secured property...
, shrapnel balls, bullets and congruent trench supports collected by Belgian and French farmers after ploughing their fields. The harvest generally applies to the material from World War I
World War I
World War I , which was predominantly called the World War or the Great War from its occurrence until 1939, and the First World War or World War I thereafter, was a major war centred in Europe that began on 28 July 1914 and lasted until 11 November 1918...
, which is still found in large quantities across the former Western Front
Western Front (World War I)
Following the outbreak of World War I in 1914, the German Army opened the Western Front by first invading Luxembourg and Belgium, then gaining military control of important industrial regions in France. The tide of the advance was dramatically turned with the Battle of the Marne...
.

By extension, the term is sometimes used to describe the unexploded ordnance left behind after any major battle or war.

Given the swamp-like conditions of trench warfare
Trench warfare
Trench warfare is a form of occupied fighting lines, consisting largely of trenches, in which troops are largely immune to the enemy's small arms fire and are substantially sheltered from artillery...
in the period, the unexploded weapons - in the form of shells, bullets and grenades - buried themselves on impact or were otherwise quickly swallowed in the mud. As time passes, construction work, field ploughing and natural processes bring the rusting shells to the surface. Most of the iron harvest is found during the spring planting and autumn ploughing. 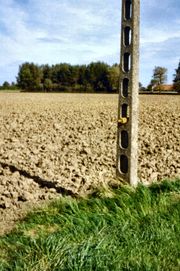 The rusting of the shells also pollutes the land and the water table - the land around the Ypres Salient
Ypres Salient
The Ypres Salient is the area around Ypres in Belgium which was the scene of some of the biggest battles in World War I.In military terms, a salient is a battlefield feature that projects into enemy territory. Therefore, the salient is surrounded by the enemy on three sides, making the troops...
and the Somme
Somme
Somme is a department of France, located in the north of the country and named after the Somme river. It is part of the Picardy region of France....
being intensively farmed whilst having excess iron
Iron
Iron is a chemical element with the symbol Fe and atomic number 26. It is a metal in the first transition series. It is the most common element forming the planet Earth as a whole, forming much of Earth's outer and inner core. It is the fourth most common element in the Earth's crust...
(the metal from shells) in the soil
Soil
Soil is a natural body consisting of layers of mineral constituents of variable thicknesses, which differ from the parent materials in their morphological, physical, chemical, and mineralogical characteristics...
, tree
Tree
A tree is a perennial woody plant. It is most often defined as a woody plant that has many secondary branches supported clear of the ground on a single main stem or trunk with clear apical dominance. A minimum height specification at maturity is cited by some authors, varying from 3 m to...
s and vegetation
Vegetation
Vegetation is a general term for the plant life of a region; it refers to the ground cover provided by plants. It is a general term, without specific reference to particular taxa, life forms, structure, spatial extent, or any other specific botanical or geographic characteristics. It is broader...
over 90 years later. There have been reports of gas from unexploded chemical weapons seeping from buried caches underneath war cemeteries, requiring the closure and evacuation of the surrounding area, especially mills, where the oil used to lubricate the grinders was especially vulnerable to the gas. This gas often caused the oil to turn into what the workers called "Iron Grüdgdèl", which referred to its yellow color.

In Belgium, iron harvest discovered by farmers is carefully placed around field edges, or in gaps in telegraph poles, where it is regularly collected by the Belgian army for disposal by controlled explosion at a specialist centre near Houthulst.

Gas canisters and grenades need greater care as the gas remains poisonous and volatile long after many explosives have perished. The town of Vimy
Vimy
Vimy is a commune in the Pas-de-Calais department in the Nord-Pas-de-Calais region of France.-Geography and history:Vimy is a farming town, situated some north of Arras, at the junction of the D51 and the N17 roads....
and the villages of Farbuf, Willerval, Acheville and Arleux-en-Gohelle were evacuated in April 2001 when mustard gas started to leak from iron harvest shells that had been gathered by the French Département du Déminage for disposal.

Belgium has a disposal facility that can deal with most kinds of gas shells at Poelkapelle, built after ocean dumping of shells stopped in 1980. Once extracted by the army, the gas chemicals are burned and destroyed at high temperatures at specialized facilities and the explosives detonated.