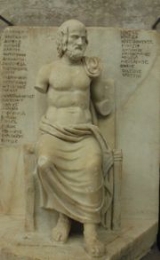 Encyclopedia
Ionis an ancient Greek play by Euripides
Euripides
Euripides was one of the three great tragedians of classical Athens, the other two being Aeschylus and Sophocles. Some ancient scholars attributed ninety-five plays to him but according to the Suda it was ninety-two at most...
, thought to be written between 414 and 412 BC. It follows the orphan Ion in the discovery of his origins.

Creusa, daughter of Erechtheus
Erechtheus
Erechtheus in Greek mythology was the name of an archaic king of Athens, the re-founder of the polis and a double at Athens for Poseidon, as "Poseidon Erechtheus"...
, was a noble native of Athens
Athens
Athens , is the capital and largest city of Greece. Athens dominates the Attica region and is one of the world's oldest cities, as its recorded history spans around 3,400 years. Classical Athens was a powerful city-state...
. The god Apollo
Apollo
Apollo is one of the most important and complex of the Olympian deities in Greek and Roman mythology...
raped her in a cave; there she gave birth to his son and intended to kill him by exposure. She keeps all this a secret. Many years later she was near the end of child bearing age, and had so far been unable to have a child with her husband Xuthus, a Thessalian and son of Aeolus
Aeolus
Aeolus was the ruler of the winds in Greek mythology. In fact this name was shared by three mythic characters. These three personages are often difficult to tell apart, and even the ancient mythographers appear to have been perplexed about which Aeolus was which...
. So they traveled to Delphi to seek a sign from the oracles.

Ion begins with Hermes explaining how he had saved the exposed child and delivered him to the temple of Apollo in Delphi. He grew up as an orphan, and was taken care of by the Pythian Priestess. The audience is aware that this child Ion is Creusa's son, although the characters are still in the dark.

Creusa and her handmaidens arrive at the temple and meet Ion, and their respective backgrounds are relayed to each other. However, Creusa makes him believe the woman she is speaking of is not herself. Xuthus then arrives at the temple and is told a prophecy that the first man he meets when leaving the temple is his son. However, it was a false prophecy as the man he meets is Ion. Xuthus gives him this name Ion, "in accordance with what happened, for that thou wert the first to cross my path as I came forth from Apollo's sanctuary." (as translated by Edward P. Coleridge). After some discussion, the two both believe the prophecy and are happy. But they decide it would be in everyone's best interest if it were kept secret for a while.

The handmaidens are unable to keep this secret, despite Xuthus's threatened penalty of death to whoever spills it. Creusa receives some bad advice from her old servant, and she decides to murder Ion. Using a drop of Gorgon
Gorgon
In Greek mythology, the Gorgon was a terrifying female creature. The name derives from the Greek word gorgós, which means "dreadful." While descriptions of Gorgons vary across Greek literature, the term commonly refers to any of three sisters who had hair of living, venomous snakes, and a...
's blood she inherited, she has the servant attempt to poison him. However, the attempt fails and she is found out. In order to escape death, she seeks protection in the temple. Ion goes after her seeking revenge for the murder plot.

In the temple, they are given clues from the priestess as to Ion's true origin: the items he was found in. Creusa discovers Ion is her son, and with these clues she proves it to him as well. Despite her having attempted to kill her son twice, and him kill her once, they become overjoyed with the discovery and make up. Athena comes down at the end and puts any doubt to rest, and gives the reason for the earlier false prophecy of him being Xuthus son. It was to give Ion a noble position, rather than being considered a bastard. She foretells that Ion will one day rule, and his name will be given to the land in his honor.