Encyclopedia
The internal iliac artery (formerly known as the hypogastric artery) is the main artery
Artery
Arteries are blood vessels that carry blood away from the heart. This blood is normally oxygenated, exceptions made for the pulmonary and umbilical arteries....
of the pelvis
Pelvis
In human anatomy, the pelvis is the lower part of the trunk, between the abdomen and the lower limbs .The pelvis includes several structures:...
.

The internal iliac artery supplies the walls and viscera of the pelvis
Pelvis
In human anatomy, the pelvis is the lower part of the trunk, between the abdomen and the lower limbs .The pelvis includes several structures:...
, the buttock, the reproductive organs, and the medial compartment of the thigh
Thigh
In humans the thigh is the area between the pelvis and the knee. Anatomically, it is part of the lower limb.The single bone in the thigh is called the femur...
. The vesicular branches of the internal iliac arteries supply the bladder

The following are relations of the artery at various points: it is posterior to the ureter
Ureter
In human anatomy, the ureters are muscular tubes that propel urine from the kidneys to the urinary bladder. In the adult, the ureters are usually long and ~3-4 mm in diameter....
, anterior to the internal iliac vein
Internal iliac vein
The internal iliac vein begins near the upper part of the greater sciatic foramen, passes upward behind and slightly medial to the Internal iliac artery and, at the brim of the pelvis, joins with the external iliac vein to form the common iliac vein.-Tributaries:With the exception of the fetal...
, the lumbosacral trunk
Lumbosacral trunk
The lumbosacral trunk is nervous tissue that connects the lumbar plexus with the sacral plexus.-Structure:The lumbosacral trunk comprises the whole of the anterior division of the fifth and a part of that of the fourth lumbar nerve; it appears at the medial margin of the psoas major and runs...
, and the piriformis muscle
Piriformis muscle
The piriformis is a muscle in the gluteal region of the lower limb. It was first named by Spigelius, a professor from the University of Padua in the 16th century.- Origin and insertion :...
; near its origin, it is medial to the external iliac vein
External iliac vein
The external iliac veins are large veins that connect the femoral veins to the common iliac veins. Their origin is at the inferior margin of the inguinal ligaments and they terminate when they join the internal iliac veins ....
, which lies between it and the psoas major muscle
Psoas major muscle
-External links: - "Posterior Abdominal Wall: Muscles of the Posterior Abdominal Wall"* *...
; it is above the obturator nerve
Obturator nerve
The obturator nerve in human anatomy arises from the ventral divisions of the second, third, and fourth lumbar nerves; the branch from the third is the largest, while that from the second is often very small.-Path:...
.

The following are the branches of internal iliac artery. Because it is variable, a listed artery may not be a direct branch, but instead might arise off a direct branch. 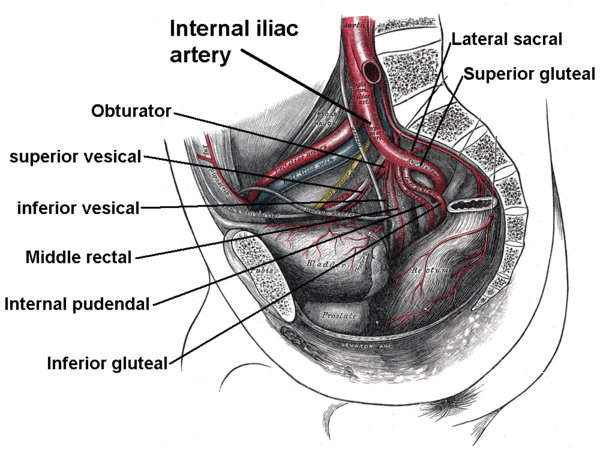 In the fetus
Fetus
A fetus is a developing mammal or other viviparous vertebrate after the embryonic stage and before birth.In humans, the fetal stage of prenatal development starts at the beginning of the 11th week in gestational age, which is the 9th week after fertilization.-Etymology and spelling variations:The...
, the internal iliac artery is twice as large as the external iliac, and is the direct continuation of the common iliac.

It ascends along the side of the bladder
Urinary bladder
The urinary bladder is the organ that collects urine excreted by the kidneys before disposal by urination. A hollow muscular, and distensible organ, the bladder sits on the pelvic floor...
, and runs upward on the back of the anterior wall of the abdomen to the umbilicus
Navel
The navel is a scar on the abdomen caused when the umbilical cord is removed from a newborn baby...
, converging toward its fellow of the opposite side.

In two-thirds of a large number of cases, the length of the internal iliac varied between 2.25 and 3.4 cm.; in the remaining third it was more frequently longer than shorter, the maximum length being about 7 cm. the minimum about 1 cm.

The place of division of the internal iliac artery varies between the upper margin of the sacrum
Sacrum
In vertebrate anatomy the sacrum is a large, triangular bone at the base of the spine and at the upper and back part of the pelvic cavity, where it is inserted like a wedge between the two hip bones. Its upper part connects with the last lumbar vertebra, and bottom part with the coccyx...
and the upper border of the greater sciatic foramen
Greater sciatic foramen
-Boundaries:It is bounded as follows:* anterolaterally by the greater sciatic notch of the illium* posteromedially by the sacrotuberous ligament* inferiorly by the sacrospinous ligament and the ischial spine* superiorly by the anterior sacroilliac ligament...
.

The right and left hypogastric arteries in a series of cases often differed in length, but neither seemed constantly to exceed the other.

The circulation after ligature of the internal iliac artery is carried on by the anastomoses of: