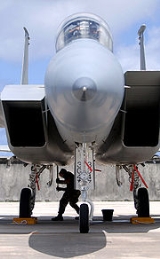 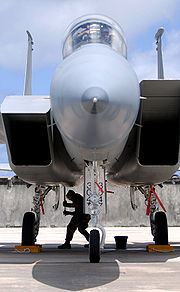 Ideally, the oblique shock wave should intercept the air intake lip, thus avoiding air spillage and pre-entry drag on the outer boundary of the deflected streamtube. For a fixed geometry intake at zero incidence, this condition can only be achieved at one particular flight Mach number, because the angle of the shock wave (to the longitudinal direction) becomes more acute with increasing aircraft speed.

Some supersonic intakes feature two or more ramps, operating in series, to generate multiple oblique shock waves. Each downstream ramp is steeper in inclination than the previous ramp. These intakes are usually more efficient than single (oblique) shock wave inlets.
For a fixed geometry it is feasible to use curved intakes without any shocks before the final normal shock.
Modern fighter jets (like the F-22 Raptor
F-22 Raptor
The Lockheed Martin/Boeing F-22 Raptor is a single-seat, twin-engine fifth-generation supermaneuverable fighter aircraft that uses stealth technology. It was designed primarily as an air superiority fighter, but has additional capabilities that include ground attack, electronic warfare, and signals...
) have engines so powerful that top speed is not limited by them,
thus spillage at the intake is acceptable and a lightweight fixed geometry chosen. The nacelle has a round outer lip to defect spillage back into the longitudinal direction. The nacelle thus gets a very large cross section with more volume than needed for the engine
and in the F-22 the nacelles are combined with the fuselage to create a large weapon bay, place for fuel, and a wide body, which generates some lift.
Modern jets have a horizontal ramp thus spillage at least produces some lift.
In case of the F-22 the inlet has two ramps placed in a diamond shape, thus for most Mach- and thrust-conditions spillage occurs only at the aft / lower corner of that diamond.
In case of the F-22 the leading edges of the wing become supersonic at Mach 1.8 and certainly are an as large source of wave drag as the inlet.

Variable geometry intakes, such as those on Concorde
Concorde
Aérospatiale-BAC Concorde was a turbojet-powered supersonic passenger airliner, a supersonic transport . It was a product of an Anglo-French government treaty, combining the manufacturing efforts of Aérospatiale and the British Aircraft Corporation...
aircraft, vary the ramp angle to focus the oblique shock wave/s onto the intake lip.
The source of this article is wikipedia, the free encyclopedia.  The text of this article is licensed under the GFDL.