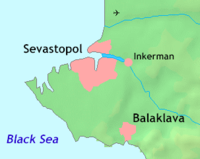 Inkerman is said to mean a "cave fortress" in Turkish. During the Soviet
Soviet Union
The Soviet Union , officially the Union of Soviet Socialist Republics , was a constitutionally socialist state that existed in Eurasia between 1922 and 1991....
era (in 1976-1991) it was known as Bilokamiansk or Belokamensk , which literally means "White Stone City", as a reference to soft white stone quarried in the area and commonly used for construction, but has since been returned its pre-Soviet name.

The area has been inhabited since ancient times. A cave monastery of St. Clement
Inkerman Cave Monastery
The Inkerman Monastery of St. Clement is a cave monastery in a cliff rising near the mouth of the Black River, in the city of Inkerman, administered as part of the sea port of Sevastopol. It was founded in 1850 on the site of a medieval Byzantine monastery where the relics of St. Clement were...
was founded near Inkerman in the 8th century by Byzantine icon-worshippers fleeing persecution in their homeland. The monastery was closed during the Soviet era but has now been restored and brought back into use.

Kalamita, a medieval century fortress expanded in the 14th century, now lying in ruins, was built at a strategic clifftop overlooking Inkerman and the Inlet. It was abandoned by a Turkish garrison in the 18th century after the raids by the Cossacks ended but a small settlement at the base of the cliff remained.

The town became the centre of worldwide attention in 1854 during the Crimean War
Crimean War
The Crimean War was a conflict fought between the Russian Empire and an alliance of the French Empire, the British Empire, the Ottoman Empire, and the Kingdom of Sardinia. The war was part of a long-running contest between the major European powers for influence over territories of the declining...
, when Inkerman was the scene of the Battle of Inkerman
Battle of Inkerman
The Battle of Inkerman was fought during the Crimean War on November 5, 1854 between the allied armies of Britain and France against the Imperial Russian Army. The battle broke the will of the Russian Army to defeat the allies in the field, and was followed by the Siege of Sevastopol...
and the Battle of Chernaya River
Battle of Chernaya River
The Battle of the Chernaya was a battle by the Chernaya River fought during the Crimean War on August 16, 1855. The battle was fought between Russian troops and a coalition of French, Sardinian and Ottoman troops. The Chernaya River is on the outskirts of Sevastopol...
, both victorious for the French
France
The French Republic , The French Republic , The French Republic , (commonly known as France , is a unitary semi-presidential republic in Western Europe with several overseas territories and islands located on other continents and in the Indian, Pacific, and Atlantic oceans. Metropolitan France...
and the British
United Kingdom
The United Kingdom of Great Britain and Northern IrelandIn the United Kingdom and Dependencies, other languages have been officially recognised as legitimate autochthonous languages under the European Charter for Regional or Minority Languages...
troops.

During the Soviet
Soviet Union
The Soviet Union , officially the Union of Soviet Socialist Republics , was a constitutionally socialist state that existed in Eurasia between 1922 and 1991....
times, a large underground ammunition warehouse of the Black Sea Fleet
Black Sea Fleet
The Black Sea Fleet is a large operational-strategic sub-unit of the Russian Navy, operating in the Black Sea and the Mediterranean Sea since the late 18th century. It is based in various harbors of the Black Sea and the Sea of Azov....
was situated under rocky cliffs in the Inkerman area. The storage was abandoned in 1970s after an explosion that damaged the facility but did not detonate all its stockpiles. However, no efforts to secure the site have been made until 1990s when local residents began salvaging explosives for sale which led to a number of deaths. Ukrainian Army engineer corps started extracting and demolishing outdated ammunitions in 2000 under a special government program.

Inkerman has since largely returned to its pre-war obscurity, serving as a suburb of Sevastopol linked to the downtown core by commuter ferries. One of the major Crimean wineries
Winery
A winery is a building or property that produces wine, or a business involved in the production of wine, such as a wine company. Some wine companies own many wineries. Besides wine making equipment, larger wineries may also feature warehouses, bottling lines, laboratories, and large expanses of...
featuring the Inkerman label is located in the adjacent area. A popular hiking trail leading into Crimean Mountains begins just east of the town.