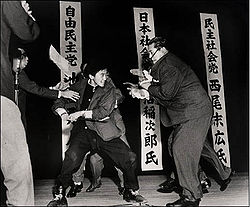 Inejiro Asanuma was a Japan
Japan
Japan is an island nation in East Asia. Located in the Pacific Ocean, it lies to the east of the Sea of Japan, China, North Korea, South Korea and Russia, stretching from the Sea of Okhotsk in the north to the East China Sea and Taiwan in the south...
ese politician
Politician
A politician, political leader, or political figure is an individual who is involved in influencing public policy and decision making...
, and head of the Japanese Socialist Party. Asanuma was noted for speaking publicly about Socialism and economic and cultural opportunities. His support of the Chinese Communist Party was criticized both from the right and by his colleagues.

Asanuma was assassinated
Assassination
To carry out an assassination is "to murder by a sudden and/or secret attack, often for political reasons." Alternatively, assassination may be defined as "the act of deliberately killing someone, especially a public figure, usually for hire or for political reasons."An assassination may be...
by 17-year-old Otoya Yamaguchi
Otoya Yamaguchi
was a Japanese ultranationalist, a member of a right-wing Uyoku dantai group, who assassinated Inejiro Asanuma by wakizashi on October 12, 1960 at Tokyo's Hibiya Hall during a political debate in advance of parliamentary elections...
, an extreme rightist, at a televised
Television
Television is a telecommunication medium for transmitting and receiving moving images that can be monochrome or colored, with accompanying sound...
rally for the upcoming Lower-house election. Yamaguchi rushed and fatally stabbed Asanuma, and was subdued moments later. The entire incident was captured on camera.

Inejiro Asanuma's mother died during his birth, leaving him to be raised by his father, who later died at the age of 42 of cancer.

In the 1930s he became a national socialist, lending his support to the war policies of the Japanese Army
Imperial Japanese Army
-Foundation:During the Meiji Restoration, the military forces loyal to the Emperor were samurai drawn primarily from the loyalist feudal domains of Satsuma and Chōshū...
, and served in the Diet
Diet
Diet, in relation to food, might mean:*Diet , the sum of the food consumed by an organism or group*Dieting, the deliberate selection of food to control body weight or nutrient intake*Diet food, foods that aid in dieting...
from 1936. However, he withdrew his candidacy from the 1942 election
Japanese general election, 1942
The 21st General Election of Japan of the House of Representatives took place in Japan on April 30, 1942. It was the only election in wartime Japan. At this time, the lower house no longer had any significant executive and legislative power, and power went to the military since 1936...
and retired from politics until after the war.

He was widely criticized for a 1959 incident where he went to Communist-controlled Mainland China
Mainland China
Mainland China, the Chinese mainland or simply the mainland, is a geopolitical term that refers to the area under the jurisdiction of the People's Republic of China . According to the Taipei-based Mainland Affairs Council, the term excludes the PRC Special Administrative Regions of Hong Kong and...
and called the United States "the shared enemy of China and Japan". When he returned from this trip he wore a Mao suit
Mao suit
The modern Chinese tunic suit is a style of male attire known in China as the Zhongshan suit , and known in the West as the Mao suit...
while disembarking from his plane in Japan, sparking criticism from Socialist leaders.