Encyclopedia
The , based in Tokyo
Tokyo
, ; officially , is one of the 47 prefectures of Japan. Tokyo is the capital of Japan, the center of the Greater Tokyo Area, and the largest metropolitan area of Japan. It is the seat of the Japanese government and the Imperial Palace, and the home of the Japanese Imperial Family...
, Japan
Japan
Japan is an island nation in East Asia. Located in the Pacific Ocean, it lies to the east of the Sea of Japan, China, North Korea, South Korea and Russia, stretching from the Sea of Okhotsk in the north to the East China Sea and Taiwan in the south...
, was one of the largest bank
Bank
A bank is a financial institution that serves as a financial intermediary. The term "bank" may refer to one of several related types of entities:...
s in the world during the latter half of the 20th century. 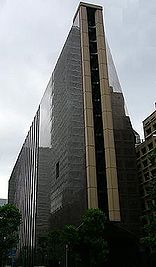 IBJ was originally founded as a public-sector bank under the Industrial Bank of Japan Act of 1902. At that time, Japan was in the throes of its industrial revolution
Industrial Revolution
The Industrial Revolution was a period from the 18th to the 19th century where major changes in agriculture, manufacturing, mining, transportation, and technology had a profound effect on the social, economic and cultural conditions of the times...
, and there was a strong demand for long-term investment
Investment
Investment has different meanings in finance and economics. Finance investment is putting money into something with the expectation of gain, that upon thorough analysis, has a high degree of security for the principal amount, as well as security of return, within an expected period of time...
capital. IBJ raised funds by issuing bank debentures.

IBJ also acted as the trustee in corporate debenture
Debenture
A debenture is a document that either creates a debt or acknowledges it. In corporate finance, the term is used for a medium- to long-term debt instrument used by large companies to borrow money. In some countries the term is used interchangeably with bond, loan stock or note...
issues - notably, the major Japanese railway company issue of 1906 in London
London
London is the capital city of :England and the :United Kingdom, the largest metropolitan area in the United Kingdom, and the largest urban zone in the European Union by most measures. Located on the River Thames, London has been a major settlement for two millennia, its history going back to its...
, amount to the then-enormous sum of 1 million pounds sterling. These activities contributed to the building of the Japanese domestic securities market
Capital market
A capital market is a market for securities , where business enterprises and governments can raise long-term funds. It is defined as a market in which money is provided for periods longer than a year, as the raising of short-term funds takes place on other markets...
, and to the generating of a higher profile for Japanese borrowers in the international market.

This early experience of a sophisticated mix of corporate and investment banking
Investment banking
An investment bank is a financial institution that assists individuals, corporations and governments in raising capital by underwriting and/or acting as the client's agent in the issuance of securities...
with exposure to trust work is unique to IBJ amongst Japanese banks. In the original Act, there was the wording, “Trust business related to local government
Local government
Local government refers collectively to administrative authorities over areas that are smaller than a state.The term is used to contrast with offices at nation-state level, which are referred to as the central government, national government, or federal government...
bond
Bond (finance)
In finance, a bond is a debt security, in which the authorized issuer owes the holders a debt and, depending on the terms of the bond, is obliged to pay interest to use and/or to repay the principal at a later date, termed maturity...
, corporate bonds, and equities
Stock
The capital stock of a business entity represents the original capital paid into or invested in the business by its founders. It serves as a security for the creditors of a business since it cannot be withdrawn to the detriment of the creditors...
”. This was the first time for the term “trust”, or , to appear in the Japanese statute book.

The 1918 amendment to the IBJ Act permitted the underwriting
Underwriting
Underwriting refers to the process that a large financial service provider uses to assess the eligibility of a customer to receive their products . The name derives from the Lloyd's of London insurance market...
and offering of equities. At that point, IBJ had the full capabilities for what is now termed investment banking. However, that was at what proved to be the peak of the demand created for Japanese products by the First World War
World War I
World War I , which was predominantly called the World War or the Great War from its occurrence until 1939, and the First World War or World War I thereafter, was a major war centred in Europe that began on 28 July 1914 and lasted until 11 November 1918...
and the consequent economic boom.

Thereafter, the next 30 years of Japanese history encompassed many adversities for society in general and for financial institutions in particular: the Great Kanto Earthquake, the Showa Financial Panic, and finally, the Second World War
World War II
World War II, or the Second World War , was a global conflict lasting from 1939 to 1945, involving most of the world's nations—including all of the great powers—eventually forming two opposing military alliances: the Allies and the Axis...
and the postwar recovery.

IBJ became a private-sector bank in 1950 and took on legal form under the Long-Term Bank Act of 1952. However the Act was framed within the terms of the US-led Occupation policy of compartmentalizing financial services. IBJ was forced to retreat from much of its former investment banking activities and return principally to long-term lending funding by issuing bank debentures.

During the high-growth period of the Japanese economy in the 1960s, IBJ was particularly active in financing steel
Steel
Steel is an alloy that consists mostly of iron and has a carbon content between 0.2% and 2.1% by weight, depending on the grade. Carbon is the most common alloying material for iron, but various other alloying elements are used, such as manganese, chromium, vanadium, and tungsten...
production, shipping
Shipping
Shipping has multiple meanings. It can be a physical process of transporting commodities and merchandise goods and cargo, by land, air, and sea. It also can describe the movement of objects by ship.Land or "ground" shipping can be by train or by truck...
, shipbuilding
Shipbuilding
Shipbuilding is the construction of ships and floating vessels. It normally takes place in a specialized facility known as a shipyard. Shipbuilders, also called shipwrights, follow a specialized occupation that traces its roots to before recorded history.Shipbuilding and ship repairs, both...
, and automobile
Automobile
An automobile, autocar, motor car or car is a wheeled motor vehicle used for transporting passengers, which also carries its own engine or motor...
manufacturing. Following the first oil crisis
1973 oil crisis
The 1973 oil crisis started in October 1973, when the members of Organization of Arab Petroleum Exporting Countries or the OAPEC proclaimed an oil embargo. This was "in response to the U.S. decision to re-supply the Israeli military" during the Yom Kippur war. It lasted until March 1974. With the...
, Japan moved to a pattern of lower growth as a mature economy, and IBJ expanded its customer base at home, and started the process of expansion overseas.

In Japan, the wholesaling of bank debentures to major financial institutions and the regional banks led to a network of strong relationships. This was all supported by the fact that, originally a public-sector bank, IBJ had no keiretsu
Keiretsu
A is a set of companies with interlocking business relationships and shareholdings. It is a type of business group. The keiretsu has maintained dominance over the Japanese economy for the greater half of the twentieth century....
affiliations: IBJ has always been independent of the large corporate groupings characteristic of Japan and was hence number 2 banker to each and all of the major keiretsu groupings. Internationally, IBJ was free to pursue its investment banking ambitions.