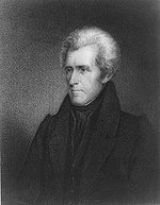 Overview
The Indian Removal
Indian Removal
Indian removal was a nineteenth century policy of the government of the United States to relocate Native American tribes living east of the Mississippi River to lands west of the river...
Act was signed into law by President
President of the United States
The President of the United States of America is the head of state and head of government of the United States. The president leads the executive branch of the federal government and is the commander-in-chief of the United States Armed Forces....
Andrew Jackson
Andrew Jackson
Andrew Jackson was the seventh President of the United States . Based in frontier Tennessee, Jackson was a politician and army general who defeated the Creek Indians at the Battle of Horseshoe Bend , and the British at the Battle of New Orleans...
on May 28, 1830.
The Removal Act was strongly supported in the South
Southern United States
The Southern United States—commonly referred to as the American South, Dixie, or simply the South—constitutes a large distinctive area in the southeastern and south-central United States...
, where states were eager to gain access to lands inhabited by the Five Civilized Tribes
Five Civilized Tribes
The Five Civilized Tribes were the five Native American nations—the Cherokee, Chickasaw, Choctaw, Creek, and Seminole—that were considered civilized by Anglo-European settlers during the colonial and early federal period because they adopted many of the colonists' customs and had generally good...
. In particular, Georgia
Georgia (U.S. state)
Georgia is a state located in the southeastern United States. It was established in 1732, the last of the original Thirteen Colonies. The state is named after King George II of Great Britain. Georgia was the fourth state to ratify the United States Constitution, on January 2, 1788...
, the largest state at that time, was involved in a contentious jurisdictional dispute with the Cherokee
Cherokee
The Cherokee are a Native American people historically settled in the Southeastern United States . Linguistically, they are part of the Iroquoian language family...
nation. President Jackson hoped removal would resolve the Georgia crisis. The Indian Removal Act was also very controversial.

Please state the total number of native americans that died as a result of the Relocation act , Thank you

How did the indian removal act contribute to the growth of the United states?
More

What were the terms of the removal act?
More 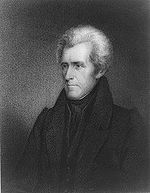 Most European Americans favored the passage of the Indian Removal Act, though there was significant opposition. Many Christian missionaries, most notably missionary organizer Jeremiah Evarts
Jeremiah Evarts
Jeremiah F. Evarts was a Christian missionary, reformer, and activist for the rights of American Indians in the United States, and a leading opponent of the Indian removal policy of the United States government.-Early years:...
, protested against passage of the Act. Future U.S. President Abraham Lincoln
Abraham Lincoln
Abraham Lincoln was the 16th President of the United States, serving from March 1861 until his assassination in April 1865. He successfully led his country through a great constitutional, military and moral crisis – the American Civil War – preserving the Union, while ending slavery, and...
also opposed the Indian Removal Act. In Congress, New Jersey Senator
United States Senate
The United States Senate is the upper house of the bicameral legislature of the United States, and together with the United States House of Representatives comprises the United States Congress. The composition and powers of the Senate are established in Article One of the U.S. Constitution. Each...
Theodore Frelinghuysen
Theodore Frelinghuysen
Theodore Frelinghuysen was an American politician, serving as New Jersey Attorney General, United States Senator, and Mayor of Newark, New Jersey before running as a candidate for Vice President with Henry Clay on the Whig ticket in the election of 1844...
and Congressman Davy Crockett
Davy Crockett
David "Davy" Crockett was a celebrated 19th century American folk hero, frontiersman, soldier and politician. He is commonly referred to in popular culture by the epithet "King of the Wild Frontier". He represented Tennessee in the U.S...
of Tennessee
Tennessee
Tennessee is a U.S. state located in the Southeastern United States. It has a population of 6,346,105, making it the nation's 17th-largest state by population, and covers , making it the 36th-largest by total land area...
spoke out against the legislation. The Removal Act was passed after bitter debate in Congress.

The Removal Act paved the way for the reluctant—and often forcible—emigration of tens of thousands of American Indians to the West. The first removal treaty signed after the Removal Act was the Treaty of Dancing Rabbit Creek
Treaty of Dancing Rabbit Creek
The Treaty of Dancing Rabbit Creek was a treaty signed on September 27, 1830 between the Choctaw and the United States Government. This was the first removal treaty carried into effect under the Indian Removal Act...
on September 27, 1830, in which Choctaw
Choctaw
The Choctaw are a Native American people originally from the Southeastern United States...
s in Mississippi
Mississippi
Mississippi is a U.S. state located in the Southern United States. Jackson is the state capital and largest city. The name of the state derives from the Mississippi River, which flows along its western boundary, whose name comes from the Ojibwe word misi-ziibi...
ceded land east of the river in exchange for payment and land in the West. A Choctaw chief, thought to be Thomas Harkins or Nitikechi, was quoted in the Arkansas Gazette as saying the 1831 Choctaw removal was a "trail of tears and death". The Treaty of New Echota
Treaty of New Echota
The Treaty of New Echota was a treaty signed on December 29, 1835, in New Echota, Georgia by officials of the United States government and representatives of a minority Cherokee political faction, known as the Treaty Party...
, signed in 1835, resulted in the removal of the Cherokee on the Trail of Tears
Trail of Tears
The Trail of Tears is a name given to the forced relocation and movement of Native American nations from southeastern parts of the United States following the Indian Removal Act of 1830...
. The Seminoles did not leave peacefully as did other tribes; along with fugitive slaves they resisted the removal. The Second Seminole War
Second Seminole War
The Second Seminole War, also known as the Florida War, was a conflict from 1835 to 1842 in Florida between various groups of Native Americans collectively known as Seminoles and the United States, part of a series of conflicts called the Seminole Wars...
lasted from 1835 to 1842 and resulted in the forced removal of Seminoles, only a small number to remain, and around 3,000 were killed amongst American soldiers and Seminoles.