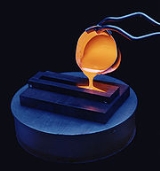 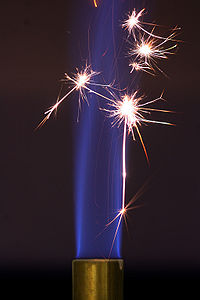 In practice, virtually all solid or liquid substances start to glow around 798K (525°C), with a very dull red color, when no chemical reactions take place that produce light as a result of an exothermic process. This limit is called Draper point
Draper point
The Draper point is the approximate temperature above which almost all solid materials visibly glow as a result of blackbody radiation. It was established at 977˚ F by John William Draper in 1847....
. The incandescence does not vanish below that temperature, but it is too weak in the visible spectrum to be perceivable.

Fluorescent lamp
Fluorescent lamp
A fluorescent lamp or fluorescent tube is a gas-discharge lamp that uses electricity to excite mercury vapor. The excited mercury atoms produce short-wave ultraviolet light that then causes a phosphor to fluoresce, producing visible light. A fluorescent lamp converts electrical power into useful...
s do not function by incandescence, rather by a combination of thermionic emission
Thermionic emission
Thermionic emission is the heat-induced flow of charge carriers from a surface or over a potential-energy barrier. This occurs because the thermal energy given to the carrier overcomes the binding potential, also known as work function of the metal. The charge carriers can be electrons or ions, and...
and atomic excitation
Excited state
Excitation is an elevation in energy level above an arbitrary baseline energy state. In physics there is a specific technical definition for energy level which is often associated with an atom being excited to an excited state....
caused by collision with high energy electrons. In an incandescent lamp, only the electrons at the top of the band can participate. While higher temperatures can increase efficiency, there are currently no materials able to withstand such temperatures which would be appropriate for use in lamps.

The word incandescent is also used figuratively to describe a person who is wound up to a sustained white heat of anger about something.