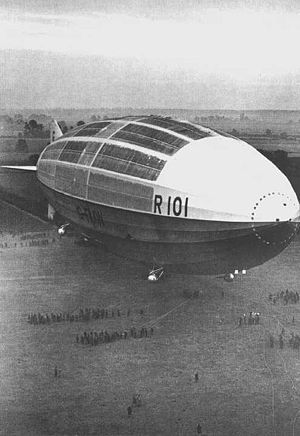 The British Imperial Airship Scheme was a project to improve communication with the far corners of the British Empire
British Empire
The British Empire comprised the dominions, colonies, protectorates, mandates and other territories ruled or administered by the United Kingdom. It originated with the overseas colonies and trading posts established by England in the late 16th and early 17th centuries. At its height, it was the...
by establishing air routes using airships. This led to the construction of two large and technically advanced airships, the R100
R100
HM Airship R100 was a privately designed and built rigid airship made as part of a two-ship competition to develop new techniques for a projected larger commercial airship for use on British empire routes...
and the R101
R101
R101 was one of a pair of British rigid airship completed in 1929 as part of a British government programme to develop civil airships capable of service on long-distance routes within the British Empire. It was designed and built by an Air Ministry-appointed team and was effectively in competition...
.

The Burney Scheme, named after Sir Dennistoun Burney
Charles Dennistoun Burney
Sir Charles Dennistoun Burney, 2nd Baronet was an English aeronautical engineer, private inventor and Conservative Party politician....
, was proposed to Vickers
Vickers
Vickers was a famous name in British engineering that existed through many companies from 1828 until 1999.-Early history:Vickers was formed in Sheffield as a steel foundry by the miller Edward Vickers and his father-in-law George Naylor in 1828. Naylor was a partner in the foundry Naylor &...
in 1921 for the construction of commercial airships for establishing airline services between Britain and the colonies of the British Empire
British Empire
The British Empire comprised the dominions, colonies, protectorates, mandates and other territories ruled or administered by the United Kingdom. It originated with the overseas colonies and trading posts established by England in the late 16th and early 17th centuries. At its height, it was the...
. The Admiralty
Admiralty
The Admiralty was formerly the authority in the Kingdom of England, and later in the United Kingdom, responsible for the command of the Royal Navy...
became involved because it saw the scheme as a means of continuing airship technology and operational experience at modest cost via subsidies, just as it subsidized British passenger ships. Nevil Shute Norway wrote that: It was generally agreed in 1924 that the aeroplane would never be a very suitable vehicle for carrying passengers across the oceans, and that airships would operate all the long-distance routes of the future. We were all quite wrong, of course but at that time it seemed reasonable; no aeroplane had yet succeeded in crossing the Atlantic from east to west, whereas a German airship, the Graf Zeppelin
LZ 127 Graf Zeppelin
LZ 127 Graf Zeppelin was a German built and operated passenger-carrying hydrogen-filled rigid airship which operated commercially from 1928 to 1937. It was named after the German pioneer of airships, Ferdinand von Zeppelin, who was a Graf or Count in the German nobility. During its operating life,...
, was already carrying commercial loads of passengers both ways to South America upon a regular schedule.

Following the election of the MacDonald
Ramsay MacDonald
James Ramsay MacDonald, PC, FRS was a British politician who was the first ever Labour Prime Minister, leading a minority government for two terms....
government in 1924, the Burney Scheme was rejected and replaced by the Imperial Airship Scheme. Under this scheme there would be designs from a Vickers subsidiary, the Airship Guarantee Company led by Burney, and the Royal Airship Works at Cardington
Cardington, Bedfordshire
Cardington is a village and civil parish in the Borough of Bedford in Bedfordshire, EnglandPart of the ancient hundred of Wixamtree, the settlement is best known in connection with the Cardington airship works founded by Short Brothers during World War I, which later became an RAF training station...
. Vickers would use technology already developed and available to build the R100
R100
HM Airship R100 was a privately designed and built rigid airship made as part of a two-ship competition to develop new techniques for a projected larger commercial airship for use on British empire routes...
and the Royal Airship Works would build the R101
R101
R101 was one of a pair of British rigid airship completed in 1929 as part of a British government programme to develop civil airships capable of service on long-distance routes within the British Empire. It was designed and built by an Air Ministry-appointed team and was effectively in competition...
. The R101 structure would be built by a private company (Boulton Paul at Norwich) and assembled at Cardington

The two ships were soon labelled the "Capitalist" ship (R100) and the "Socialist" ship (R101). Further airships would include the best features from both.

The men responsible for directing their design were Sir Barnes Wallis
Barnes Wallis
Sir Barnes Neville Wallis, CBE FRS, RDI, FRAeS , was an English scientist, engineer and inventor. He is best known for inventing the bouncing bomb used by the RAF in Operation Chastise to attack the dams of the Ruhr Valley during World War II...
and Lt.Col. V. C. Richmond. Nevil Shute Norway
Nevil Shute
Nevil Shute Norway was a popular British-Australian novelist and a successful aeronautical engineer. He used his full name in his engineering career, and 'Nevil Shute' as his pen name, in order to protect his engineering career from any potential negative publicity in connection with his novels.-...
was chief calculator on R100, while Sir Harold Roxbee Cox
Harold Roxbee Cox
Harold Roxbee Cox, Baron Kings Norton, Kt, FEng, FIMechE was a British aeronautical engineer.-Life:He was the son of William John and Amelia Roxbee Cox . As a child, his father took him to early air shows and air races, and his imagination was fuelled by pilots of the time such as Claude...
was not only responsible for the engineering but also the aerodynamics of the R101.

The R100 was a generally conservative design, with certain parts – for example, gas valves – bought from the Zeppelin company
Luftschiffbau Zeppelin
Luftschiffbau Zeppelin GmbH is a German company which, during the early 20th century, was a leader in the design and manufacture of rigid airships, specifically of the Zeppelin type. The company was founded by Count Ferdinand von Zeppelin...
, and (eventually) used aeroplane engines. The R101 was a very innovative design with novel and often radical changes in structure, gas bag wiring, gas valves, and it used diesel engines for safety (though they used petrol starting engines, only one of which had been replaced by a diesel engine).

Both were delayed. The R100 by the poor construction facilities at Howden
RNAS Howden
RNAS Howden was an airship station near the town of Howden south-west of York, UK. Opened on 26 June 1916 during the First World War, to cover the East Coast ports shipping from attacks by German U-boats. From 1916 to 1918 Howden was a Royal Naval Air Service establishment...
, and labour troubles - a product of the necessity of delivering the airship to a fixed price. The R101 was delayed by the myriad of technical and developmental problems arising from the many innovative systems and design features. Both airships were overweight, the R101 badly so, and neither had an adequate payload for the proposed commercial services.

In August 1930, R100 made the transatlantic journey to North America, vising Quebec, Montreal and Toronto.

R101 was dispatched on a flight to India under marginal conditions in October 1930, with a hastily issued Certificate of Airworthiness. She crashed soon after leaving on a stormy night in France. The R101 had had an extra gas cell inserted in the middle to give adequate lift for the trip to India, and this trip was to be the first full-load test with the additional section. The exact cause is still a matter of dispute amongst airship enthusiasts and historians to this day. Masefield lists thirteen factors; without any one of them the disaster might not have happened. The desire of the all involved to achieve a flight to India before the conclusion of the 1930 Imperial Conference (at which decisions would be taken on the future of the airship programme) led to a premature flight in adverse weather conditions.

But on 31 August 1931 the Cabinet decided to abandon British airship development, although Cardington would still keep a watching brief on overseas developments. The R100 was broken up. Proposals for the planned R102, R103 and R104 airships were now all abandoned. The loss of R101, the gathering world depression, and doubts about the optimistic financial forecasts, were all factors in these decisions.