Encyclopedia
Identity cleansing is defined as "confiscation of personal identification, passports, and other such documents in order to make it difficult or impossible for those driven out to return". 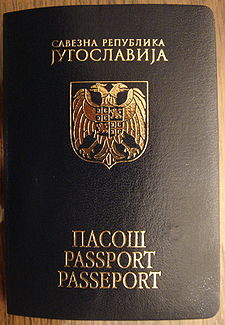 Expelled Kosovar Albanians were systematically stripped of identity and property documents including passport
Passport
A passport is a document, issued by a national government, which certifies, for the purpose of international travel, the identity and nationality of its holder. The elements of identity are name, date of birth, sex, and place of birth....
s, land titles, automobile license plates, identity cards and other documents. In conjunction with the policy of expelling ethnic Albanians from the province — "Operation Horseshoe
Operation Horseshoe
Operation Horseshoe is a name attributed to a large-scale antiterrorism campaign which during the NATO bombing escalated to ethnic cleansing of Kosovo Albanians carried out by Serbian Police and Yugoslav Army during the Kosovo War....
," as it came to be known — the Serbian forces would confiscate all documents that indicated the identity of those being expelled. Physicians for Human Rights
Physicians for Human Rights
Physicians for Human Rights was founded in 1986 by a small group of doctors who believed the unique scientific expertise and authority of health professionals could bring human rights violations to light and provide justice for victims...
reports that nearly 60 percent of respondents to its survey observed Serbian forces removing or destroying personal identification documents. Human Rights Watch
Human Rights Watch
Human Rights Watch is an international non-governmental organization that conducts research and advocacy on human rights. Its headquarters are in New York City and it has offices in Berlin, Beirut, Brussels, Chicago, Geneva, Johannesburg, London, Los Angeles, Moscow, Paris, San Francisco, Tokyo,...
also documented the common practice of "identity cleansing": refugees expelled toward Albania
Albania
Albania , officially known as the Republic of Albania , is a country in Southeastern Europe, in the Balkans region. It is bordered by Montenegro to the northwest, Kosovo to the northeast, the Republic of Macedonia to the east and Greece to the south and southeast. It has a coast on the Adriatic Sea...
were frequently stripped of their identity documents and forced to remove the license plates from their vehicles. This criminal practice suggesting the government
Government
Government refers to the legislators, administrators, and arbitrators in the administrative bureaucracy who control a state at a given time, and to the system of government by which they are organized...
was trying to block their return.

In addition to confiscating the relevant documents from their holders, efforts were also made to destroy any actual birth records (and other archives) which were maintained by governmental agencies, so as to make the "cleansing" complete (this latter tactic sometimes being referred to as archival cleansing).

This practice received worldwide condemnation, and evidence of it has been brought at the war crime
War crime
War crimes are serious violations of the laws applicable in armed conflict giving rise to individual criminal responsibility...
s trials held at The Hague
The Hague
The Hague is the capital city of the province of South Holland in the Netherlands. With a population of 500,000 inhabitants , it is the third largest city of the Netherlands, after Amsterdam and Rotterdam...
after the situation in Kosovo
Kosovo
Kosovo is a region in southeastern Europe. Part of the Ottoman Empire for more than five centuries, later the Autonomous Province of Kosovo and Metohija within Serbia...
was stabilized following the NATO bombing of Serbia and the subsequent collapse of its nationalist
Nationalism
Nationalism is a political ideology that involves a strong identification of a group of individuals with a political entity defined in national terms, i.e. a nation. In the 'modernist' image of the nation, it is nationalism that creates national identity. There are various definitions for what...
government. Despite difficulties due to Serbian "identity cleansing", UNMIK and OSCE registered 1.3 million voters until the October 2002 municipal elections.