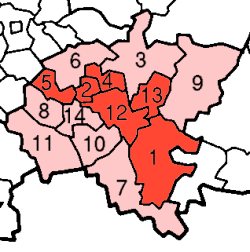 Before their capture by the Muscovite Russia in the 16th century the region belonged to Khazars
Khazars
The Khazars were semi-nomadic Turkic people who established one of the largest polities of medieval Eurasia, with the capital of Atil and territory comprising much of modern-day European Russia, western Kazakhstan, eastern Ukraine, Azerbaijan, large portions of the northern Caucasus , parts of...
, Volga Bulgaria
Volga Bulgaria
Volga Bulgaria, or Volga–Kama Bolghar, is a historic Bulgar state that existed between the seventh and thirteenth centuries around the confluence of the Volga and Kama rivers in what is now Russia.-Origin:...
, the Golden Horde
Golden Horde
The Golden Horde was a Mongol and later Turkicized khanate that formed the north-western sector of the Mongol Empire...
and the Khanate of Kazan
Khanate of Kazan
The Khanate of Kazan was a medieval Tatar state which occupied the territory of former Volga Bulgaria between 1438 and 1552. Its khans were the patrilineal descendants of Toqa Temür, the thirteenth son of Jochi and grandson of Genghis Khan. The khanate covered contemporary Tatarstan, Mari El,...
.