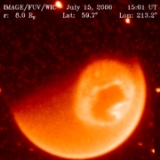 Encyclopedia
IMAGE or Explorer 78, was a NASA
NASA
The National Aeronautics and Space Administration is the agency of the United States government that is responsible for the nation's civilian space program and for aeronautics and aerospace research...
MIDEX mission that studied the global response of the Earth
Earth
Earth is the third planet from the Sun, and the densest and fifth-largest of the eight planets in the Solar System. It is also the largest of the Solar System's four terrestrial planets...
's magnetosphere
Magnetosphere
A magnetosphere is formed when a stream of charged particles, such as the solar wind, interacts with and is deflected by the intrinsic magnetic field of a planet or similar body. Earth is surrounded by a magnetosphere, as are the other planets with intrinsic magnetic fields: Mercury, Jupiter,...
to changes in the solar wind
Solar wind
The solar wind is a stream of charged particles ejected from the upper atmosphere of the Sun. It mostly consists of electrons and protons with energies usually between 1.5 and 10 keV. The stream of particles varies in temperature and speed over time...
. It was launched March 25, 2000 by a Delta II
Delta II
Delta II was an American space launch system, originally designed and built by McDonnell Douglas. Delta II is part of the Delta rocket family and was in service from 1989 until November 1, 2011...
rocket from Vandenberg AFB
Vandenberg Air Force Base
Vandenberg Air Force Base is a United States Air Force Base, located approximately northwest of Lompoc, California. It is under the jurisdiction of the 30th Space Wing, Air Force Space Command ....
and ceased operations in December 2005.

The IMAGE craft was placed in a 1,000×46,000 km orbit
Orbit
In physics, an orbit is the gravitationally curved path of an object around a point in space, for example the orbit of a planet around the center of a star system, such as the Solar System...
around the Earth, with an inclination
Inclination
Inclination in general is the angle between a reference plane and another plane or axis of direction.-Orbits:The inclination is one of the six orbital parameters describing the shape and orientation of a celestial orbit...
of 90° (passing over the pole
Geographical pole
A geographical pole is either of the two points—the north pole and the south pole—on the surface of a rotating planet where the axis of rotation meets the surface of the body...
s) and a 14.2 hour period. IMAGE was the first spacecraft dedicated to observing the magnetosphere of the Earth, and it produced comprehensive global images
Imaging
Imaging is the representation or reproduction of an object's outward form; especially a visual representation .- Imaging methodologies and technologies :...
of plasma
Plasma (physics)
In physics and chemistry, plasma is a state of matter similar to gas in which a certain portion of the particles are ionized. Heating a gas may ionize its molecules or atoms , thus turning it into a plasma, which contains charged particles: positive ions and negative electrons or ions...
in the inner magnetosphere. It did this using five instrument
Measuring instrument
In the physical sciences, quality assurance, and engineering, measurement is the activity of obtaining and comparing physical quantities of real-world objects and events. Established standard objects and events are used as units, and the process of measurement gives a number relating the item...
s: 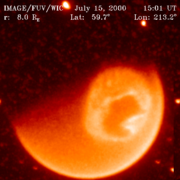 The CIDP as well as the Command & Data Handling Subsystem (main on-board computer) of the craft were built around the mission-proven RAD6000
RAD6000
The RAD6000 radiation-hardened single board computer, based on the IBM RISC Single Chip CPU, was manufactured by IBM Federal Systems. IBM Federal Systems was sold to Loral, and by way of acquisition, ended up with Lockheed Martin and is currently a part of BAE Systems...
avionics
Avionics
Avionics are electronic systems used on aircraft, artificial satellites and spacecraft.Avionic systems include communications, navigation, the display and management of multiple systems and the hundreds of systems that are fitted to aircraft to meet individual roles...
processors.