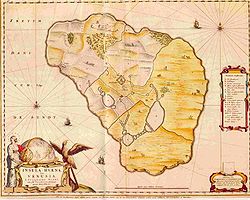 Ven is a small Swedish
Sweden
Sweden , officially the Kingdom of Sweden , is a Nordic country on the Scandinavian Peninsula in Northern Europe. Sweden borders with Norway and Finland and is connected to Denmark by a bridge-tunnel across the Öresund....
island in the Öresund strait, between Scania
Scania
Scania is the southernmost of the 25 traditional non-administrative provinces of Sweden, constituting a peninsula on the southern tip of the Scandinavian peninsula, and some adjacent islands. The modern administrative subdivision Skåne County is almost, but not totally, congruent with the...
and Zealand (Denmark
Denmark
Denmark is a Scandinavian country in Northern Europe. The countries of Denmark and Greenland, as well as the Faroe Islands, constitute the Kingdom of Denmark . It is the southernmost of the Nordic countries, southwest of Sweden and south of Norway, and bordered to the south by Germany. Denmark...
). It is situated in Landskrona Municipality
Landskrona Municipality
Landskrona Municipality is a municipality in Skåne County in Sweden. Its seat is located in the city of Landskrona.The island of Ven was added to the City of Landskrona in 1959. The amalgamations leading to the present municipality took place in 1967, 1969 and 1974...
, Skåne County
Skåne County
Skåne County is the southernmost administrative county or län, of Sweden, basically corresponding to the historical province Scania. It borders the counties of Halland, Kronoberg and Blekinge. The seat of residence for the Skåne Governor is the town of Malmö...
. The island has 371 inhabitants and an area of 7.5 sqkm. During the 1930s, the population was at its peak, with approximately 1,300 inhabitants. There are four villages on the island: Bäckviken, Tuna By, Norreborg and Kyrkbacken.

The island was historically under Danish rule, but it became Swedish in 1658, as the rest of Scania
Scania
Scania is the southernmost of the 25 traditional non-administrative provinces of Sweden, constituting a peninsula on the southern tip of the Scandinavian peninsula, and some adjacent islands. The modern administrative subdivision Skåne County is almost, but not totally, congruent with the...
was ceded to Sweden by the Treaty of Roskilde
Treaty of Roskilde
The Treaty of Roskilde was concluded on 26 February or 8 March 1658 during the Second Northern War between Frederick III of Denmark–Norway and Charles X Gustav of Sweden in the Danish city of Roskilde...
. The island was not specifically mentioned in the treaty, and according to the Danes it was not part of Scania, but of Zealand and therefore still under Danish rule. The Swedes did not agree with that interpretation, and sent troops to occupy the island on the 6th of May 1658. The transfer to Sweden was confirmed in 1660 by the Treaty of Copenhagen. The 350 years were commemorated on the island in 2010.

Astronomer Tycho Brahe
Tycho Brahe
Tycho Brahe , born Tyge Ottesen Brahe, was a Danish nobleman known for his accurate and comprehensive astronomical and planetary observations...
(1546–1601) built two observatories
Observatory
An observatory is a location used for observing terrestrial or celestial events. Astronomy, climatology/meteorology, geology, oceanography and volcanology are examples of disciplines for which observatories have been constructed...
here, Uraniborg
Uraniborg
Uranienborg was a Danish astronomical observatory operated by Tycho Brahe; built circa 1576-1580 on Hven, an island in the Øresund between Zealand and Scania, which at that time was part of Denmark. The observatory was shortly after its construction expanded with an underground facility,...
and Stjerneborg
Stjerneborg
Stjerneborg was Tycho Brahe's underground observatory next to his palace-observatory Uraniborg, located on the island of Hven in Oresund....
, built during 1576 - 1596.

There are two churches on the island of Ven. The older one, St Ibb's Church, is located at the top of a hill in the churchyard close to the west coast of the island, overlooking the Danish town of Rungsted
Rungsted
Rungsted is a neighborhood in the city of Hørsholm in the Hørsholm Municipality of Øresund, north of Copenhagen, Denmark. The center of Hørsholm is located two kilometers west of Rungsted...
. It was built in the 1200s and is a popular church for weddings. The younger church, which has been converted into a museum, is located in the middle of the island, near Uraniborg
Uraniborg
Uranienborg was a Danish astronomical observatory operated by Tycho Brahe; built circa 1576-1580 on Hven, an island in the Øresund between Zealand and Scania, which at that time was part of Denmark. The observatory was shortly after its construction expanded with an underground facility,...
, one of the two observatories built by the astronomer Tycho Brahe.

Ven has ferries to Landskrona
Landskrona
Landskrona is a locality and the seat of Landskrona Municipality, Skåne County, Sweden with 28,670 inhabitants in 2005.-History:The city of Landskrona was founded at the location of Scania's best natural harbour, as a means of King Eric of Pomerania's anti-Hanseatic policy, intended to compete...
, and, in the summer only, to Helsingborg
Helsingborg
Helsingborg is a city and the seat of Helsingborg Municipality, Skåne County, Sweden with 97,122 inhabitants in 2010. Helsingborg is the centre of an area in the Øresund region of about 320,000 inhabitants in north-west Scania, and is Sweden's closest point to Denmark, with the Danish city...
and Copenhagen
Copenhagen
Copenhagen is the capital and largest city of Denmark, with an urban population of 1,199,224 and a metropolitan population of 1,930,260 . With the completion of the transnational Øresund Bridge in 2000, Copenhagen has become the centre of the increasingly integrating Øresund Region...
. The ferries dock at Bäckviken. The island is a popular tourist place, especially in summer. It is sometimes called "The pearl of Öresund". As the earth is rich in moraine
Moraine
A moraine is any glacially formed accumulation of unconsolidated glacial debris which can occur in currently glaciated and formerly glaciated regions, such as those areas acted upon by a past glacial maximum. This debris may have been plucked off a valley floor as a glacier advanced or it may have...
, it is good for agriculture. Durum
Durum
Durum wheat or macaroni wheat is the only tetraploid species of wheat of commercial importance that is widely cultivated today...
wheat and grapes are grown here.