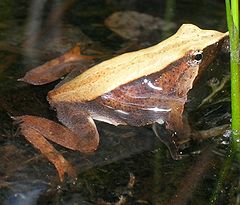 Huerquehue National Park is located in the Andes
Andes
The Andes is the world's longest continental mountain range. It is a continual range of highlands along the western coast of South America. This range is about long, about to wide , and of an average height of about .Along its length, the Andes is split into several ranges, which are separated...
, in the Valdivian temperate rainforest of the Araucanía Region
Araucanía Region
The IX Araucanía Region is one of Chile's 15 first order administrative divisions and comprises two provinces: Malleco in the north and Cautín in the south....
in southern Chile
Chile
Chile ,officially the Republic of Chile , is a country in South America occupying a long, narrow coastal strip between the Andes mountains to the east and the Pacific Ocean to the west. It borders Peru to the north, Bolivia to the northeast, Argentina to the east, and the Drake Passage in the far...
. The park encompasses 125 square kilometres of mountainous terrain east of Caburgua Lake
Caburgua Lake
Caburgua Lake is located 23 km northeast of the city of Pucón, in the Araucanía Region of Chile. Huerquehue National Park lies to the east of the lake. Like Villarrica Lake, it is part of Toltén River basin...
, and has an elevation range from 720 to 2,000 m asl.

One of the most noteworthy features of Huerquehue NP are its millenarian forests of Araucarias
Araucaria araucana
Araucaria araucana is an evergreen tree growing to tall with a trunk diameter. The tree is native to central and southern Chile, western Argentina and south Brazil. Araucaria araucana is the hardiest species in the conifer genus Araucaria...
, which are the perfect backdrop for the small lakes and ponds that dot the park. Tinquilco Lake
Tinquilco Lake
Tinquilco Lake is one of several lakes in Huerquehue National Park in the Araucanía Region in southern Chile. Located at 700 meters; it is the first lake visitors encounter in the park before continuing on the "Tres Lagos" hike.-References:*...
lies in the lower portion of this protected area.