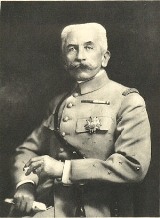 Encyclopedia
Louis Hubert Gonzalve Lyautey (17 November 1854 - 21 July 1934) was a French Army
French Army
The French Army, officially the Armée de Terre , is the land-based and largest component of the French Armed Forces.As of 2010, the army employs 123,100 regulars, 18,350 part-time reservists and 7,700 Legionnaires. All soldiers are professionals, following the suspension of conscription, voted in...
general, the first Resident-General in Morocco
Morocco
Morocco , officially the Kingdom of Morocco , is a country located in North Africa. It has a population of more than 32 million and an area of 710,850 km², and also primarily administers the disputed region of the Western Sahara...
from 1912 to 1925 and from 1921 Marshal of France
Marshal of France
The Marshal of France is a military distinction in contemporary France, not a military rank. It is granted to generals for exceptional achievements...
.

Lyautey was born at Nancy (Lorraine
Lorraine (région)
Lorraine is one of the 27 régions of France. The administrative region has two cities of equal importance, Metz and Nancy. Metz is considered to be the official capital since that is where the regional parliament is situated...
) into an upper-middle class family with aristocratic connections, royalist sympathies and a military past. In 1873 he entered the French military academy of Saint-Cyr
École Spéciale Militaire de Saint-Cyr
The École Spéciale Militaire de Saint-Cyr is the foremost French military academy. Its official name is . It is often referred to as Saint-Cyr . Its motto is "Ils s'instruisent pour vaincre": literally "They study to vanquish" or "Training for victory"...
, attended the army training school beginning in 1876, and in December 1877 was made a lieutenant. He made his career serving in the colonies and not in metropolitan France, a more prestigious assignment. The first years after graduating, Lyautey served as a cavalry officer in Algeria
Algeria
Algeria , officially the People's Democratic Republic of Algeria , also formally referred to as the Democratic and Popular Republic of Algeria, is a country in the Maghreb region of Northwest Africa with Algiers as its capital.In terms of land area, it is the largest country in Africa and the Arab...
and from 1894 to 1897 in Indochina
Indochina
The Indochinese peninsula, is a region in Southeast Asia. It lies roughly southwest of China, and east of India. The name has its origins in the French, Indochine, as a combination of the names of "China" and "India", and was adopted when French colonizers in Vietnam began expanding their territory...
, under Joseph Gallieni
Joseph Gallieni
Joseph Simon Gallieni was a French soldier, most active as a military commander and administrator in the French colonies and finished his career during the First World War. He was made Marshal of France posthumously in 1921...
.

Lyautey adopted and emulated Gallieni's policy of methodical expansion of pacified areas followed by social and economical development to bring about the end of resistance and the cooperation of former insurgents. This method became known as tache d'huile (literally, "oil stain"), as it resembles oil spots spreading to cover the whole surface. Lyautey's writings have had a significant influence on contemporary counterinsurgency theory through its adoption by David Galula
David Galula
David Galula was a French military officer and scholar who was influential in developing the theory and practice of counterinsurgency warfare.-Life and career:...
.

From 1897 to 1902 Lyautey served on Madagascar
Madagascar
The Republic of Madagascar is an island country located in the Indian Ocean off the southeastern coast of Africa...
, again under Galliéni. He played a key role in the invasion of the island (1896–1898), in which he commanded the French forces. His military skill and success in this campaign greatly contributed to his promotion to general de brigade in 1902.

Lyautey is considered to have been an apt colonial administrator. During the First World War
World War I
World War I , which was predominantly called the World War or the Great War from its occurrence until 1939, and the First World War or World War I thereafter, was a major war centred in Europe that began on 28 July 1914 and lasted until 11 November 1918...
, he continued the occupation of the country, regardless of the fact that France needed most of her resources in the struggle against the Central Powers
Central Powers
The Central Powers were one of the two warring factions in World War I , composed of the German Empire, the Austro-Hungarian Empire, the Ottoman Empire, and the Kingdom of Bulgaria...
. Lyautey served as France's Minister of War for three months in 1917. In 1925, Lyautey lost the military command of the French forces engaged against Abd-el-Krim to Philippe Pétain
Philippe Pétain
Henri Philippe Benoni Omer Joseph Pétain , generally known as Philippe Pétain or Marshal Pétain , was a French general who reached the distinction of Marshal of France, and was later Chief of State of Vichy France , from 1940 to 1944...
and resigned to return to France.


Reaction to outbreak of World War I

On 27 July 1914 Gen. Lyautey was telephoned by Paris to evacuate Protectorate except the coast and to send all troops. He was quoted as saying: "A war among Europeans is a civil war. It is the most monumental folly the world has ever committed."

Marshal Lyautey served as Honorary President of the three French Scouting associations. His château in the east of France at Thorey
Thorey
For the German village, see ThöreyThorey is a commune in the Yonne department in Burgundy in north-central France....
hosts the museum of French Scouting.


Final years and association with fascism

In his final years, Lyautey became associated with France's growing fascist movement. He admired Italian leader Benito Mussolini
Benito Mussolini
Benito Amilcare Andrea Mussolini was an Italian politician who led the National Fascist Party and is credited with being one of the key figures in the creation of Fascism....
, and was associated with the far right Croix de Feu. In 1934, he threatened to lead the Jeunesses Patriotes
Jeunesses Patriotes
The Jeunesses Patriotes were a Fascist-inspired street brawlers group of France, recruited mostly from university students and financed by industrialists founded in 1924 by Pierre Taittinger...
to overthrow the government.

Lyautey died in Thorey
Thorey
For the German village, see ThöreyThorey is a commune in the Yonne department in Burgundy in north-central France....
and was buried in Morocco, but the body was reinterred in Les Invalides
Les Invalides
Les Invalides , officially known as L'Hôtel national des Invalides , is a complex of buildings in the 7th arrondissement of Paris, France, containing museums and monuments, all relating to the military history of France, as well as a hospital and a retirement home for war veterans, the building's...
in 1961.