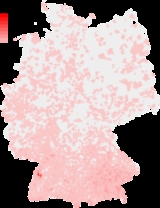 Encyclopedia
Huber is a surname of German
German language
German is a West Germanic language, related to and classified alongside English and Dutch. With an estimated 90 – 98 million native speakers, German is one of the world's major languages and is the most widely-spoken first language in the European Union....
origin. It derives from the German word Hube meaning hide
Hide (unit)
The hide was originally an amount of land sufficient to support a household, but later in Anglo-Saxon England became a unit used in assessing land for liability to "geld", or land tax. The geld would be collected at a stated rate per hide...
, a unit of land a farmer might possess. It is in the top ten most common surnames in the German-speaking world
German-speaking Europe
The German language is spoken in a number of countries and territories in West, Central and Eastern Europe...
, especially in Austria
Austria
Austria , officially the Republic of Austria , is a landlocked country of roughly 8.4 million people in Central Europe. It is bordered by the Czech Republic and Germany to the north, Slovakia and Hungary to the east, Slovenia and Italy to the south, and Switzerland and Liechtenstein to the...
and Switzerland
Switzerland
Switzerland name of one of the Swiss cantons. ; ; ; or ), in its full name the Swiss Confederation , is a federal republic consisting of 26 cantons, with Bern as the seat of the federal authorities. The country is situated in Western Europe,Or Central Europe depending on the definition....
where it is the surname of approximately 0.3% of the population.

Variants arising from varying dialectal pronunciation of the surname include Hueber, Huemer, Humer, Haumer and Huebmer and Hoover. 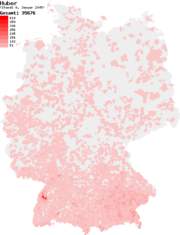