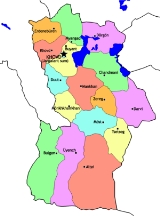 Encyclopedia
Khovd is one of the 21 aimags
Aimags of Mongolia
Mongolia is divided into 21 aimags . Each aimag is subdivided into several sums. The name aimag is derived from the Mongolian and Turkic languages word for "tribe". The modern aimags were established since 1921...
(provinces) of Mongolia
Mongolia
Mongolia is a landlocked country in East and Central Asia. It is bordered by Russia to the north and China to the south, east and west. Although Mongolia does not share a border with Kazakhstan, its western-most point is only from Kazakhstan's eastern tip. Ulan Bator, the capital and largest...
, located in the west of the country. Its capital is also named Khovd.

Khovd is approximately 1,580 km from Ulan Bator. It is considered remote even for Mongolian standards. Name is given after Khovd River located in this province.

Khovd is distinguished by its multi-cultural population. It is home to more than 17 nationalities and ethnicities. Each of these groups has its own distinct traditional dwelling and settlement pattern, dress and other cultural distinctions, literary, artistic, and musical traditions. There is a rather large minority Kazakh-Mongol population that speaks both Kazakh
Kazakh language
Kazakh is a Turkic language which belongs to the Kipchak branch of the Turkic languages, closely related to Nogai and Karakalpak....
and Mongolian
Mongolian language
The Mongolian language is the official language of Mongolia and the best-known member of the Mongolic language family. The number of speakers across all its dialects may be 5.2 million, including the vast majority of the residents of Mongolia and many of the Mongolian residents of the Inner...
.

The Khovd Airport
Khovd Airport
Khovd Airport is a public airport located in Khovd city, Mongolia.- Airlines :- External links :* Khovd* Khovd...
(HVD/ZMKD) has two runways, one of which is paved, and gets served by regular flights from and to Ulan Bator, Mörön, and Bulgan
Bulgan (city)
Bulgan is a town, administrative centre of Bulgan province of Mongolia. Bulgan sum has a population of 11,984 , 12,323, town proper has a population of 11,198...

The region around the city is famous in Mongolia for its watermelon crop.

There is a sizable hydroelectric dambuilding project underway that will theoretically generate enough electricity to power the three most western aimags (Uvs
Uvs Province
Uvs is one of the 21 aimags of Mongolia. It is located in the west of the country, 1336 km away from the national capital Ulaanbaatar.Its capital is Ulaangom which lies 936m above the Sea level....
, Bayan-Ölgii, and Khovd). Currently, the city of Khovd is connected to the Russian power grid and subject to blackouts if it falls behind in its payments. 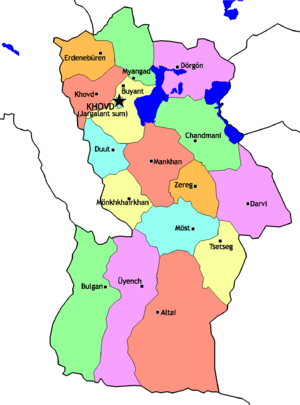