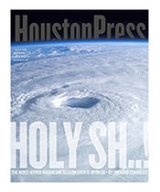 Encyclopedia
The Houston Press is an alternative weekly
Alternative weekly
An alternative newspaper is a type of newspaper, that eschews comprehensive coverage of general news in favor of stylized reporting, opinionated reviews and columns, investigations into edgy topics and magazine-style feature stories highlighting local people and culture. Their news coverage is more...
newspaper
Newspaper
A newspaper is a scheduled publication containing news of current events, informative articles, diverse features and advertising. It usually is printed on relatively inexpensive, low-grade paper such as newsprint. By 2007, there were 6580 daily newspapers in the world selling 395 million copies a...
published in Houston, Texas
Texas
Texas is the second largest U.S. state by both area and population, and the largest state by area in the contiguous United States.The name, based on the Caddo word "Tejas" meaning "friends" or "allies", was applied by the Spanish to the Caddo themselves and to the region of their settlement in...
, United States
United States
The United States of America is a federal constitutional republic comprising fifty states and a federal district...
. It is headquartered in Downtown Houston
Downtown Houston
Downtown Houston is the largest business district of Houston, Texas, United States. Downtown Houston, the city's central business district, contains the headquarters of many prominent companies. There is an extensive network of pedestrian tunnels and skywalks connecting the buildings of the district...
.

The paper, a part of the Village Voice Media group, is supported entirely by advertising
Advertising
Advertising is a form of communication used to persuade an audience to take some action with respect to products, ideas, or services. Most commonly, the desired result is to drive consumer behavior with respect to a commercial offering, although political and ideological advertising is also common...
revenue and is free to readers. The newspaper draws a weekly readership of more than 300,000, verified by an independent media audit and referenced on its website. The Press can be found in restaurants, coffee houses, and local retail stores. New weekly editions are distributed on Thursdays.


The paper includes sections devoted to


Awards from the Association of Alternative Newsweeklies