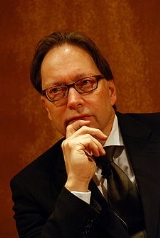 Engdahl was born in Karlskrona
Karlskrona
Karlskrona is a locality and the seat of Karlskrona Municipality, Blekinge County, Sweden with 35,212 inhabitants in 2010. It is also the capital of Blekinge County. Karlskrona is known as Sweden's only baroque city and is host to Sweden's only remaining naval base and the headquarters of the...
, Blekinge
Blekinge
' is one of the traditional provinces of Sweden , situated in the south of the country. It borders Småland, Scania and the Baltic Sea.The name "Blekinge" comes from the adjective bleke, which corresponds to the nautical term for "dead calm"....
. He earned his B.A. in 1970 at Stockholm University
Stockholm University
Stockholm University is a state university in Stockholm, Sweden. It has over 28,000 students at four faculties, making it one of the largest universities in Scandinavia. The institution is also frequently regarded as one of the top 100 universities in the world...
; he earned his doctoral degree (fil. dr.
Ph.D.
A Ph.D. is a Doctor of Philosophy, an academic degree.Ph.D. may also refer to:* Ph.D. , a 1980s British group*Piled Higher and Deeper, a web comic strip*PhD: Phantasy Degree, a Korean comic series* PhD Docbook renderer, an XML renderer...
) in 1987, with a study on Swedish romanticism
Romanticism
Romanticism was an artistic, literary and intellectual movement that originated in the second half of the 18th century in Europe, and gained strength in reaction to the Industrial Revolution...
, but had meanwhile been active as a literary critic, translator and journal editor, and was one of the introducers of the continental tradition of literary scholarship in Sweden. He is currently adjunct professor of Scandinavian literature
Scandinavian literature
Scandinavia literature or Nordic literature is the literature in the languages of the Nordic countries of Northern Europe. The Nordic countries include Denmark, Finland, Iceland, Norway , Sweden and associated autonomous territories .The majority of these nations and regions use North Germanic...
at the University of Aarhus
University of Aarhus
Aarhus University , located in the city of Aarhus, Denmark, is Denmark's second oldest and second largest university...
in Denmark
Denmark
Denmark is a Scandinavian country in Northern Europe. The countries of Denmark and Greenland, as well as the Faroe Islands, constitute the Kingdom of Denmark . It is the southernmost of the Nordic countries, southwest of Sweden and south of Norway, and bordered to the south by Germany. Denmark...
. He speaks Swedish
Swedish language
Swedish is a North Germanic language, spoken by approximately 10 million people, predominantly in Sweden and parts of Finland, especially along its coast and on the Åland islands. It is largely mutually intelligible with Norwegian and Danish...
, English
English language
English is a West Germanic language that arose in the Anglo-Saxon kingdoms of England and spread into what was to become south-east Scotland under the influence of the Anglian medieval kingdom of Northumbria...
, German
German language
German is a West Germanic language, related to and classified alongside English and Dutch. With an estimated 90 – 98 million native speakers, German is one of the world's major languages and is the most widely-spoken first language in the European Union....
, French
French language
French is a Romance language spoken as a first language in France, the Romandy region in Switzerland, Wallonia and Brussels in Belgium, Monaco, the regions of Quebec and Acadia in Canada, and by various communities elsewhere. Second-language speakers of French are distributed throughout many parts...
and Russian
Russian language
Russian is a Slavic language used primarily in Russia, Belarus, Uzbekistan, Kazakhstan, Tajikistan and Kyrgyzstan. It is an unofficial but widely spoken language in Ukraine, Moldova, Latvia, Turkmenistan and Estonia and, to a lesser extent, the other countries that were once constituent republics...
fluently.

On October 16, 1997, Engdahl became a member of the Swedish Academy
Swedish Academy
The Swedish Academy , founded in 1786 by King Gustav III, is one of the Royal Academies of Sweden.-History:The Swedish Academy was founded in 1786 by King Gustav III. Modelled after the Académie française, it has 18 members. The motto of the Academy is "Talent and Taste"...
, elected to seat number 17 vacated by the death of Johannes Edfelt
Johannes Edfelt
Bo Johannes Edfelt , was a Swedish writer, poet, translator and literary critic.A native of Tibro, Edfelt was elected to be a member of the Swedish Academy in 1969, occupying seat No. 17...
; on June 1, 1999, he succeeded Sture Allén
Sture Allén
Sture Allén is a Swedish retired professor of computational linguistics at the University of Gothenburg, who was the permanent secretary of the Swedish Academy between 1986 and 1999. He was elected to chair 3 of the Swedish Academy in 1980. He is a member of the Norwegian Academy of Science and...
as the Academy's permanent secretary, i.e. its executive member and spokesperson. As such, he has the annual task of announcing the recipient of the Nobel prize in literature
Nobel Prize in Literature
Since 1901, the Nobel Prize in Literature has been awarded annually to an author from any country who has, in the words from the will of Alfred Nobel, produced "in the field of literature the most outstanding work in an ideal direction"...
to the public. On December 20, 2008 it was announced that Engdahl after ten years will step down as the Academy's permanent secretary on June 1, 2009.

He is married to Ebba Witt-Brattström
Ebba Witt-Brattström
Ebba Witt-Brattström is a Swedish scholar in comparative literature. She is Professor of Literature and head of department at Södertörn University outside Stockholm, and a well-known feminist...
, professor of literature at Södertörn University outside Stockholm
Stockholm
Stockholm is the capital and the largest city of Sweden and constitutes the most populated urban area in Scandinavia. Stockholm is the most populous city in Sweden, with a population of 851,155 in the municipality , 1.37 million in the urban area , and around 2.1 million in the metropolitan area...
. Together they have three sons.

In October 2008, Engdahl told the Associated Press
Associated Press
The Associated Press is an American news agency. The AP is a cooperative owned by its contributing newspapers, radio and television stations in the United States, which both contribute stories to the AP and use material written by its staff journalists...
that the United States
United States
The United States of America is a federal constitutional republic comprising fifty states and a federal district...
is "too insular and ignorant to challenge Europe as the center of the literary world" and does not really "participate in the big dialogue of literature." His comments generated controversy across the Atlantic, with the head of the U.S. National Book Foundation
National Book Foundation
The National Book Foundation, founded in 1989, is an American nonprofit literary organization established "to raise the cultural appreciation of great writing in America." It achieves this through sponsoring the National Book Award, as well as the medal for Distinguished Contribution to American...
offering to send him a reading list. Engdahl was reported "very surprised" that the American reaction was "so violent". He did not think that what he said was "that derogatory or sensational" and conceded his comments may have been "perhaps a bit too generalizing". 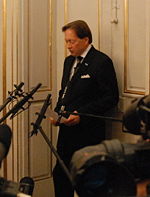