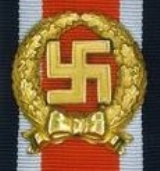 Encyclopedia
The Honour Roll Clasp of the Army or Ehrenblatt des Heeres (German) was a Decoration of Nazi Germany
Nazi Germany
Nazi Germany , also known as the Third Reich , but officially called German Reich from 1933 to 1943 and Greater German Reich from 26 June 1943 onward, is the name commonly used to refer to the state of Germany from 1933 to 1945, when it was a totalitarian dictatorship ruled by...
during World War II
World War II
World War II, or the Second World War , was a global conflict lasting from 1939 to 1945, involving most of the world's nations—including all of the great powers—eventually forming two opposing military alliances: the Allies and the Axis...
. The total number awarded was 4,556.

The Honour Roll Clasp of the Army was instituted after the German invasion of the Soviet Union
Soviet Union
The Soviet Union , officially the Union of Soviet Socialist Republics , was a constitutionally socialist state that existed in Eurasia between 1922 and 1991....
in 1941. Until 30 January 1944, it was only a paper award. After this date, Adolf Hitler
Adolf Hitler
Adolf Hitler was an Austrian-born German politician and the leader of the National Socialist German Workers Party , commonly referred to as the Nazi Party). He was Chancellor of Germany from 1933 to 1945, and head of state from 1934 to 1945...
introduced the metallic version of the award for the decoration.

There were a number of possible qualifications for the Honour Roll Clasp of the Army:

There were no specific qualifications to earn this award; its bestowing was at the discretion of the German High Command. It was, however, awarded very sparingly, and so did retain a high level of prestige and honor.

The awarding of the Honour Roll Clasp of the Army took place in three Steps:

The Waffen SS were not nominally part of the German Army, but were nevertheless eligible on the same conditions as the Army.

The decoration contained a wreath measuring 24.5 mm across, formed of six bunches of Oak Leaves on each side.
The width of the wreath was 5 mm at the widest point and tapered to the apex where two oak leaves meet tip-to-tip.
The height of the badge from base to tip was 26 mm.
The swastika was superimposed upon the separately-made wreath and was soldered onto the wreath assembly.

The reverse side had four pins for attachment to allow securing to a strip of Iron Cross Second Class ribbon. This ribbon was then looped through the second button hole on the tunic of the recipient.
The source of this article is wikipedia, the free encyclopedia.  The text of this article is licensed under the GFDL.