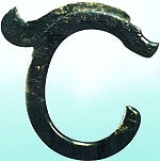 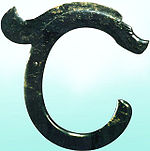 The Hongshan culture was a Neolithic
Neolithic
The Neolithic Age, Era, or Period, or New Stone Age, was a period in the development of human technology, beginning about 9500 BC in some parts of the Middle East, and later in other parts of the world. It is traditionally considered as the last part of the Stone Age...
culture in northeastern China
China
Chinese civilization may refer to:* China for more general discussion of the country.* Chinese culture* Greater China, the transnational community of ethnic Chinese.* History of China* Sinosphere, the area historically affected by Chinese culture...
. Hongshan sites have been found in an area stretching from Inner Mongolia
Inner Mongolia
Inner Mongolia is an autonomous region of the People's Republic of China, located in the northern region of the country. Inner Mongolia shares an international border with the countries of Mongolia and the Russian Federation...
to Liaoning
Liaoning
' is a province of the People's Republic of China, located in the northeast of the country. Its one-character abbreviation is "辽" , a name taken from the Liao River that flows through the province. "Níng" means "peace"...
, and dated from about 4700 BC to 2900 BC.

The culture is named after Hongshanhou , a site in Hongshan District, Hongshan District, Chifeng
Chifeng
Chifeng , also known as Ulanhad, is a prefecture-level city in southeastern Inner Mongolia, People's Republic of China. It borders Xilin Gol to the north and west, Tongliao to the northeast, Chaoyang prefecture of Liaoning province to the southeast, and Chengde prefecture of Hebei province to the...
. The Hongshanhou site was discovered by the Japanese archaeologist Torii Ryūzō
Torii Ryuzo
was a Japanese ethnologist, anthropologist and folklorist. He was known for his anthropological investigation in Taiwan and also conducted archaeological excavations and attempted to understand prehistoric Northeast Asia.-Life:...
in 1908 and extensively excavated in 1935 by Kōsaku Hamada
Kōsaku Hamada
, also known as Seiryō Hamada, was a Japanese academic, archaeologist, author and President of Kyoto University.-Early life:Hamada was born in Osaka...
and Mizuno Seiichi.

Hongshan burial artifacts include some of the earliest known examples of jade
Jade
Jade is an ornamental stone.The term jade is applied to two different metamorphic rocks that are made up of different silicate minerals:...
working. The Hongshan culture is known for its jade pig dragon
Pig dragon
A pig dragon or zhulong is a type of jade artifact from neolithic China. Zhulong are zoomorphic forms with a pig-like head and elongated limbless body coiled around to the head and described as "suggestively fetal"...
s and embryo dragons. Clay figurines, including figurines of pregnant women, are also found throughout Hongshan sites.

Excavators have discovered an underground temple
Temple
A temple is a structure reserved for religious or spiritual activities, such as prayer and sacrifice, or analogous rites. A templum constituted a sacred precinct as defined by a priest, or augur. It has the same root as the word "template," a plan in preparation of the building that was marked out...
complex -- which included an altar
Altar
An altar is any structure upon which offerings such as sacrifices are made for religious purposes. Altars are usually found at shrines, and they can be located in temples, churches and other places of worship...
-- and also cairn
Cairn
Cairn is a term used mainly in the English-speaking world for a man-made pile of stones. It comes from the or . Cairns are found all over the world in uplands, on moorland, on mountaintops, near waterways and on sea cliffs, and also in barren desert and tundra areas...
s in Niuheliang
Niuheliang
Niuheliang is a Neolithic archaeological site in China, located in the northeastern province of Liaoning in Manchuria along the middle and upper reaches of the Laoha River and the Yingjin River. Discovered in 1983, Niuheliang is an exemplary site of the Hongshan culture...
. The temple was constructed of stone platforms, with painted walls. Archaeologists have given it the name Goddess Temple due to the discovery of a clay female head with jade
Jade
Jade is an ornamental stone.The term jade is applied to two different metamorphic rocks that are made up of different silicate minerals:...
inlaid eyes. It was an underground structure, 1m deep. Included on its walls are mural paintings.

Housed inside the Goddess Temple are clay figurine
Figurine
A figurine is a statuette that represents a human, deity or animal. Figurines may be realistic or iconic, depending on the skill and intention of the creator. The earliest were made of stone or clay...
s as large as three times the size of real-life humans. The exceedingly large figurines are possibly deities
Deity
A deity is a recognized preternatural or supernatural immortal being, who may be thought of as holy, divine, or sacred, held in high regard, and respected by believers....
, but for a religion
Religion
Religion is a collection of cultural systems, belief systems, and worldviews that establishes symbols that relate humanity to spirituality and, sometimes, to moral values. Many religions have narratives, symbols, traditions and sacred histories that are intended to give meaning to life or to...
not reflective in any other Chinese culture.

The existence of complex trading networks and monumental architecture (such as pyramid
Pyramid
A pyramid is a structure whose outer surfaces are triangular and converge at a single point. The base of a pyramid can be trilateral, quadrilateral, or any polygon shape, meaning that a pyramid has at least three triangular surfaces...
s and the Goddess Temple) point to the existence of a "chiefdom
Chiefdom
A chiefdom is a political economy that organizes regional populations through a hierarchy of the chief.In anthropological theory, one model of human social development rooted in ideas of cultural evolution describes a chiefdom as a form of social organization more complex than a tribe or a band...
" in these prehistoric
Prehistory
Prehistory is the span of time before recorded history. Prehistory can refer to the period of human existence before the availability of those written records with which recorded history begins. More broadly, it refers to all the time preceding human existence and the invention of writing...
communies.

Painted pottery
Pottery
Pottery is the material from which the potteryware is made, of which major types include earthenware, stoneware and porcelain. The place where such wares are made is also called a pottery . Pottery also refers to the art or craft of the potter or the manufacture of pottery...
was also discovered within the temple. Over 60 nearby tomb
Tomb
A tomb is a repository for the remains of the dead. It is generally any structurally enclosed interment space or burial chamber, of varying sizes...
s have been unearthed, all constructed of stone and covered by stone mounds, frequently including jade
Jade
Jade is an ornamental stone.The term jade is applied to two different metamorphic rocks that are made up of different silicate minerals:...
artifacts.

Cairn
Cairn
Cairn is a term used mainly in the English-speaking world for a man-made pile of stones. It comes from the or . Cairns are found all over the world in uplands, on moorland, on mountaintops, near waterways and on sea cliffs, and also in barren desert and tundra areas...
s were discovered atop two nearby two hills, with either round or square stepped tombs, made of piled limestone. Entombed inside were sculptures of dragon
Chinese dragon
Chinese dragons are legendary creatures in Chinese mythology and folklore, with mythic counterparts among Japanese, Korean, Vietnamese, Bhutanese, Western and Turkic dragons. In Chinese art, dragons are typically portrayed as long, scaled, serpentine creatures with four legs...
s and tortoise
Tortoise
Tortoises are a family of land-dwelling reptiles of the order of turtles . Like their marine cousins, the sea turtles, tortoises are shielded from predators by a shell. The top part of the shell is the carapace, the underside is the plastron, and the two are connected by the bridge. The tortoise...
s.

It has been suggested that religious sacrifice might have been performed within the Hongshan culture.

Just as suggested by evidence found at early Yangshao culture
Yangshao culture
The Yangshao culture was a Neolithic culture that existed extensively along the central Yellow River in China. The Yangshao culture is dated from around 5000 BC to 3000 BC. The culture is named after Yangshao, the first excavated representative village of this culture, which was discovered in 1921...
sites, Hongshan culture sites also provide the earliest evidence for Feng shui
Feng shui
Feng shui ' is a Chinese system of geomancy believed to use the laws of both Heaven and Earth to help one improve life by receiving positive qi. The original designation for the discipline is Kan Yu ....
. The presence of both round and square shapes at Hongshan culture ceremonial centers suggests an early presence of the gaitian cosmography (heaven-round, earth-square).

Early Feng shui
Feng shui
Feng shui ' is a Chinese system of geomancy believed to use the laws of both Heaven and Earth to help one improve life by receiving positive qi. The original designation for the discipline is Kan Yu ....
relied on astronomy to find correlations between humans and the universe.


Relationship with other cultures

Some Chinese archaeologists such as Guo Da-shun, sees the Hongshan culture as an important stage of early Chinese civilization. Whatever the linguistic affinity of the ancient denizens, Hongshan culture is believed to have exerted an influence on the development of early Chinese civilization, and may also have contributed to the development of settlements in ancient Korea.