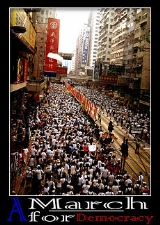 The day is customarily marked by an officially organised extravagant fireworks display in the evening, and is also the platform for political rallies demanding universal suffrage. In 2007, to commemorate the 10th Anniversary celebration the Hong Kong Government published a song, "Just Because You Are Here" . It was sung by many Hong Kong singers and composed by Peter Kam (金培達) with lyric by Keith Chan (陳少琪).

On 1 July of each year since the 1997 handover, a march is led by the Civil Human Rights Front
Civil Human Rights Front
Civil Human Rights Front or CHRF is an organization that focuses on the issues of Hong Kong politics and livelihood, affiliates almost all the pan-democratic camps in Hong Kong. Forty-eight NGOs and political groups have been involved in the organization as of January 2006...
. It has become the annual platform for demanding universal suffrage, calling for observance and preservation civil liberties
Civil liberties
Civil liberties are rights and freedoms that provide an individual specific rights such as the freedom from slavery and forced labour, freedom from torture and death, the right to liberty and security, right to a fair trial, the right to defend one's self, the right to own and bear arms, the right...
such as free speech
Freedom of speech
Freedom of speech is the freedom to speak freely without censorship. The term freedom of expression is sometimes used synonymously, but includes any act of seeking, receiving and imparting information or ideas, regardless of the medium used...
, venting dissatisfaction with the Hong Kong Government or the Chief Executive, rallying against actions of the Pro-Beijing camp.

However, it was only in 2003 when it drew large public attention by opposing the bill to enact the Hong Kong Basic Law Article 23
Hong Kong Basic Law Article 23
Hong Kong Basic Law Article 23 is the basis of a security law proposed by the Government of Hong Kong. It states:On 24 September 2002 the government released its proposals for the anti-subversion law. It is the cause of considerable controversy and division in Hong Kong, which operates as a...
. Most notably, in 2003, the HKSAR Government proposed to implement Article 23 of the Basic Law. However, fears that by legislating against acts such as treason
Treason
In law, treason is the crime that covers some of the more extreme acts against one's sovereign or nation. Historically, treason also covered the murder of specific social superiors, such as the murder of a husband by his wife. Treason against the king was known as high treason and treason against a...
, subversion, secession
Secession
Secession is the act of withdrawing from an organization, union, or especially a political entity. Threats of secession also can be a strategy for achieving more limited goals.-Secession theory:...
and sedition
Sedition
In law, sedition is overt conduct, such as speech and organization, that is deemed by the legal authority to tend toward insurrection against the established order. Sedition often includes subversion of a constitution and incitement of discontent to lawful authority. Sedition may include any...
, the legislation would infringe human rights by adopting the mainland's concept of "national security" into the HKSAR. Together with the general dissatisfaction with the Tung administration, about 500,000 people participated in this protest. Article 23 enactment was "temporarily suspended"

Hong Kong's territory was acquired by United Kingdom from China through three separate treaties: the Treaty of Nanking
Treaty of Nanking
The Treaty of Nanking was signed on 29 August 1842 to mark the end of the First Opium War between the United Kingdom of Great Britain and Ireland and the Qing Dynasty of China...
in 1842, the Treaty of Beijing in 1860, and The Convention for the Extension of Hong Kong Territory in 1898, which gave the UK the control of Hong Kong Island
Hong Kong Island
Hong Kong Island is an island in the southern part of the Hong Kong Special Administrative Region. It has a population of 1,289,500 and its population density is 16,390/km², as of 2008...
, Kowloon
Kowloon
Kowloon is an urban area in Hong Kong comprising the Kowloon Peninsula and New Kowloon. It is bordered by the Lei Yue Mun strait in the east, Mei Foo Sun Chuen and Stonecutter's Island in the west, Tate's Cairn and Lion Rock in the north, and Victoria Harbour in the south. It had a population of...
(area south of Boundary Street
Boundary Street
[[Image:Boundary st hongkong.JPG|thumb|right|250px|Boundary Street near [[Kowloon Tong]]Boundary Street is a three-lane one-way street in [[Kowloon]], [[Hong Kong]]...
), and the New Territories
New Territories
New Territories is one of the three main regions of Hong Kong, alongside Hong Kong Island and the Kowloon Peninsula. It makes up 86.2% of Hong Kong's territory. Historically, it is the region described in The Convention for the Extension of Hong Kong Territory...
(area north of Boundary Street and south of the Shenzhen River, and outlying islands), respectively. Although Hong Kong Island and Kowloon had been ceded to the United Kingdom in perpetuity, the control on the New Territories was a 99-year lease.

The Sino-British Joint Declaration was signed by the Prime Ministers of the People's Republic of China and the United Kingdom governments on 19 December 1984 in Beijing. The Declaration entered into force with the exchange of instruments of ratification on 27 May 1985. In the Joint Declaration, the PRC Government stated that it had decided to resume the exercise of sovereignty over Hong Kong (including Hong Kong Island, Kowloon]], and the New Territories) with effect from 1 July 1997, and the UK Government declared that it would restore Hong Kong to the PRC with effect from 1 July 1997. In the document the PRC Government also declared its basic policies regarding Hong Kong.


Origins of the holiday, controversy

The bill gave legal existence of 1 and 2 July as public holidays in 1997 in addition to the then current holidays under the Holidays Ordinance (Cap 149). The bill's purpose was to ensure both are paid holidays in the absence of a functioning government during the handover.
The source of this article is wikipedia, the free encyclopedia.  The text of this article is licensed under the GFDL.