Encyclopedia
Hong Kong Heritage Museum is a museum
Museum
A museum is an institution that cares for a collection of artifacts and other objects of scientific, artistic, cultural, or historical importance and makes them available for public viewing through exhibits that may be permanent or temporary. Most large museums are located in major cities...
of history
History
History is the discovery, collection, organization, and presentation of information about past events. History can also mean the period of time after writing was invented. Scholars who write about history are called historians...
, art
Art
Art is the product or process of deliberately arranging items in a way that influences and affects one or more of the senses, emotions, and intellect....
and culture
Culture
Culture is a term that has many different inter-related meanings. For example, in 1952, Alfred Kroeber and Clyde Kluckhohn compiled a list of 164 definitions of "culture" in Culture: A Critical Review of Concepts and Definitions...
in Sha Tin
Sha Tin
Sha Tin, also spelled Shatin, is an area around the Shing Mun River in the New Territories of Hong Kong. Administratively, it is part of the Sha Tin District.-Geography:...
, Hong Kong
Hong Kong
Hong Kong is one of two Special Administrative Regions of the People's Republic of China , the other being Macau. A city-state situated on China's south coast and enclosed by the Pearl River Delta and South China Sea, it is renowned for its expansive skyline and deep natural harbour...
, by the Shing Mun River
Shing Mun River
Shing Mun River, or Shing Mun River Channel, is a river in Sha Tin, Hong Kong.-History:The original Shing Mun River began at Needle Hill, and flowed into the former Tide Cove , a shallow bay. In the 1970s, Tide Cove was drained and turned to Sha Tin New Town...
. The museum opened on 16 December 2000. It is managed by the Leisure and Cultural Services Department
Leisure and Cultural Services Department
The Leisure and Cultural Services Department , often abbreviated as LCSD, is a department in the Government of Hong Kong. It reports to the Home Affairs Bureau, headed by the Secretary for Home Affairs. It provides leisure and cultural activities for the people of Hong Kong, which was also one of...
of the Hong Kong Government. The six permanent exhibits and the original temporary exhibits were designed by design firm Reich+Petch along with Lord Cultural Resources.

The Museum has been designed to provide comprehensive exhibitions on history, art and culture. The Museum offers a diverse range of dynamic and interactive exhibitions and programmes to engage visitors in enjoyable and educational experiences as they appreciate the valuable artefacts on display. It also houses a cafe and museum shop.

There are six permanent exhibition galleries
Art gallery
An art gallery or art museum is a building or space for the exhibition of art, usually visual art.Museums can be public or private, but what distinguishes a museum is the ownership of a collection...
for the display of the museum's collections and six thematic galleries for temporary exhibitions. Permanent galleries include:

Other than gallaries, the museum has a theatre for various performing arts and talks. 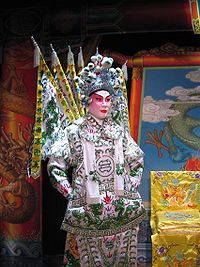 The museum is served by numerous bus lines. It is also reachable by MTR
MTR
Mass Transit Railway is the rapid transit railway system in Hong Kong. Originally opened in 1979, the system now includes 211.6 km of rail with 155 stations, including 86 railway stations and 69 light rail stops...
: