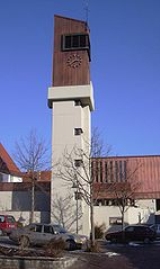 Encyclopedia
Holzmaden is a town in Baden-Württemberg
Baden-Württemberg
Baden-Württemberg is one of the 16 states of Germany. Baden-Württemberg is in the southwestern part of the country to the east of the Upper Rhine, and is the third largest in both area and population of Germany's sixteen states, with an area of and 10.7 million inhabitants...
, Germany
Germany
Germany , officially the Federal Republic of Germany , is a federal parliamentary republic in Europe. The country consists of 16 states while the capital and largest city is Berlin. Germany covers an area of 357,021 km2 and has a largely temperate seasonal climate...
that lies between Stuttgart
Stuttgart
Stuttgart is the capital of the state of Baden-Württemberg in southern Germany. The sixth-largest city in Germany, Stuttgart has a population of 600,038 while the metropolitan area has a population of 5.3 million ....
and Ulm
Ulm
Ulm is a city in the federal German state of Baden-Württemberg, situated on the River Danube. The city, whose population is estimated at 120,000 , forms an urban district of its own and is the administrative seat of the Alb-Donau district. Ulm, founded around 850, is rich in history and...
.

The ground in and around the city contains rich layers of well preserved fossils (or Lagerstätten) of the Jurassic
Jurassic
The Jurassic is a geologic period and system that extends from about Mya to  Mya, that is, from the end of the Triassic to the beginning of the Cretaceous. The Jurassic constitutes the middle period of the Mesozoic era, also known as the age of reptiles. The start of the period is marked by...
period. The fossils are found in the 160 million year old Posidonia Shale
Posidonia Shale
The Posidonia Shale is a Lower Jurassic geological formation famous for its exceptionally well-preserved complete skeletons of fossil marine fish and reptiles. The Posidonienschiefer as German paleontologists call it, takes its name from the ubiquitous fossils of Posidonia bronni that characterize...
and displayed in the local Museum Hauff as well as museums around the world. This fossil locale is important for its examples of skin cover showing parts of the animal rarely found.