Encyclopedia
Naval Station Holmen is one of several naval stations of the Royal Danish Navy
Royal Danish Navy
The Royal Danish Navy is the sea-based branch of the Danish Defence force. The RDN is mainly responsible for maritime defence and maintaining the sovereignty of Danish, Greenlandic and Faroese territorial waters...
, supplementing the two Danish naval bases in Frederikshavn
Frederikshavn
This article is about a Danish town. For the German town, see Friedrichshafen, and for the Finnish town, see Fredrikshamn .Frederikshavn is a Danish town in Frederikshavn municipality, Region Nordjylland on the northeast coast of the Jutland peninsula in northern Denmark. Its name translates to...
and Korsør
Korsør
Korsør is a Danish town and port. It is out on the Great Belt, on the Zealand side, just south of where the Great Belt Bridge lands. It was the site of the municipal council of Korsør municipality - today it is part of Slagelse municipality...
.

Founded in the late 17th century it is also a visitor attraction with many historical buildings that has played a vital role in the history of Denmark as well as Copenhagen.

The naval base used to occupy the entire area of Holmen
Holmen, Copenhagen
Holmen is an area in central Copenhagen, Denmark. In spite of its name, deceptively in singular, Holmen is a congregation of small islands, forming a north-eastern extension of Christianshavn between Zealand and the northern tip of Amager....
, which was in fact created by a series of landfills to house it, but is now confined to its northernmost island of Nyholm.

Holmen was for many years the base of command for the Danish Naval Flag and has through the times been called Nyholm (which is the name of one of the islands), the Navy’s Base and Naval Station or Naval Base, Copenhagen. It was never actually named Naval Station Holmen (Flådestation Holmen), even though many people not in the Navy have used this name. For over 300 years, Holmen was Denmark’s largest employer. Today the Navy only has a single institution left on Holmen. SInce the 1990s, the area has been opened to the public. 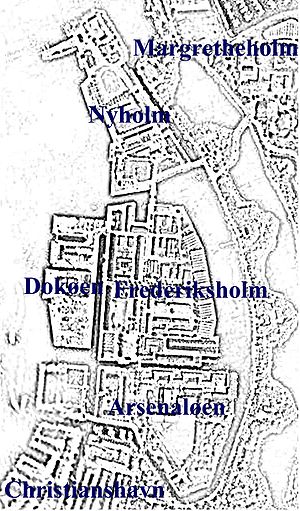 Erik Menved
Eric VI of Denmark
Eric VI Menved was King of Denmark and a son of Eric V and Agnes of Brandenburg.He became king in 1286 at age 12, when his father was murdered 20 November by unknown assailants...
was the first Danish king to establish a naval port in Copenhagen. Later the fleet, under the command of Valdemar Atterdag was moved to Vordingborg
Vordingborg
Vordingborg is a municipality in Region Sjælland on the southeast coast of the island of Zealand in south Denmark. The municipality includes the island of Masnedø, and covers an area of 621 km². It has a total population of 46,600...
, but Erik of Pommern  moved the fleet back to Copenhagen and King Hans built a shipyard in Copenhagen.

Christian IV of Denmark
Christian IV of Denmark
Christian IV was the king of Denmark-Norway from 1588 until his death. With a reign of more than 59 years, he is the longest-reigning monarch of Denmark, and he is frequently remembered as one of the most popular, ambitious and proactive Danish kings, having initiated many reforms and projects...
built a “war port” on Slotsholmen
Slotsholmen
Slotsholmen is an island in the harbour of Copenhagen, Denmark, and part of Copenhagen Inner City. Bishop Absalon constructed the city's first castle on the island in 1166-67 at the site where Christiansborg Palace, the seat of the Danish Parliament lies today...
, but the harbor’s basin has been filled since and today is the site of the Royal Library
Royal Library
Royal Library can mean:*Royal Library, Windsor - the royal library of the Sovereign of the United Kingdom*Danish Royal Library - the national library of Denmark*Dutch Royal Library - the national library of The Netherlands...
. The buildings around the harbor housed supplies for the Navy. As ships started to grow in size, the war port became too small, and the fleet moved to Bremerholm.

Under Christian the 6th, a dock was established in 1739 at Christianshavn
Christianshavn
Christianshavn is an artificial island neighbourhood located in Copenhagen, Denmark. It was founded in the early 17th century by Christian IV as part of his extension of the fortifications of Copenhagen. Originally it was laid out as an independent privileged merchant's town with inspiration from...
, close to where Strandgade (Beach Street) is today. This dock existed up to 1871, when is was taken over by Copenhagen’s Harbor Control, and the docks were filled. The name Gammel Dok (Old Docks) still show where part of the Navy’s shipyard was.

Since the city was growing, it was not practical to have the Navy Fleet stationed in the center of the city. The ships were of course built out of wood and were fire hazards. The seamen on the ships simply threw their waste and trash directly into the harbor, which had a negative impact on the city’s health.

In 1680, a plan was made to move the fleet out of the city. Responsibility for the plan was given to Admiral Niels Juel
Niels Juel
Niels Juel was a Dano–Norwegian admiral. He was the brother of the diplomat Jens Juel.-Biography:Niels Juel was born the son of Erik Juel and Sophie Clausdatter Sehested, both were descendant of Danish nobility, who lived in Jutland where the father had a career as a local functionary and judge...
. West of a sand bank called Revshalen, old ships were scuttled after being filled with stones. In 1685, a defense wall with seven bastions was built. The bastions still exist today, and in Carls and Wilhems Bastion, one can still see the original black powder depots. These depots are Holmen’s oldest buildings, built in 1688 and 1690. The northern bastion was Charlotte Amalies Bastion, and north of this two cannon batteries were established, “Batteriet Quintus” and “Batteriet Neptunus”. The latter's name came from the sunken ship which was the foundation for the battery. This battery was later renamed to “Christiani Sixti Batteri”, or “Christian the Sixth’s Battery”, but is known today as “Batteriet Sixtus” or just “Sixtus”. The sinking of ships continued, filled with mud from the harbor and the trash from Copenhagen’s streets. In certain streets, there was over a meter of trash, so there was plenty to take. This is how the island, which was given the name Nyholm was created.

On Nyholm, the foundation for a new shipyard was created. The first ship which was set to sea from this shipyard was Dannebrog
HDMY Dannebrog (A540)
-Features & History:Her Danish Majesty's Yacht Dannebrog was launched by Queen Alexandrine at Copenhagen in 1931, and commissioned on 26 May 1932. The yacht now serves as the official and private residence for HM The Queen of Denmark, HRH the Prince Consort, and members of the Royal Family when...
in 1692. This ship was blown up on October the 4th, 1710, in a battle against the Swedes in Køge Bugt. Afterwards, the constructions of all large ships was moved to Nyholm, and on Gammelholm, only smaller ships were built.

After 1692, several ships were built on Nyholm and in 1750, for the first time a Danish king, Frederik the 5th, was wearing a naval uniform in connection with the christening of a new ship. In 1807, the English destroyed three ships within the shipyard at Nyholm, but even though these were poor times for the Navy, ship construction continued at Nyholm. The last ship to be launched from Nyholm was in 1918, after which ship construction and several other operations were moved to Frederiksholm, which was to the south. The shipyard was separated from the Navy and became a civilian operation with its own director.

Holmen’s southern most island is Arsenaløen, or Arsenal Island.

While development on Nyholm was continuing, a little island by the name of Motzmanns Plads, just north of Christianshavn, was bought. Later is was renamed to Christiansholm. A new island was created, with land fill, just east of Christianholm, where a large arsenal was built and finished in 1770. Later, this island was named Arsenaløen and was expanded to the east. 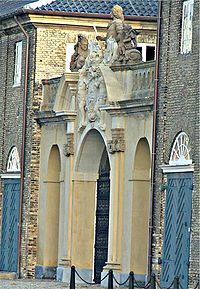 Originally, a main gate existed to Nyholm. Nyholm wasn’t just a name for the northernmost island, but was the name for the area used by the navy. Access to the area required sailing to Holmen. A ferry sailed to Christiansholm, where one went over a bridge to Arsenaløen. Here, one could go to Nyholm though a gate, which faced the canal between Arsenaløen and Christiansholm. The gate was called “The Kings Gate”. It is not visited by many people anymore. This is because in the middle of the 19th century, Arsenaløen formed a land connection with Christianshavn, so a new main entrance was created to Holmen, the so called Warf Bridge Guard, or Værftsbrovagt. The ferry to Christiansholm stopped and the Kings Gate was no longer used.

Around 1750, dumping of dirt and fill created two small islands south of Nyholm, “Ballastøen” and “Ankerøen”, along with a larger island, “Langøen". From Nyholm, a bridge was built to Ballastøen and from Ballastøen to Ankerøen and from Ankerøen to Langøen. From Langøen’s southern end, a bridge was built to Arsenaløen. This happened in the later part of the 18th century. At this point, all of Holmens islands were connected. East from Langøen, an atoll was found called “Mudderøen”; the area between Mudderøen (including Mudderøen itself) and Langøen was filled, and “Frederiksholm” was created. This area was supposed to become a residential area for Navy personal, but this plan was never followed through. Instead, the area became a storage area for ship masts, along with a row of other buildings on the island. After the Gunboat War
Gunboat War
The Gunboat War was the naval conflict between Denmark–Norway and the British Navy during the Napoleonic Wars. The war's name is derived from the Danish tactic of employing small gunboats against the conventional Royal Navy...
, slips were made for the storage of canonships. When Nyholm, as mentioned, was expanded together with Ballastøen and Ankerøen to present day Nyholm, Ankerøen and Ballastøen were replaced with Ballasø and Ankerø, which were created west of Frederiksholm.