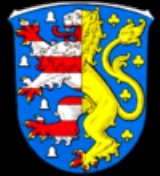 Encyclopedia
The Hochtaunuskreis is a Kreis (district
District
Districts are a type of administrative division, in some countries managed by a local government. They vary greatly in size, spanning entire regions or counties, several municipalities, or subdivisions of municipalities.-Austria:...
) in the middle of Hesse
Hesse
Hesse or Hessia is both a cultural region of Germany and the name of an individual German state.* The cultural region of Hesse includes both the State of Hesse and the area known as Rhenish Hesse in the neighbouring Rhineland-Palatinate state...
, Germany
Germany
Germany , officially the Federal Republic of Germany , is a federal parliamentary republic in Europe. The country consists of 16 states while the capital and largest city is Berlin. Germany covers an area of 357,021 km2 and has a largely temperate seasonal climate...
and is part of the Frankfurt/Rhine-Main Metropolitan Region. Neighbouring districts are Lahn-Dill, Wetteraukreis
Wetteraukreis
The Wetteraukreis is a Kreis in the middle of Hesse, Germany. Neighbouring districts are Landkreis Gießen, Vogelsbergkreis, Main-Kinzig-Kreis, district-free Stadt Frankfurt, Hochtaunuskreis, Lahn-Dill-Kreis.-History:...
, district-free Frankfurt
Frankfurt
Frankfurt am Main , commonly known simply as Frankfurt, is the largest city in the German state of Hesse and the fifth-largest city in Germany, with a 2010 population of 688,249. The urban area had an estimated population of 2,300,000 in 2010...
, Main-Taunus, Rheingau-Taunus, Limburg-Weilburg
Limburg-Weilburg
Limburg-Weilburg is a Kreis in the west of Hesse, Germany. Neighboring districts are Lahn-Dill, Hochtaunuskreis, Rheingau-Taunus, Rhein-Lahn, Westerwaldkreis.-History:...
.
The Hochtaunuskreis and the Landkreis Starnberg regularly compete for the title of the wealthiest district in Germany.

The district was created in 1972 when the previous districts Obertaunus and Usingen were merged.

Geographically it covers the Taunus
Taunus
The Taunus is a low mountain range in Hesse, Germany that composes part of the Rhenish Slate Mountains. It is bounded by the river valleys of Rhine, Main and Lahn. On the opposite side of the Rhine, the mountains are continued by the Hunsrück...
mountains. The highest elevation of the Taunus, the 881 meter high Großer Feldberg
Großer Feldberg
The Großer Feldberg is the highest mountain in the Taunus mountains. It is situated in the Hochtaunuskreis district in Hessen, Germany....
, is in the district. Lowest elevation of the district with 130m is the Ober Erlenbach. The wealthy towns in the district's densely populated southern part belong to the Frankfurt urban area.