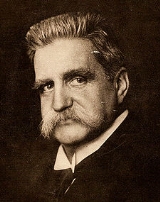 A professor's son, Branting was educated in Stockholm
Stockholm
Stockholm is the capital and the largest city of Sweden and constitutes the most populated urban area in Scandinavia. Stockholm is the most populous city in Sweden, with a population of 851,155 in the municipality , 1.37 million in the urban area , and around 2.1 million in the metropolitan area...
and at the University of Uppsala. He developed a scientific background in mathematical astronomy and was an assistant at the Stockholm Observatory
Stockholm Observatory
The Stockholm Observatory is an astronomical institution in Stockholm, Sweden, founded in the 18th century and today part of Stockholm University...
, but gave up his devotion to scientific work to become a journalist in 1884 and began editing the newspapers Tiden and Social-Demokraten. His decision to publish an article by the more radical socialist Axel Danielsson
Axel Danielsson
Axel Danielsson was a Swedish socialist agitator, journalist and writer, born in Värmland. He was a prominent leader of the early Swedish Social Democratic Party...
- a piece denounced by opponents as insulting to religious sensitivities - resulted in political convictions for blasphemy
Blasphemy
Blasphemy is irreverence towards religious or holy persons or things. Some countries have laws to punish blasphemy, while others have laws to give recourse to those who are offended by blasphemy...
and imprisonment for both men. Branting was imprisoned for three months in 1888.

In the early years of the 20th century, Branting led the Social Democrats in opposing a war to keep Norway
Norway
Norway , officially the Kingdom of Norway, is a Nordic unitary constitutional monarchy whose territory comprises the western portion of the Scandinavian Peninsula, Jan Mayen, and the Arctic archipelago of Svalbard and Bouvet Island. Norway has a total area of and a population of about 4.9 million...
united with Sweden. When the crisis came in 1905, he coined the slogan "Hands off Norway, King!" The Social Democrats organized resistance to a call-up of reserves and a general strike against a war, and are credited with a substantial share in preventing one.

Hjalmar Branting accepted Eduard Bernstein
Eduard Bernstein
Eduard Bernstein was a German social democratic theoretician and politician, a member of the SPD, and the founder of evolutionary socialism and revisionism.- Life :...
's revision of Marxism
Marxism
Marxism is an economic and sociopolitical worldview and method of socioeconomic inquiry that centers upon a materialist interpretation of history, a dialectical view of social change, and an analysis and critique of the development of capitalism. Marxism was pioneered in the early to mid 19th...
and became a reformist
Reformism
Reformism is the belief that gradual democratic changes in a society can ultimately change a society's fundamental economic relations and political structures...
socialist, advocating a peaceful transition from capitalism
Capitalism
Capitalism is an economic system that became dominant in the Western world following the demise of feudalism. There is no consensus on the precise definition nor on how the term should be used as a historical category...
towards socialism. He believed that if workers were given the vote, this could be achieved by parliamentary ways. Branting supported the February Revolution
February Revolution
The February Revolution of 1917 was the first of two revolutions in Russia in 1917. Centered around the then capital Petrograd in March . Its immediate result was the abdication of Tsar Nicholas II, the end of the Romanov dynasty, and the end of the Russian Empire...
in Russia
Russia
Russia or , officially known as both Russia and the Russian Federation , is a country in northern Eurasia. It is a federal semi-presidential republic, comprising 83 federal subjects...
in 1917. He was pro-Menshevik
Menshevik
The Mensheviks were a faction of the Russian revolutionary movement that emerged in 1904 after a dispute between Vladimir Lenin and Julius Martov, both members of the Russian Social-Democratic Labour Party. The dispute originated at the Second Congress of that party, ostensibly over minor issues...
and defended the government of Alexander Kerensky
Alexander Kerensky
Alexander Fyodorovich Kerensky was a major political leader before and during the Russian Revolutions of 1917.Kerensky served as the second Prime Minister of the Russian Provisional Government until Vladimir Lenin was elected by the All-Russian Congress of Soviets following the October Revolution...
, who he even personally visited in Petrograd.

When the October Revolution
October Revolution
The October Revolution , also known as the Great October Socialist Revolution , Red October, the October Uprising or the Bolshevik Revolution, was a political revolution and a part of the Russian Revolution of 1917...
broke out the same year, Branting condemned the Bolshevik
Bolshevik
The Bolsheviks, originally also Bolshevists , derived from bol'shinstvo, "majority") were a faction of the Marxist Russian Social Democratic Labour Party which split apart from the Menshevik faction at the Second Party Congress in 1903....
seizure of power. 1917 saw a split in the Swedish Social Democratic Party on this question, and the youth league
Young Left (Sweden)
Young Left is the youth organization of the Swedish Left Party.-Ideology:It is an organization that organizes the youth of today to fight for socialist and feminist social change. Young Left is a youth organization developed out of the labour movement, with influences from environmentalism, the...
and the revolutionary sections of the party broke away and formed the Social Democratic Left Party of Sweden
Left Party (Sweden)
The Left Party is a socialist and feminist political party in Sweden, from 1967 to 1990 known as the Left Party – The Communists .On welfare issues, the party opposes privatizations...
, headed by Zeth Höglund
Zeth Höglund
Carl Zeth "Zäta" Konstantin Höglund was a leading Swedish communist politician, anti-militarist, author, journalist and mayor of Stockholm ....
. This group soon became the Swedish Communist Party. Zeth Höglund later returned to the Social Democratic Party, and wrote a two-volume biography about Hjalmar Branting.

As Prime Minister he brought Sweden into the League of Nations
League of Nations
The League of Nations was an intergovernmental organization founded as a result of the Paris Peace Conference that ended the First World War. It was the first permanent international organization whose principal mission was to maintain world peace...
and was personally active as a delegate within it. When the question of whether Åland should be handed over to Sweden after the independence of Finland
Finland
Finland , officially the Republic of Finland, is a Nordic country situated in the Fennoscandian region of Northern Europe. It is bordered by Sweden in the west, Norway in the north and Russia in the east, while Estonia lies to its south across the Gulf of Finland.Around 5.4 million people reside...
from Russia
Russian Soviet Federative Socialist Republic
The Russian Soviet Federative Socialist Republic , commonly referred to as Soviet Russia, Bolshevik Russia, or simply Russia, was the largest, most populous and economically developed republic in the former Soviet Union....
was brought up, he let the League of Nation decide upon the issue. He was awarded the Nobel Peace Prize
Nobel Peace Prize
The Nobel Peace Prize is one of the five Nobel Prizes bequeathed by the Swedish industrialist and inventor Alfred Nobel.-Background:According to Nobel's will, the Peace Prize shall be awarded to the person who...
in 1921 for his work in the League of Nations.

Branting is commemorated by the Branting Monument in Stockholm. Additionally in Gothenburg
Gothenburg
Gothenburg is the second-largest city in Sweden and the fifth-largest in the Nordic countries. Situated on the west coast of Sweden, the city proper has a population of 519,399, with 549,839 in the urban area and total of 937,015 inhabitants in the metropolitan area...
, there is a tram and bus interchange named after Branting, in Swedish
Swedish language
Swedish is a North Germanic language, spoken by approximately 10 million people, predominantly in Sweden and parts of Finland, especially along its coast and on the Åland islands. It is largely mutually intelligible with Norwegian and Danish...
it is Hjalmar Brantingsplatsen. In Copenhagen
Copenhagen
Copenhagen is the capital and largest city of Denmark, with an urban population of 1,199,224 and a metropolitan population of 1,930,260 . With the completion of the transnational Øresund Bridge in 2000, Copenhagen has become the centre of the increasingly integrating Øresund Region...
, a street is named after him.