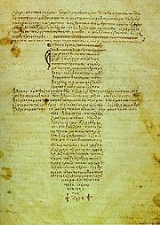 The Hippocratic Oath is an oath historically taken by physician
Physician
A physician is a health care provider who practices the profession of medicine, which is concerned with promoting, maintaining or restoring human health through the study, diagnosis, and treatment of disease, injury and other physical and mental impairments...
s and other healthcare professionals swearing to practice medicine ethically. It is widely believed to have been written by Hippocrates
Hippocrates
Hippocrates of Cos or Hippokrates of Kos was an ancient Greek physician of the Age of Pericles , and is considered one of the most outstanding figures in the history of medicine...
, often regarded as the father of western medicine, or by one of his students. The oath is written in Ionic Greek
Ionic Greek
Ionic Greek was a subdialect of the Attic–Ionic dialect group of Ancient Greek .-History:Ionic dialect appears to have spread originally from the Greek mainland across the Aegean at the time of the Dorian invasions, around the 11th Century B.C.By the end of the Greek Dark Ages in the 5th Century...
(late 5th century BC), and is usually included in the Hippocratic Corpus
Hippocratic Corpus
The Hippocratic Corpus , or Hippocratic Collection, is a collection of around 60 early Ancient Greek medical works strongly associated with the physician Hippocrates and his teachings...
. Classical scholar Ludwig Edelstein proposed that the oath was written by Pythagoreans, a theory that has been questioned due to the lack of evidence for a school of Pythagorean medicine. Of historic and traditional value, the oath is considered a rite of passage for practitioners of medicine in many countries, although nowadays the modernized version of the text varies among them.

The Hippocratic Oath (orkos) is one of the most widely known of Greek medical texts. It requires a new physician to swear upon a number of healing gods that he will uphold a number of professional ethical standards.