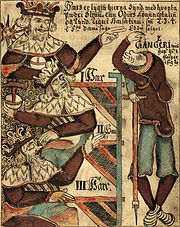 High, Just-As-High, and Third (Old Norse
Old Norse
Old Norse is a North Germanic language that was spoken by inhabitants of Scandinavia and inhabitants of their overseas settlements during the Viking Age, until about 1300....
Hár, Jafnhár, and Þriðji, respectively) are three men that respond to questions posed by Gangleri
Gangleri
Gangleri may refer to:* one of Odin's many nicknames meaning "the wanderer" or "Wayweary"* the name of the ancient Swedish king Gylfi, given while in disguise, as described in the book Gylfaginning collected in the Prose Edda...
(described as king Gylfi
Gylfi
In Norse mythology, Gylfi, Gylfe, Gylvi, or Gylve was the earliest king in Scandinavia recorded. The traditions on Gylfi deal with how he was tricked by the gods and his relations with the goddess Gefjon.-The creation of Zealand:...
in disguise) in the Prose Edda
Prose Edda
The Prose Edda, also known as the Younger Edda, Snorri's Edda or simply Edda, is an Icelandic collection of four sections interspersed with excerpts from earlier skaldic and Eddic poetry containing tales from Nordic mythology...
book Gylfaginning
Gylfaginning
Gylfaginning, or the Tricking of Gylfi , is the first part of Snorri Sturluson's Prose Edda after Prologue. The Gylfaginning deals with the creation and destruction of the world of the Norse gods, and many other aspects of Norse mythology...
. The three figures sit upon thrones; High upon the lowest, Just-As-High on the mid-highest, and Third on the highest of the thrones.

It is stated in Chapter 20 of Gylfaginning (translation by Anthony Faulkes) that these names are pseudonym
Pseudonym
A pseudonym is a name that a person assumes for a particular purpose and that differs from his or her original orthonym...
s employed by Odin
Odin
Odin is a major god in Norse mythology and the ruler of Asgard. Homologous with the Anglo-Saxon "Wōden" and the Old High German "Wotan", the name is descended from Proto-Germanic "*Wodanaz" or "*Wōđanaz"....
: