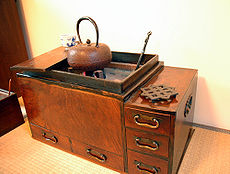 The is a traditional Japan
Japan
Japan is an island nation in East Asia. Located in the Pacific Ocean, it lies to the east of the Sea of Japan, China, North Korea, South Korea and Russia, stretching from the Sea of Okhotsk in the north to the East China Sea and Taiwan in the south...
ese heating device. It consists of a round, cylindrical or a box-shaped open-topped container, made from or lined with a heatproof material and designed to hold burning charcoal
Charcoal
Charcoal is the dark grey residue consisting of carbon, and any remaining ash, obtained by removing water and other volatile constituents from animal and vegetation substances. Charcoal is usually produced by slow pyrolysis, the heating of wood or other substances in the absence of oxygen...
.

In North America
North America
North America is a continent wholly within the Northern Hemisphere and almost wholly within the Western Hemisphere. It is also considered a northern subcontinent of the Americas...
, the term "hibachi" is used to refer to a small cooking stove heated by charcoal (actually called shichirin
Shichirin
]The shichirin is a small charcoal grill.-Description:The shichirin is a lightweight, compact, and easy-to-move cooking stove. Charcoal is chiefly used for the fuel of shichirin. It has had prototypes since ancient times, and it is said that shichirin roughly the same as today's were made in the...
in Japanese), or to an iron hot plate (teppan) used in teppanyaki
Teppanyaki
is a style of Japanese cuisine that uses an iron griddle to cook food. The word teppanyaki is derived from teppan , which means iron plate, and yaki , which means grilled, broiled or pan-fried...
restaurants.

It is not known when the hibachi was first used in Japan, however written records suggest that it was used by the Heian period
Heian period
The is the last division of classical Japanese history, running from 794 to 1185. The period is named after the capital city of Heian-kyō, or modern Kyōto. It is the period in Japanese history when Buddhism, Taoism and other Chinese influences were at their height...
(798-1185 AD). Owing to the low availability of metal in Japan, early hibachis were made from dug-out cypress
Cupressaceae
The Cupressaceae or cypress family is a conifer family with worldwide distribution. The family includes 27 to 30 genera , which include the junipers and redwoods, with about 130-140 species in total. They are monoecious, subdioecious or dioecious trees and shrubs from 1-116 m tall...
wood lined with clay. However, craftsmen soon began to make more decorative versions with lacquer
Lacquer
In a general sense, lacquer is a somewhat imprecise term for a clear or coloured varnish that dries by solvent evaporation and often a curing process as well that produces a hard, durable finish, in any sheen level from ultra matte to high gloss and that can be further polished as required...
ed finishes, gold leaf
Gold leaf
right|thumb|250px|[[Burnishing]] gold leaf with an [[agate]] stone tool, during the water gilding processGold leaf is gold that has been hammered into extremely thin sheets and is often used for gilding. Gold leaf is available in a wide variety of karats and shades...
, and other artistic embellishments. Stronger materials such as metal and ceramics became popular over time. Traditional hibachis can be very attractive objects in themselves and are today sometimes sold as antiques. They were originally used mainly by the samurai classes and aristocrats but gradually spread among ordinary people. Their design developed throughout the Edo period
Edo period
The , or , is a division of Japanese history which was ruled by the shoguns of the Tokugawa family, running from 1603 to 1868. The political entity of this period was the Tokugawa shogunate....
.

For most of its history the hibachi was used for heating, but it has been put to many uses; for example, as a cigarette lighter
Lighter
A lighter is a portable device used to generate a flame. It consists of a metal or plastic container filled with a flammable fluid or pressurized liquid gas, a means of ignition, and some provision for extinguishing the flame.- History :...
and portable stove for Japanese troops during World War II
World War II
World War II, or the Second World War , was a global conflict lasting from 1939 to 1945, involving most of the world's nations—including all of the great powers—eventually forming two opposing military alliances: the Allies and the Axis...
.

The hibachi was once a common sight in Japan before the Second World War, and was often seen in waiting rooms at train stations, but it became a rarity and was gradually replaced by the oil heaters now commonplace in Japan. (Central heating is relatively rare in Japanese homes.) 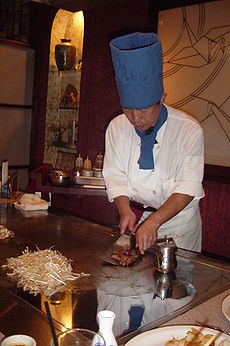 The traditional Japanese hibachi is a heating device and not usually used for cooking. In English, however, "hibachi" often refers to small cooking grills typically made of aluminium
Aluminium
Aluminium or aluminum is a silvery white member of the boron group of chemical elements. It has the symbol Al, and its atomic number is 13. It is not soluble in water under normal circumstances....
or cast iron
Cast iron
Cast iron is derived from pig iron, and while it usually refers to gray iron, it also identifies a large group of ferrous alloys which solidify with a eutectic. The color of a fractured surface can be used to identify an alloy. White cast iron is named after its white surface when fractured, due...
, with the latter generally being of higher quality. Owing to their small size, hibachi grills are popular as a form of portable barbecue
Barbecue
Barbecue or barbeque , used chiefly in the United States, Canada, the United Kingdom, New Zealand and Australia is a method and apparatus for cooking meat, poultry and occasionally fish with the heat and hot smoke of a fire, smoking wood, or hot coals of...
. They resemble traditional, Japanese, charcoal-heated cooking utensils called shichirin
Shichirin
]The shichirin is a small charcoal grill.-Description:The shichirin is a lightweight, compact, and easy-to-move cooking stove. Charcoal is chiefly used for the fuel of shichirin. It has had prototypes since ancient times, and it is said that shichirin roughly the same as today's were made in the...
. It has been suggested that these grills were confusingly marketed as "hibachi" when they were introduced to North America because that word was easier than "shichirin" for English speakers to pronounce.

Alternatively, "hibachi-style" is often confused in the U.S. as a term for Japanese teppanyaki
Teppanyaki
is a style of Japanese cuisine that uses an iron griddle to cook food. The word teppanyaki is derived from teppan , which means iron plate, and yaki , which means grilled, broiled or pan-fried...
cooking, in which gas-heated hotplates are integrated into tables around which many people (often multiple parties) can sit and eat at once. The chef performs the cooking in front of the diners, typically with theatrical flair—such as lighting a volcano-shaped stack of raw onion hoops on fire.
The source of this article is wikipedia, the free encyclopedia.  The text of this article is licensed under the GFDL.