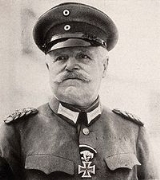 Encyclopedia
Hermann von Eichhorn was a Prussian
Kingdom of Prussia
The Kingdom of Prussia was a German kingdom from 1701 to 1918. Until the defeat of Germany in World War I, it comprised almost two-thirds of the area of the German Empire...
general
General
A general officer is an officer of high military rank, usually in the army, and in some nations, the air force. The term is widely used by many nations of the world, and when a country uses a different term, there is an equivalent title given....
.

Eichhorn was born in Breslau in the Province of Silesia
Province of Silesia
The Province of Silesia was a province of the Kingdom of Prussia from 1815 to 1919.-Geography:The territory comprised the bulk of the former Bohemian crown land of Silesia and the County of Kladsko, which King Frederick the Great had conquered from the Austrian Habsburg Monarchy in the 18th...
. A veteran of the Austro-Prussian War
Austro-Prussian War
The Austro-Prussian War was a war fought in 1866 between the German Confederation under the leadership of the Austrian Empire and its German allies on one side and the Kingdom of Prussia with its German allies and Italy on the...
and the Franco-Prussian War
Franco-Prussian War
The Franco-Prussian War or Franco-German War, often referred to in France as the 1870 War was a conflict between the Second French Empire and the Kingdom of Prussia. Prussia was aided by the North German Confederation, of which it was a member, and the South German states of Baden, Württemberg and...
, he had risen through the ranks of the Prussian Army
Prussian Army
The Royal Prussian Army was the army of the Kingdom of Prussia. It was vital to the development of Brandenburg-Prussia as a European power.The Prussian Army had its roots in the meager mercenary forces of Brandenburg during the Thirty Years' War...
, being appointed chief of the staff of the VI Army Corps at Breslau in 1897, commanding the 9th Division
9th Division (German Empire)
The 9th Division was a unit of the Prussian/German Army. It was formed in Glogau in November 1816 as a brigade, became the 10th Division on September 5, 1818, and was renumbered the 9th Division on February 28, 1820. The division was subordinated in peacetime to the V Army Corps...
from 1901 to 1904 and the XVIII Army Corps from 1904 to 1912. In 1912 he took command of the 7th Army Inspection, the peacetime headquarters for the Imperial German XVI, XVIII, and XXI Army Corps.

At the outbreak of World War I
World War I
World War I , which was predominantly called the World War or the Great War from its occurrence until 1939, and the First World War or World War I thereafter, was a major war centred in Europe that began on 28 July 1914 and lasted until 11 November 1918...
, Eichhorn was incapacitated in consequence of an accident, but was able to play a part in the Battle of Soissons
Battle of Soissons
The Battle of Soissons can refer to one of several important historical battles, all of which took place in the vicinity of the French town Soissons:...
. He became the commanding general of the 10th Army on January 21, 1915, which he would command until March 5, 1918. This corps engaged in the great battle of the Masurian Lakes in February 1915. In August, he took Kovno and afterwards the fortresses of Grodno and Olita, and continued his advance into Russia
Russia
Russia or , officially known as both Russia and the Russian Federation , is a country in northern Eurasia. It is a federal semi-presidential republic, comprising 83 federal subjects...
. He received the Pour le Mérite
Pour le Mérite
The Pour le Mérite, known informally as the Blue Max , was the Kingdom of Prussia's highest military order for German soldiers until the end of World War I....
on August 18, 1915 and the oakleaves to the Pour le Mérite on September 28, 1915. On July 30, 1916, while remaining in command of the 10th Army, Eichhorn became supreme commander of Army Group Eichhorn (Heeresgruppe Eichhorn) based around 10th Army, which he would command until March 31, 1918. On December 18, 1917 Eichhorn was promoted to Generalfeldmarschall
Generalfeldmarschall
Field Marshal or Generalfeldmarschall in German, was a rank in the armies of several German states and the Holy Roman Empire; in the Austrian Empire, the rank Feldmarschall was used...
. On April 3, 1918, Field Marshal von Eichhorn became supreme commander of Army Group Kiev (Heeresgruppe Kiew) and simultaneously military governor of Ukraine.

He was assassinated in Kiev
Kiev
Kiev or Kyiv is the capital and the largest city of Ukraine, located in the north central part of the country on the Dnieper River. The population as of the 2001 census was 2,611,300. However, higher numbers have been cited in the press....
on July 30 by Boris Mikhailovich Donskoy from Left Socialist-Revolutionaries
Left Socialist-Revolutionaries
In 1917, Russia the Socialist-Revolutionary Party split between those who supported the Provisional Government, established after the February Revolution, and those who supported the Bolsheviks who favoured a communist insurrection....
.
The source of this article is wikipedia, the free encyclopedia.  The text of this article is licensed under the GFDL.