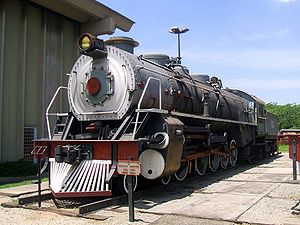 Henschel & Son was a German
Germany
Germany , officially the Federal Republic of Germany , is a federal parliamentary republic in Europe. The country consists of 16 states while the capital and largest city is Berlin. Germany covers an area of 357,021 km2 and has a largely temperate seasonal climate...
company, situated in Kassel
Kassel
Kassel is a town located on the Fulda River in northern Hesse, Germany. It is the administrative seat of the Kassel Regierungsbezirk and the Kreis of the same name and has approximately 195,000 inhabitants.- History :...
, best known during the 20th century as a maker of transportation equipment, including locomotive
Locomotive
A locomotive is a railway vehicle that provides the motive power for a train. The word originates from the Latin loco – "from a place", ablative of locus, "place" + Medieval Latin motivus, "causing motion", and is a shortened form of the term locomotive engine, first used in the early 19th...
s, truck
Truck
A truck or lorry is a motor vehicle designed to transport cargo. Trucks vary greatly in size, power, and configuration, with the smallest being mechanically similar to an automobile...
s, bus
Bus
A bus is a road vehicle designed to carry passengers. Buses can have a capacity as high as 300 passengers. The most common type of bus is the single-decker bus, with larger loads carried by double-decker buses and articulated buses, and smaller loads carried by midibuses and minibuses; coaches are...
es and trolleybus
Trolleybus
A trolleybus is an electric bus that draws its electricity from overhead wires using spring-loaded trolley poles. Two wires and poles are required to complete the electrical circuit...
es, and armoured fighting vehicle
Armoured fighting vehicle
An armoured fighting vehicle is a combat vehicle, protected by strong armour and armed with weapons. AFVs can be wheeled or tracked....
s and weapon
Weapon
A weapon, arm, or armament is a tool or instrument used with the aim of causing damage or harm to living beings or artificial structures or systems...
s.

Georg Christian Carl Henschel founded the factory in 1810 at Kassel. His son Carl Anton Henschel founded another factory in 1837. In 1848, the company began manufacturing locomotives. The factory became the largest locomotive manufacturer in Germany by the 20th century. Henschel built 10 articulated steam trucks, using Doble steam designs
Doble steam car
Any of several makes of steam-powered automobile in the early 20th century, including Doble Detroit, Doble Steam Car, and Doble Automobile, are referred to as a Doble because of their founding or association with Abner DobleFox Stephen...
, for Deutsche Reichsbahn
Deutsche Reichsbahn-Gesellschaft
The Deutsche Reichsbahn – was the name of the German national railway created from the railways of the individual states of the German Empire following the end of World War I....
railways as delivery trucks. Several cars were built as well, one of which became Hermann Göring
Hermann Göring
Hermann Wilhelm Göring, was a German politician, military leader, and a leading member of the Nazi Party. He was a veteran of World War I as an ace fighter pilot, and a recipient of the coveted Pour le Mérite, also known as "The Blue Max"...
's staff car. In 1935 Henschel was able to upgrade its various steam locomotives to a high speed Streamliner
Streamliner
A streamliner is a vehicle incorporating streamlining in a shape providing reduced air resistance. The term is applied to high-speed railway trainsets of the 1930s to 1950s, and to their successor "bullet trains". Less commonly, the term is applied to fully faired recumbent bicycles...
type with a maximum speeds of up to 85mph by the addition of a removable shell over the old steam locomotive.

Early in 1935, Henschel began manufacturing Panzer I
Panzer I
The Panzer I was a light tank produced in Germany in the 1930s. The name is short for the German ' , abbreviated . The tank's official German ordnance inventory designation was SdKfz 101 .Design of the Panzer I began in 1932 and mass production in 1934...
tank
Tank
A tank is a tracked, armoured fighting vehicle designed for front-line combat which combines operational mobility, tactical offensive, and defensive capabilities...
s. During World War II
World War II
World War II, or the Second World War , was a global conflict lasting from 1939 to 1945, involving most of the world's nations—including all of the great powers—eventually forming two opposing military alliances: the Allies and the Axis...
in 1939-1940 it began large-scale production of the Panzer III
Panzer III
Panzer III was the common name of a medium tank that was developed in the 1930s by Germany and was used extensively in World War II. The official German designation was Panzerkampfwagen III translating as "armoured battle vehicle". It was intended to fight other armoured fighting vehicles and...
, and the Tiger I
Tiger I
Tiger I is the common name of a German heavy tank developed in 1942 and used in World War II. The final official German designation was Panzerkampfwagen Tiger Ausf. E, often shortened to Tiger. It was an answer to the unexpectedly formidable Soviet armour encountered in the initial months of...
from 1941. Henschel was the sole manufacturer of the Tiger II
Tiger II
Tiger II is the common name of a German heavy tank of the Second World War. The final official German designation was Panzerkampfwagen Tiger Ausf. B,Panzerkampfwagen – abbr: Pz. or Pz.Kfw. Ausführung – abbr: Ausf. .The full titles Panzerkampfwagen Tiger Ausf...
. In 1945, the company had 8000 workers working in two shifts each of 12 hours. The company used forced labour extensively. The company's factories were among the most important bomber targets and were nearly completely destroyed.

Manufacturing began again in 1948. In 1964, the company took over Rheinische Stahlwerke and became Rheinstahl Henschel AG, in 1976 Thyssen-Henschel
Thyssen-Henschel
Thyssen Henschel was a German industrial firm and defense contractor. Its products include the TAM medium tank for Argentina, the Mexican Henschel APC and the Marder infantry fighting vehicle....
, and 1990 ABB Henschel AG. In 1996, the company became ABB Daimler Benz Transportation Adtranz
Adtranz
ABB Daimler-Benz Transportation , commonly known under its brand Adtranz, was a multi-national rail transport equipment manufacturer with facilities concentrated in Europe and the USA....
. The company was subsequently acquired by Bombardier (Canada) around 2002. The Kassel facility still exists and is one of the world's largest manufacturers of locomotives.