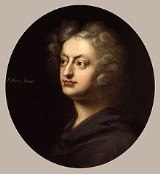 Overview
Henry Purcell was an English organist
Organist
An organist is a musician who plays any type of organ. An organist may play solo organ works, play with an ensemble or orchestra, or accompany one or more singers or instrumental soloists...
and Baroque
Baroque
The Baroque is a period and the style that used exaggerated motion and clear, easily interpreted detail to produce drama, tension, exuberance, and grandeur in sculpture, painting, literature, dance, and music...
composer of secular
Secular music
Secular music is non-religious music. "Secular" means being separate from religion.In the West, secular music developed in the Medieval period and was used in the Renaissance. Swaying authority from the Church that focused more on Common Law influenced all aspects of Medieval life, including music...
and sacred music. Although Purcell incorporated Italian and French stylistic elements into his compositions, his legacy was a uniquely English form of Baroque music
Baroque music
Baroque music describes a style of Western Classical music approximately extending from 1600 to 1760. This era follows the Renaissance and was followed in turn by the Classical era...
. He is generally considered to be one of the greatest English composers; no other native-born English composer approached his fame until Edward Elgar
Edward Elgar
Sir Edward William Elgar, 1st Baronet OM, GCVO was an English composer, many of whose works have entered the British and international classical concert repertoire. Among his best-known compositions are orchestral works including the Enigma Variations, the Pomp and Circumstance Marches, concertos...
.
Purcell was born in St Ann's Lane Old Pye Street, Westminster
Westminster
Westminster is an area of central London, within the City of Westminster, England. It lies on the north bank of the River Thames, southwest of the City of London and southwest of Charing Cross...
.