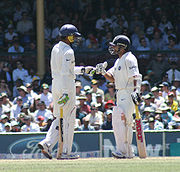 In the sport of cricket
Cricket
Cricket is a bat-and-ball game played between two teams of 11 players on an oval-shaped field, at the centre of which is a rectangular 22-yard long pitch. One team bats, trying to score as many runs as possible while the other team bowls and fields, trying to dismiss the batsmen and thus limit the...
, batsmen often wear a helmet to protect themselves from injury by the cricket ball
Cricket ball
A cricket ball is a hard, solid leather ball used to play cricket. Constructed of cork and leather, a cricket ball is heavily regulated by cricket law at first class level...
, which is very hard and can be bowled to them at speeds over 90 miles per hour (40.2 m/s).

There are recorded instances of cricketers using towels, scarves and padded caps to protect themselves throughout cricket history. Patsy Hendren
Patsy Hendren
Elias Henry Hendren better known as Patsy Hendren was an English cricketer. Patsy was one of the most prolific English batsmen of the period between the wars, averaging 47.63 in his 51 Test matches...
was one of the first to use a self designed protective hat in the 1930s. Helmets were not in common use until the 1970s. Mike Brearley
Mike Brearley
John Michael Brearley OBE is a former cricketer who captained the England cricket team in 31 of his 39 Test matches, winning 17 and losing only 4. He was the President of the Marylebone Cricket Club in 2007–08.-Early life:...
was another player who wore his own design. Tony Greig
Tony Greig
Anthony "Tony" William Greig is a former English Test cricketer and currently a commentator.Born in Queenstown, South Africa, Greig qualified to play for England by virtue of his Scottish father. He was a tall batting all-rounder who bowled both medium pace and off spin. He became captain of the...
was of the opinion that they would make cricket more dangerous by encouraging bowlers to bounce the batsmen.

Graham Yallop
Graham Yallop
Graham Neil Yallop is a former cricketer who played for Victoria and Australia. He captained Australia briefly during the tumultuous era of World Series Cricket in the late 1970s...
of Australia was the first to wear a protective helmet to a test match
Test cricket
Test cricket is the longest form of the sport of cricket. Test matches are played between national representative teams with "Test status", as determined by the International Cricket Council , with four innings played between two teams of 11 players over a period of up to a maximum five days...
on 17 March 1978 when playing against West Indies at Bridgetown
Bridgetown
The city of Bridgetown , metropolitan pop 96,578 , is the capital and largest city of the nation of Barbados. Formerly, the Town of Saint Michael, the Greater Bridgetown area is located within the parish of Saint Michael...
. Later Dennis Amiss of England popularized it in Test cricket.

Helmets began to be widely worn thereafter. Nowadays it is almost unheard of for a professional cricketer to face a fast bowler without a helmet, and in under-19 cricket they are compulsory for all batsmen and any fielder within 15 yards (13.7 m) of the bat.

Cricket helmets cover the whole of the skull, and have a grill or perspex visor to protect the face.