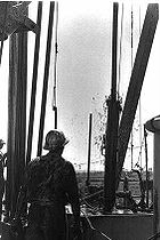 Heletz is a moshav
Moshav
Moshav is a type of Israeli town or settlement, in particular a type of cooperative agricultural community of individual farms pioneered by the Labour Zionists during the second aliyah...
in southern Israel
Israel
The State of Israel is a parliamentary republic located in the Middle East, along the eastern shore of the Mediterranean Sea...
. Located between Ashkelon
Ashkelon
Ashkelon is a coastal city in the South District of Israel on the Mediterranean coast, south of Tel Aviv, and north of the border with the Gaza Strip. The ancient seaport of Ashkelon dates back to the Neolithic Age...
, Kiryat Gat and Sderot
Sderot
Sderot is a western Negev city in the Southern District of Israel. According to the Israel Central Bureau of Statistics , at the end of 2009 the city had a total population of 20,700. The city has been an ongoing target of Qassam rocket attacks from the Gaza Strip...
, it falls under the jurisdiction of Hof Ashkelon Regional Council
Hof Ashkelon Regional Council
Hof Ashkelon Regional Council is a regional council in the Southern District of Israel.The council is bordered to the north by Be'er Tuvia Regional Council, to the east by the Be'er Tuvia, Lakhish, Shafir and Yoav Regional Councils, to the south by Sha'ar HaNegev Regional Council and the Gaza...
. In 2006 it had a population of 422.

The moshav was founded in 1950 by immigrants
Aliyah
Aliyah is the immigration of Jews to the Land of Israel . It is a basic tenet of Zionist ideology. The opposite action, emigration from Israel, is referred to as yerida . The return to the Holy Land has been a Jewish aspiration since the Babylonian exile...
from Yemen
Yemen
The Republic of Yemen , commonly known as Yemen , is a country located in the Middle East, occupying the southwestern to southern end of the Arabian Peninsula. It is bordered by Saudi Arabia to the north, the Red Sea to the west, and Oman to the east....
, and was named after Helez, one of King David's Warriors
King David's Warriors
David's Mighty Warriors are a group of biblical characters explicitly singled out by an appendix of the Books of Samuel. The text divides them into the "Three", of which there are three, and "Thirty", of which there are more than thirty...
.

The Heletz oil field
Oil field
An oil field is a region with an abundance of oil wells extracting petroleum from below ground. Because the oil reservoirs typically extend over a large area, possibly several hundred kilometres across, full exploitation entails multiple wells scattered across the area...
was the location of the first successful oil well
Oil well
An oil well is a general term for any boring through the earth's surface that is designed to find and acquire petroleum oil hydrocarbons. Usually some natural gas is produced along with the oil. A well that is designed to produce mainly or only gas may be termed a gas well.-History:The earliest...
in the country, with extraction beginning in 1955 resulting in much celebration. It remains the most economic oil field in Israel.

Recently Avenue Group, Inc. and Tomco Energy have restarted production from the Heletz oil field. The companies reported total production of over 3200 barrels (508,759.3 l) of oil since June 11. Three more wells are currently awaiting the delivery and installation of downhole pumps in preparation for their return to production. The companies have also retained the international consultant firm of TRACS International to study the oil and gas reserves underlying the Heletz field. Reserves are estimated at 20 Moilbbl of oil to as high as 100 Moilbbl.

Tomco Energy had its shares suspended on 11 February 2009 stating contractual difficulties relating to the financing of its Heletz oil field operations.
The source of this article is wikipedia, the free encyclopedia.  The text of this article is licensed under the GFDL.